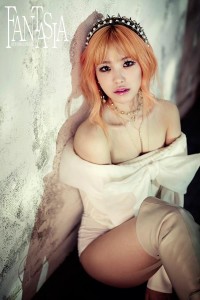 After releasing her first solo last year, Top Secret with the jam “Goodnight Kiss,” Secret‘s Hyosung has released her second mini album, Fantasia. During her showcase, Hyosung mentioned that some people think her music is for the eyes and not the ears. You can’t really fault her for that, considering how much her looks and performances get attention – she’s gorgeous with a nice figure. But, she also pointed out that she wanted the album to have great tracks, which, overall, Fantasia succeeds.

The mini album kicks off with the promising track, “Come See Me.” If you’ve listened to Secret for awhile, you know that they are prone to having jazzy tracks, and this time it’s no different.  The song starts off with a saxophone introduction, and the saxophone continues throughout. It adds a bit of jazz to the R&B style. This more sultry sound matches well with the lyrics; Hyosung beckons a man to come to her and to not play games. With her breathy voice, “Come See Me” evokes a strong feeling of intimacy and perhaps a bit of desperation.

When “Into You” starts, there’s an anticipation. There’s a nice piano, which makes you think we’re about to hear a nice ballad. However, the rest of the song kicks in, and the music is really nothing special. A combination of classic Secret (i.e. “Madonna”) and Spice Girls, the track is rather lackluster and comes off as lazy and generic, especially when compared to the rest of the album. The only connection to the first song is the saxophone which makes an appearance at one point of the song. Hyosung also tries her hand at “rapping.” Hana need not worry about her role in Secret, as Hyosung sounds like every other female idol trying to rap when they can’t.

It’s a bit of a shame that the title track is the least pleasing on the mini. While the song discusses being shaken at first sight, it doesn’t do much shaking of the heart and senses. “Into You” just doesn’t hit the right notes, so to speak. That’s not to say it isn’t catchy (it is), but “Into You” isn’t quite as standout as hoped. Luckily, it’s the second track, so there are better tracks to follow.

According to Hyosung, “Taxi Driver” is about the loneliness hidden behind fancy lives. It sort of seems like a conversation with a taxi driver — telling him the direction to go, then lamenting heartbreak, loneliness, the rain and being drunk. The song combines a Latin-influenced guitar with harmonicas and whistling. This combination adds a bit of a vintage sense, and you can almost feel the desolation. Given that Hyosung is mostly singing in a lower register, the song has an even sadder aura.

“Was It a Dream” is a sweet acoustic ballad and showcases Hyosung’s vocals. Yes, she’s not the greatest singer, but the feelings she puts into the song itself more than make up for that. The song stands out in that it’s the only non-danceable track on the album.

Without looking at the lyrics, the simple production gives the general feel of bittersweet-ness. However, after looking at some rough translations, the song is just bitter — which fits in quite nicely with the previous song. Hyosung’s relationship is over, and she only has warm dreams of her past and is questioning her future in love. 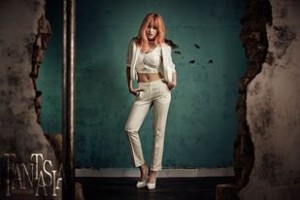 To close the album, we have “5 More Minutes.” The song is a slower pop dance song, complete with a slick guitar break. I admit, reading the title of “5 More Minutes” made me think of Lee Hyori’s “10 Minutes” — especially given how Hyosung covered the song. Sadly, this wasn’t another song like that, lyrically speaking.

The idea of Hyosung singing about seducing you in 10 minutes would probably thrill fans and bring her a lot of netizen hate, but it would still be great. Instead, this song is about hesitating and wanting just 5 more minutes to see what will happen. The lyrics of “5 More Minutes” seem a bit prophetic, in that the ending is open and leaves you trying to figure out what’s next. Did they forget the ending of the song? Or are they just teasing us?

If we leave out the title track, Fantasia is a solid mini album for Hyosung. It takes bits of the Secret flavor and R&B to create a rather classic pop style. Listening to it, you are taken back a few years due to this classic feeling. While not ground-breaking, it’s still quality work that provides a distinct style for Hyosung instead of completely regurgitating her group’s music or that of fellow member Jieun. Hyosung also tries her hand at lyric writing for “Come to See Me” and “Was It a Dream.” That’s a big step for her and hopefully she’ll be able to keep participating in her music. Overall, Fantasia is a pleasant piece of work. 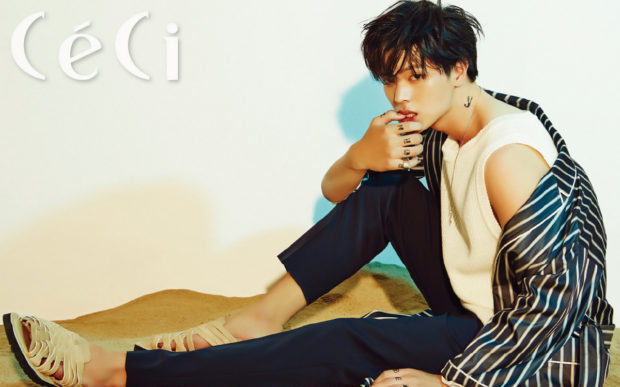