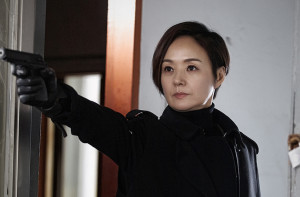 SPY is now in hitting its stride. With the show rapidly approaching its conclusion, a few more things have started to fall into place, mostly details pertaining to Hye-rim’s past and how it ends up coming full circle and affecting her present-day family life. If it wasn’t already clear from earlier episodes, the relationship between Hye-rim and Ki-chul is much more complex than initially hinted at in the show’s first four episodes.

It’s clear Ki-chul and Hye-rim’s relationship went far beyond agent and supervisor — with a bit of fun off the record. No matter how tunnel his vision may be, Ki-chul’s affection for Hye-rim seems to hinder his performance. When he’s too slow to get the information his higher-ups want, they send someone from their pool of insurgents. Oh Tae-shik is young and arrogant. He’s also wild and loose, willing to do just about anything to prove he’s the big, bad wolf. Characters like that always get theirs in the end, but for now, his arrogance makes him dangerous.

Meanwhile, as a means to regain some control over a situation he’s been in charge of for quite some time, Ki-chul meets Sun-woo in private and gives him an ultimatum: join his side and keep his family safe, or kill him and his life is pretty much over. The lighting and camera direction give the scene the needed suspense; however, the dialogue and Jaejoong’s somewhat put-on intensity adds a campiness to the scene I’m sure no one planned for. They use the same old “conflicted hero” trope: a shot of Sun-woo pulling the trigger only to hit at nothing but air because he has to make a tough decision. 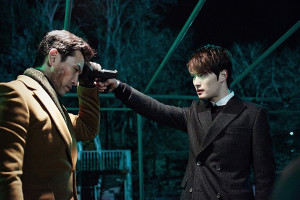 That being said, Jaejoong’s interactions with Ki-chul are the most convincing among the many he has with any other character. He plays pissed off and impatient rather well. He’s got incredibly expressive eyes when he’s doing any acting that requires him to show intense emotion. It’s not always easy to use the subtle cues of the eyes to interpret a scene instead of the “loud” acting we see from many of his peers (yes, including band mate Park Yoochun), so kudos to Jaejoong for pulling it off convincingly.

As SPY’s plot continues to unravel, we begin to see more layers of Ki-chul’s character, and it adds a depth and dimension that I was actually surprised to witness. Writers Han Sang-woon and Lee Kang wrote Ki-chul as somewhat of an antihero. He honestly believes what he’s doing is for the good of his country; however, his ways and means are ruthless. He’s very exacting, doesn’t waste words or actions. He has one goal, and he’s as precise as possible without being sloppy — except, of course, when it comes to his lingering affections for Hye-rim.

Then there’s the complicated love story between Yoon-jin and Sun-woo. Quite frankly, Yoon-jin is really terrible at hiding anything. If Sun-woo didn’t at least suspect Yoon-jin of being somewhat tangentially involved with Ki-chul, then they’ve made Sun-woo a very weak character with a flaw that’s hard to overlook. He’s an NIS agent who’s been in the field, yet he lets his emotions blind him to what’s right in front of him. It’s not as if Yoon-jin is particularly crafty or even remotely good at concealing her thoughts. He’s human, yes, but to be so easily distracted and off his game around his girlfriend when he essentially shouldn’t really trust anyone is very hard to believe. As one of the NIS’s top agents, he should be able to read body language, especially body language as obvious as hers. But he’s so blinded by his love for Yoon-jin that he doesn’t recognize signs of her being overtly suspicious. 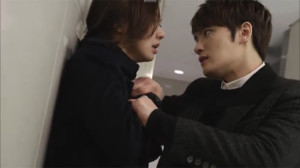 SPY has some pretty decent action sequences, allowing audiences the chance to see Jaejoong’s ability to handle physicality. Surprisingly, as the show’s hero, Sun-woo hasn’t had to engage in nearly as much combat as one would expect an agent caught in the middle of a political power struggle. The fight scene between him and Hyun-tae in episode eleven is a slightly awkward; however, it’s not as exaggerated as some I’ve seen. It’s interspersed with random bits of dialogue, which I suppose is meant to highlight how even spies are human with conflicts of conscience. Even Hyun-tae falls victim to his personal vendetta against the supervisor. It clouds his judgment, to the point that Sun-woo can use that fact to distract him enough to subdue him and steal the hard drive to get his girlfriend back.

There’s an unfortunate amount of exposition in the episode, which is probably what makes the fight scene a bit underwhelming. The end of the fight sequence was actually the best executed. Sun-woo finally gets Hyun-tae subdued, then tells him to remember to breathe. This bit of off-hand commentary is actually not only effective to show their relationship and their humanity but also to add humor to a scene that was kind of unintentionally funny because of how awkward it was. I will say this, though: if Jaejoong is doing his own stunts, he’s got pretty decent form.

The second fight scene at the end of episode twelve between Sun-woo and his ex-girlfriend was also subtlety choreographed and was more about the lingering emotions between the two than any actual need to do harm. Yoon-jin proclaims she doesn’t want to fight him to get past, but there’s not even a moment’s hesitation on Sun-woo’s mind, and he goes all in, earning his title as one of the NIS’s rising stars.

While many have a hard time with Go Sung-hee in general, I have a much harder time with Bae Jong-ok’s performance. It’s either very exaggerated or randomly stilted. It’s rare that I have a problem with a veteran actress’ performance. In fact, in pretty much all the dramas I’ve watched, they’ve stolen the show. However, whether it’s the way Hye-rim was written or the way Jong-ok interprets the role, she’s inauthentic to me and doesn’t really sell her character. 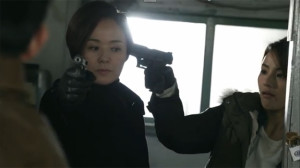 Unfortunately Hye-rim is written poorly. She’s so soft, and being so entrenched in her family life, she doesn’t realize when she’s being double-crossed or even when someone’s behind her. This in and of itself is a contradiction, considering the whole premise of her character is she’s so desperate to keep her family safe she tends to be overprotective. But even in that respect she struggles. Eventually her inability to maintain her secret catches up with her, and now she’s got a loose grip on the family she’s trying desperately to protect.

Which leads to the precarious dynamic between mother and son. From episode six on Sun-woo’s rather cold-hearted toward Hye-rim. His anger is understandable, and from his tears (very well acted, by the way, Jaejoong), you can see it hurts him to be so harsh to his mother, but there was a better way to get his point across. These scenes reveal a bit of petulance that makes his character seem childish. He wants to take responsibility and wants his mother to respect him as an adult, but again his way of going about it is a bit childish.

This could very well be the effect of allowing love to completely subvert his nature. The pain and confusion in his eyes when Yoon-jin confesses that she’s been using him for the entirety of their relationship is palpable. His impulse to choke her may have been a bit excessive; however, the stress of what he knows about his mother and being used as a scapegoat reveal a bit of madness resting right below the surface of Sun-woo’s psyche. Finding out his girlfriend has been lying to him breaks something in him. 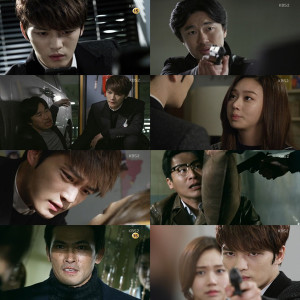 Jaejoong has mastered the art of subtlety. He doesn’t reach for too much in moments of high tension, and in the later episodes, he seems to be more comfortable in Sun-woo’s skin. However, the most convincing character is Ki-chul. He’s ruthless, honest, and does things by his own book of morals and standards. When he says he’s going to do something, he delivers with cool precision. However, there’s a small level of humanity that seeps through whenever he interacts with Hye-rim, and while that may point to weakness, it also means he’s able to channel it to his advantage when things get serious.

By far and away the most standout aspect of the show is its cinematography. SPY definitely owes much of its viewership to the director and DP. We open episode nine with a flashback of Hye-rim in North Korea, followed by a series of images of Sun-woo growing up. This shot alone is a testament to the show’s beautiful shooting and editing. In episode ten, we’re gifted a gorgeous shot of Sun-woo’s reflection at the shooting range. The lighting and camerawork in this scene sell the episode. Later on in episode ten, we get even more brilliant camerawork, showing Sun-woo and Hye-rim’s cars passing each other in their back windows.

As the final four episodes come upon us, Sun-woo begins to show his mettle, and Jaejoong’s performance is indicative of that agency. I’m actually quite interested to see how this show reaches its conclusion. I’m hoping despite Yoon-jin’s intentions that relationship has been left to die. I don’t hold out much optimism that the show’s creators will do away with the love line, but one can hope, right?­