Pinocchio, Episodes 1-4: Truths, Twisted Truths and the World of Media 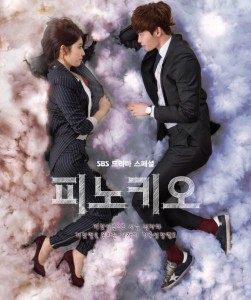 In a world in which the success of media is based off the size of its audience, the question arises: to what extent may journalists alter truths to gain attention, and what are the implications of these actions on others? The writer and PDs of I Hear Your Voice have reunited for the production of Pinocchio, a new drama on SBS. Pinocchio is a drama centered around journalism and, similar to I Hear Your Voice, the theme of honesty. The title of the drama refers to a fictional disease, the Pinocchio syndrome, characterised by the act of hiccuping when one lies.

The drama’s male lead, Choi Dal-po (played by Lee Jong-suk), is an intelligent man and a filial son with a tragic back story. Originally named Ki Ha-myung, his birth father was killed in a firefighting accident, in which he and his team entered a burning building after having been misinformed that there were still people inside. All members of the team were reported dead except for Ha-myung’s father, whose body was not found and therefore recorded as missing. After an eyewitness account from a Pinocchio claiming he had seen the firefighter after the accident, the media and public shifted the blame towards Ha-myung’s father, accusing him of being responsible for the other firefighters’ deaths by ordering them to enter the building, and going into hiding after the accident. 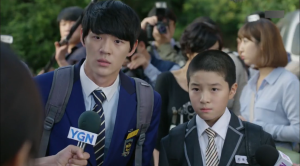 With the twisted version of the story going around, Ha-myung’s family (consisting of Ha-myung, his parents and his older brother) was shunned by the community and constantly pressured by reporters, until the suffering drove Ha-myung’s mother to commit suicide by jumping into the ocean with Ha-myung. But here’s the twist: Ha-myung survived. We learn from Choi In-ha’s back story that Ha-myung was saved by her grandfather, who, having memory problems, believed he was his dead son. He therefore took Ha-myung in, and Ha-myung consequently adopted the grandfather’s son’s character and his name – Choi Dal-po.

Choi In-ha (played by Park Shin-hye), the drama’s heroine, is a surprisingly blunt Pinocchio and an aspiring reporter, driven by the belief that reporters are people who always tell the truth. As a child, she moved in with her grandfather after her father divorced her mother, and despite the disapproval of her father, she constantly pines for her mother. Her relationship with Dal-po is technically uncle-niece, but most of the time they interact like close friends. Furthermore, in the world of k-dramas, it isn’t surprising that Dal-po is revealed to have a crush on In-ha as well, stemming from her truthfulness (although she doesn’t have much of a choice).

However, there are some key complications with Dal-po’s affection towards In-ha. For one, In-ha’s father disapproves of Dal-po, which is an amusing twist on the traditional k-drama mother who gets in the way of her child’s relationship. The drama also mentions the “six degrees of separation” concept, and this is shown by the unfortunate connection between Dal-po and Song Cha-ok, a former reporter he loathes for aggressively attacking him and his brother with questions after his father’s disappearance. Cha-ok is in fact In-ha’s mother, and Dal-po’s initial realisation of this sparked some degree of hostility in him towards In-ha. 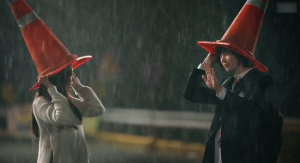 Furthermore, the small world phenomenon appears to be a recurring motif within this drama. Dal-po has crossed paths with two of the reporters – Song Cha-ok and Hwang Gyo-dong – from his childhood, Dal-po and his brother have missed each other on several occasions by only a hair’s breadth, and Dal-po’s brother had also come across the employees who sent his father and his team into the building during the fire. I would argue that the relationship between In-ha and Cha-ok adds an interesting touch to the storyline, but on the whole, although the coincidences in the drama are helping move the plot along, the frequency at which they are occurring is making the drama slightly unrealistic.

The plot of the drama is relatively original and, at times, quite thought-provoking. During the final round of the reporter selection process, Dal-po confronts In-ha in a roundtable debate on Dal-po’s father’s case. In-ha, a Pinocchio herself, argues that the eyewitness only told what he believed to be true, and the reporters merely relayed the words of the witness — therefore, no one was at fault for the consequences. Dal-po, however, the victim in the case of discussion, shoots back that because Pinocchios and reporters are known to only tell the truth, their carelessness in conveying unverified information put them at fault. Both have a point when you look at where they’re coming from, which makes one realise there is a lot of grey area between what a reporter should or should not do. 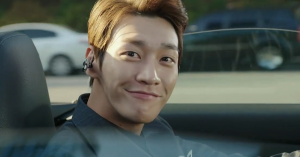 On the other hand, the plot does fall into the occasional clichés. We have the standard love line between the main leads and the many obstacles in their way. More recently, this love line has also developed into a love triangle with the addition of a chaebol, Seo Beom-jo, who had been receiving texts from In-ha to her mother for years. What is redeeming about Beom-jo’s character is that, instead of adopting the traits of the stereotypical chaebol character, he’s more of a beguiling creep – his constant staring at In-ha and the fact that he kept her texts to her mother comes off as strange, but his wide grin is also quite comically charming.

Finally, the drama demonstrates an excellent execution of both emotional and humorous moments, sometimes side-by-side. In one heartbreaking scene we see Dal-po dreaming of his birth family, eyes filled with tears of joy, his desperation to believe the dream is real shown by his elation in being able to feel the texture of the tablecloth. In the next scene, we see that Dal-po is in fact feeling the fabric of In-ha’s skirt as she stands by his bed, earning him a punch as a wake-up call and effectively resolving any tears that may have formed into a laugh.

Overall, Pinocchio is off to a promising start. The drama has several flaws, but they don’t interfere with the enjoyment of the plot and the characters on the whole. If you are uncertain about whether you should give it a try, I would recommend you do. And if Lee Jong-suk’s horrendous wig is what’s deterring you, don’t worry – he eventually takes it off!