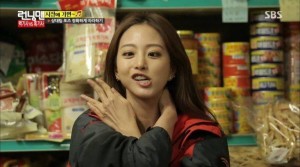 The last week in K-popverse brought us another couple of promising K-dramas in Pride and Prejudice and Birth of a Beauty, along with more K-pop comebacks and debuts and tons of laughter on the K-variety front.

The following are my picks for the best 5 Things that happened in K-pop last week. If you are not up-to-date with your K-pop, K-dramas, etc. and don’t like spoilers, do not proceed. You have been warned.

Some things never change, while others definitely do.  But with the Nation’s Siblings, Yoo Jae-suk and Lee Hyori, you can count on it always being fun. Yoo Jae-suk and Jeong Hyung-don traveled to Jeju Island to visit Lee Hyori and coerce her into joining their special concert for an Infinite Challenge special called S.S.S (Saturday, Saturday is for Singers) in which all the Infinite Challenge members are trying to gather up all the top star idols from the 1990s and early 2000s for a concert. S.E.S′ Bada, H.O.T′s Kangta, Sechs Kies′ Jang Soo-won and Kim Jae-duk, So Chan-hee, Kim Hyun-jung, Turbo′s Kim Jong Kook, and the legend himself–Seo Taiji. It was good seeing Hyori, she looks happy and content living on a farm in Jeju with her husband Lee Sang-soon (well, in the parts other than the clip below). If you are a Family Outing fan like me, you’d know how good it was to see Jae-suk and Hyori back together again.

Or did you diss me? MC Mong makes his return to the Korean Entertainment scene with the release of his 6th album Miss Me or Diss Me and the release of the title track and MV of the same name. The track features Jinsil of Mad Soul Child and addresses the trials he suffered the past five years after being accused of draft dodging. Upon its release, the album shot to the top of the charts with most of the songs ranking in the top 10 — making it seem like most definitely have been missing MC Mong. Unfortunately, MC Mong will not be appearing on any shows to promote the album. As for me, I’ve definitely been missing MC Mong and am glad to have him back, or his music at least.

3. Super Junior Passes out of Sight?

It’s an aptly titled song for a K-pop group that just celebrated their 9th anniversary this week. Has Super Junior‘s time in K-pop reached the point of evanescence? My guess would be not quite yet — they’ve withstood scandals, military duty and a marriage announcement so far — so I think they have a few more years to go. “Evanesce” is one of my favorite Super Junior songs to date and the MV was the opposite of the song title’s connotation — solid.

Seo Taiji made an appearance on the latest episode of Yoo Hee-yeol’s Sketchbook where he sang his new songs and some of his old hits. I loved his performance of his hit song “To You,” which happens to be the only of his many songs he has allowed to be remade, by Sung Si-kyung for the Reply 1994 OST. If you’d like to know why he allowed Sung Si-kyung to remake “To You,” check out his appearance on Happy Together 3, his first variety show appearance in ten years, where he discussed many topics about his past and career with the hosts — a must-see if you want to learn more about the legendary Seo Taiji. The episode originally aired on October 10, but KBS World just released the fully English subbed video on October 30. The more I see of Seo Taiji and the more I listen to his music, the more I understand just why he was (and still is) such a huge figure in K-pop.

It was a bittersweet ending to The Three Musketeers as love was found, friendships and loyalties were tested, and once again the good guys never quite seem to win. I hardly watch sageuks, mostly fusion saeguks if anything, because I just can’t stand to see how people’s lives could be so drastically impacted by the whim of royalty back in the day. It just really pisses me off, and the antics that happened in The Three Musketeers were no exception. There were parts of the drama that were wonderful like the bromance between Park Dal-hyang and the Three Musketeers, but those moments were few and far between the other bogged down moments of story-telling. I’m a bit baffled at how the next two “seasons” of the show are going to proceed — will the same cast be coming back for each? If not, then I’m going to be seriously upset that we didn’t get a better story line in this first season. I do have to say that it was one of the best performances to date for Jung Yong-hwa — he’s still not a great actor, but he’s getting there.

Those were the 5 Things I LOVED in K-pop last week, were they yours?  Seriously, I want to know.