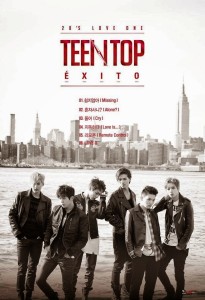 For anyone doubting that Teen Top would ever break out of their naughty teenage boy image, the future is now! Not only has Teen Top broken away from their sassy dance tracks in EXITO, but they’ve gone so far in the opposite direction that it’s almost difficult to believe this album is coming from the same group. Of course, you can still tell that it’s Teen Top, but the level of emotional and musical maturity goes above and beyond expectations.

At first glance, the group’s title track is more subdued than its previous single releases. But I’m not singling it out. Look at the entire track list and you’ll see that the song titles on the rest of the album have taken an overall somber tone. The titles also foreshadow the lyrics of the songs. There’s great deal of contemplating love and loss, and I can only hope that the lyrics aren’t from Teen Top’s personal experiences, because boy, that would be depressing.

For those who won’t listen to the whole album, the single track alone will be enough to get across the love-lorn tone of the album. Considering the MV, you’d think that “Missing” is the saddest song on the album, but no, it’s actually one of the most upbeat ones – which is saying something. Partially because of this, it is the only song I can imagine as a single. I don’t say that because I think it’s the best song on the album — certainly not — but it’s the only one with a catchy enough beat. 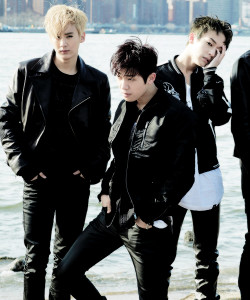 There are two songs on this album that I consider “best” and they’re tied between “Cry” and “Love U.” Both songs are serious ballads though, and unless you’re 2AM, that wouldn’t be the type of music to go with as a promotional single. This is somewhat of a crying shame because I’ve never been more impressed with Teen Top than I am with their performances on these two songs.

As I mentioned before, it’s almost difficult for me to believe that this kind of emotional depth is coming from Teen Top. I’ve always enjoyed the group’s music, but never have I placed them on the same level as 2AM, K. Will, or Busker Busker, when it comes to eliciting emotions from the listener – until now.

In “Cry,”for example, the high notes are exquisite; the pauses in the lyrics with the piano in between are pure perfection; the acoustic background music carries the listener gently; and all of it forms into the best melancholy sound possible. The lyrics are about a man who continues to pine for his ex-girlfriend. It’s a sad concept and the guys manage to convey their feelings in song, so that it penetrates the senses. My only complaint is the rapping, which I feel is completely unnecessary, but given how the song plays out, it’s easy to overlook.

Similarly, “Love U” is filled with emotion, and it has a sound that builds, and builds, and builds. It starts out very simply – musically and vocally – but then it adds layers of complexity. Another voice comes into the harmony, and another instrument joins the melody to deepen the sound. Finally, the crescendo near the end takes the song to another level of greatness. The lyrics are about loving someone so much that you want to stop time and stay with them no matter what, even if that’s selfish. Something about the refrain of “I love you” combined with the swell of the music gives me goosebumps in a way only truly beautiful songs do. 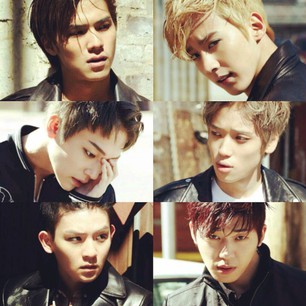 The other tracks are perfectly fine, but they pale in comparison to these two. “Cry,” and “Love U” are certainly the stand-out numbers on EXITO, with the single “Missing” coming in close. Even though the other songs may not have wow’ed me like the ones previously mentioned, they’re still more mature in sound and execution than much of Teen Top’s past work.

“Alone?” is the other upbeat, playful track on the album. The chorus and the “hey, ho” refrain give it a 90’s pop feel and the rappers get a chance to shine. “Love Is…” starts out catchy, so it immediately grabs the listener, but it turns out smooth and sexy, slowly winding down rather than grabbing listeners with an evocative tune. The lyrics talk about a relationship in limbo, so that may account for the middle ground tone of the music. Finally, “Remote Control” is sort of a mixed bag. The chorus is very catchy and the rap sections are good, but the verse is just monotonous. Plus, the heavy amount of synth and spaceship noises seem a little over the top.

EXITO is a very solid mini album as a whole, but it is the ballad gems within the track list that make it an album worth listening to. To find two songs so incredibly moving and musically mature was not what I expected from a Teen Top album — it’s a very pleasant surprise. I’ve enjoyed many of the group’s B-sides in the past, but I can safely say that the songs on this album are by far the most impressive I’ve heard from them. No, this isn’t the happy, catchy, dance-able pop we’ve come to expect from Teen Top — and that may disappoint some people — but to me this is even better.

Surprised by Teen Top’s shift in gears? Leave your responses in the comments section below!