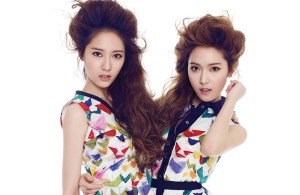 Someone should probably have come up with this idea earlier, but if you’ve heard the news, the industry’s most sartorially sophisticated sister duo has confirmed their reality show! The show, which will air on cable channel OnStyle beginning 6 May, will feature an exclusive peek into the well-dressed lives and times of Krystal and Jessica Jung, members of SM Entertainment-produced girl groups f(x) and Girls’ Generation respectively. Since the announcement, the sisters have been to LA and back, hobnobbing with the people behind W Korea, Jimmy Choo shoes, and whatever it is these rich and famous people do.

We’ve been generously bestowed plenty of photos of this genetically superior duo wearing shoes and deceptively casual outfits that could probably collectively pay off my (impending) college debt, but news on what’s actually going to happen in the show itself seems somewhat lacking. Despite the combined star power and attendant rabid fandoms of the JungSis, OnStyle has been all kinds of detail-shy regarding what the programme is actually going to be about. Official statements from the channel include such specific and detail-heavy statements as “the sisters’ extraordinary fashion sense will be revealed” and that we will be offered insight into the sisters’ personal relationship and dynamic. 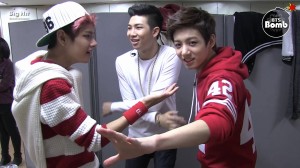 Idol-centric reality shows centre upon selling not merely the idol’s performative talent, but their personalities, hobbies and everyday life; that is to say, marketing a lifestyle. In recent times this has gone a step further — the presence of channels, while increasing the reach of these shows, are no longer necessary, as can be seen in the emerging phenomenon of Youtube reality. You don’t necessarily need a channel and fancy cameras and teasers: on Bangtan Boys‘ (BTS) BangtanTV, for instance, you can catch up on low-budget, no-frills videos of Jung Kook going to high school, some fairly dubious dance covers of “Something”, and pretty boys in strange ladybug costumes.

Neither Jessica’s nor Krystal’s groups have been particularly camera-shy of late, or ever, really — their variety presences, at least as part of their units, has been felt since their respective debuts. The public has an idea of what to expect from them in terms of on-air personalities, given that neither sister has had a drastic public image change since debut. There doesn’t appear to be much potential for some really, really fresh material on this show. It seems unlikely that individuals who weren’t already fans of either sister (or their groups, by extension) would tune in, which defeats the purpose of the idol-centric reality show being a tool through which to lure in more admirers of the idols.

What then to expect from this show? One could pinpoint the angle on fashion this show could give, but neither sister is particularly extroverted; Jessica is somewhat reserved, while Krystal seems almost shy in some variety appearances.In the case of the Jung sisters, their variety personas are largely reaction-based; that is to say, their entertainment value feeds off the interactions and entertainment value of their group members and the show hosts. They hardly seem like the sort to fling open their wardrobes for cameras and crew. The show could, of course, feature how the sisters put together outfits and looks in their personal time. Well, there’s the airport runway for that, isn’t there?

Just to be clear, this isn’t a diss on the Jung sisters’ fashion sense or personalities, or even the fact that they’re doing a show together. Sometimes we just can’t help the way we are, these sister-sister things are always fun, and it’s natural for them to want to work together on a joint project larger than the occasional SMTOWN stage or variety show appearance.

It might be worthwhile, though, as consumers, to think about what is it we want to see in variety show programming, especially given the rise of the home video as a means of promoting idols. Anyone can now pick up a camera and do silly things you’d typically see being done on a variety show without actually needing to go through the hassle of broadcasting stations, third-party editing and scheduling. The exclusivity of the idol reality show to channels and the value-add they offer to idols’ public images and broadcast stations’ bank accounts is fast becoming a rare commodity.

Given the expertise and funding available to broadcast stations, however, it seems reasonable that idol-centric reality shows on television could go above and beyond the usual show and tell in terms of how effectively they actually promote the idol groups and bring (likely financial) benefit to the companies themselves.

How do you think idol-centric reality shows on television could retain their competitive edge and appeal? Do comment below.