Sunny Hill's New MV Makes Them the "Darling of All Hearts" 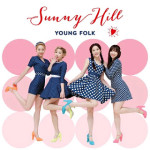 Sunny Hill has gone through a number of structural transformations since their creation in 2007. Although they started out as a trio, the group has since become a quintet and that is the version of Sunny Hill most people are familiar with. Currently working under LOEN Entertainment, this unique co-ed group has experienced nothing but increased popularity in recent years. Although member Jang-hyun is currently serving his military time, the group has continued on as a four member girl group for promotions since his enlistment, including their most recent single, “Darling of All Hearts.”

Sunny Hill has gone with a different image for “Darling of All Hearts” then their successful past singles, such as “Midnight Circus” and “The Grasshopper Song.” Those two MVs had intense visuals and a dark element to them that came across as almost creepy. On the exact opposite end of the spectrum, “Darling of All hearts” is an upbeat song visually represented by bright colors, gaudy patterns, and feel-good animations. The sound of the song is different as well and this is partially because it features Hareem, a musician famous for his ability to play many traditional instruments.

The song’s lyrics talk about being a single person that friends always come to for relationship advice and comfort, but ignore when things are going well again for them. Although the song talks about how frustrating this situation is, it also ends by saying that having lots of friends and being romantically alone can be just as good as dating. The MV expresses these lyrics in a cute and quirky fashion by finding ways to express the feelings in a literal way.

This literal translation of the lyrics into actions in the MV is done very well. When the character says that she “rolls around” in her lonely bedroom the character in the MV actually rolls herself up in a big comforter. Similarly, in that same verse, the idea of taking tea and coffee in one shot is visually represent by a full cup of liquid being suddenly empty. The cup is left with only the residue of the beverage it once held, making it seem like the character did really gulp it down all at once. 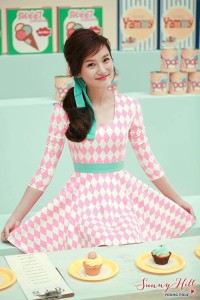 Some of the lyrics, however, are expressed figuratively, such as the line about wasting money and having “poverty amidst plenty.” What the lyrics are expressing is the lack of love in the person’s life, while everyone around them has plenty of it, but it is expressed visually by the character having a long line of half-eaten cupcakes. She is filling up her life with all of these baked goods, but it is a waste because she can’t possibly enjoy them all, so although she has plenty of cupcakes she is still experiencing satisfaction poverty.

As for the visuals of the MV, the use of animation is melded perfectly into the MV as whole because of the overarching themes. The background sets and the outfits already look vaguely cartoonish because of the bright colors and the big polka dots and stripes, so the addition of some actually animated parts didn’t feel out-of-place. In fact, the animations greatly enhanced the overall whimsical feeling of the MV. For example, during the second group dance sequence you can see a tiny version of Hareem walking along the top of the screen walking and leaving a trail of floating blue bubbles behind him. This was a startlingly funny and adorable detail, which is how most of the animations in the MV were. 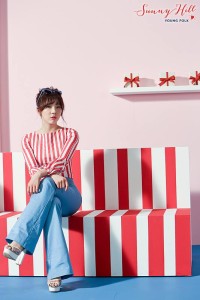 The styling for the members of Sunny Hill and the dance both felt like a fusion of country folk music and classic ’50s style. The clothing and hair styling certainly leaned toward a retro feel that was similar to popular fashions in the 1950s. The high-waisted pants and circle-cut skirts and dresses covered in polka dots were very reminiscent of young ladies’ fashion in the US in the ’50s, as was the short, waved hair and the high pony-tail with a headband. The clothing, although clearly over the top as far as patterns on the fabric goes, gave an attractive feminine feel to the MV without being overly “sexy” or being “cute” to the point of looking infantile.

The dance plays off of the folk music sound of the song by adding lots of leg and foot work that looks like traditional clogging or step dancing. They also throw in some classic retro moves in as well, such as The Charleston. It’s a fun dance that fits the mood of the song and the styling, but it isn’t anything overly technical or difficult. The point dance is the moment when the members sing the word “love” and put their fingers up in an “L” shape. This is the best kind of dance for a fun summer song like this because everyone can do it and look cute.

Although the aesthetics of this MV are certainly bright and cheery, unlike some of the group’s previous work, the style still feels like Sunny Hill. The use of interesting animation work and big, brightly colored patterns made the MV’s visuals pop, but it was done in a way that didn’t overwhelm the viewer or become too cluttered. This MV and this song are the perfect combination and I’m glad to see more unique, exemplary work from Sunny Hill. Overall rating: 5/5