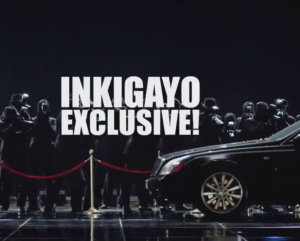 Welcome back to another installment of  Best of Weekly Music Shows! Shinhwa nearly swept up the wins this week with their song “This Love,” save for SBS‘s Inkigayo, where Lee Hyori won with “Bad Girls.” We also saw Exo, 100% and CL make their comebacks while Secret and Tara N4 bid farewell.  Unlike recent weeks however, which were filled with special stages, anniversaries, and festivals, it was pretty ho-hum around the music show circuit this week. Despite this, I think there were a few performances worth highlighting:

Shinhwa was certainly on a roll this week, and “This Love” is as fabulous as ever.  I thought it was hilarious watching Jun Jin and Minwoo host Music Core, only to hand the trophy over to their own group.  My favorite performance however, was at Show Champion, which included an entertaining segment called “Shinhwa TV.” I wish I had English subtitles to provide, but alas, I couldn’t find any.

As for our second winner this week, Lee Hyori, she was actually on the top three list for both “Miss Korea” and “Bad Girls” on Inkigayo (the other nominee was 4Minute). Does that mean that she had a huge chance of winning? Probably? Regardless, Hyori continues to be awesome, and that’s all that matters.

Exo’s stage I picked not for their live vocals (do they ever sing live?) or even their meh song, but for the presentation of the stage alone. I loved all the camerawork, lighting, and how confident Exo looked lip-syncing (which was something I never saw in the “Mama” performances). The theatrics of the “Wolf” choreography never looked better, and those fanchants? I think I could pick this performance just for that.

(Although, I do have one other complaint. What is that thing Kai was wearing????)

Since we all know that YG has SBS twirled around its little finger, it should come to no surprise that Miss Baddest, CL, made her solo debut on Inkigayo. The song is still lackluster, but CL owns the stage better than anyone else. With the kind of commandeer that CL has over her audience, she can even get me to “do the Unnie!”

In all likelihood, I probably missed some other great stages considering that there’s an overwhelming amount of Inkigayo here. What were your favorites this week?