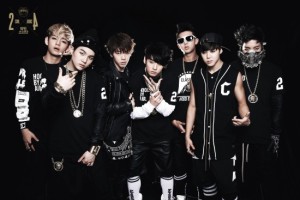 The Bangtan Boys, alternatively known as the Bulletproof Boy Scouts or BTS, have been teasing about their debut for half a year. It’s been through small things, pre-debut clips, features with other artists, a couple of music videos and dance practice videos. The group’s YouTube channel, BangtanTV, started off in December 2012 with a piece by leader Rap Monster. That, and the pieces that followed, with the one that’s probably become most recognized — “School of Tears” — by Rap Monster, Jin, and Suga, set to Kendrick Lamar’s “Swimming Pools.” This manner of promotion wasn’t obvious, but was likely to have been useful to Korean fans, as a lot of the videos feature the boys talking. Nevertheless, it was a transparent one, introducing all the members but V, and their skills prior to debut.

The group’s debut single album, 2 Cool 4 Skool, comes with three songs — an intro, an outro, an interlude, and a skit — making for a seven-track album that takes up a tad over 20 minutes. The album’s strongest point is clearly rap, which plays a large role in each song.

The first track is the “Intro” featuring DJ Friz. It’s a pretty neat scratch that takes time to say the company’s name, the group’s name, and the album’s title.

Next is “We Are Bulletproof Pt. 2,” which plays strongly on their name, Bulletproof Boy Scouts. It’s part 2 to their pre-debut, “We Are B.P.B (Bulletproof).” It’s mostly what it sounds like from the English lines, a song that focuses on boasts, announcing their entrance into the music scene and their talents. It’s a strong listen, playing around with loud thuds and faint sirens to match the hype of the track; it’s a song that demonstrates excellent potential and builds up anticipation for the rest of the single.

“Skit: Circle Room Talk” sounds like the seven members are discussing their music and performance, but as I haven’t found subs for the conversation, for a non-Korean speaker, the skit doesn’t have much meaning. The skit clocks in at a little over two minutes, which is too long listen through when going straight through the album.

“No More Dream” is a little like “We Are Bulletproof Pt. 2” with the background sounds used. The song is firmly in hip-hop territory and frankly is a great jam. The lyrics, when separated from the MV, are also admirable with the repeated questioning of what your dream is, along with the promotion of living life with a greater measure of control over your own future. The theme fits with the “2 cool 4 skool” attitude, as well as the ages of the members. The use of bass in the beginning sets the tone for the song and continues throughout as a good undertone.

The “Interlude” is a good calming agent after “No More Dream,” serving as a buffer before “I Like It.” But other than that, it doesn’t have much of a function. It doesn’t go anywhere. There’s a slight build of sounds, but it ends abruptly. It’s not long enough to make a decent impact, and it doesn’t leave an impression.

“I Like It” is a smooth R&B song and put together well. The beat is just soft enough, and in combination with the husky vocals during the chorus, it achieves an intimate effect. As expected from the rap-focused group, there’s plenty of rap verses that flow fairly well into the chorus. The vocals and rap are performed with plenty of rhythm and variation. However, as the only track on the single that gives a glimpse into the vocal ability of the group, it falls in terms of showcasing some kind of strong vocal ability to bring the voices together.

Last is “Outro: Circle Room Cypher.” From the start, the song sounds like it would be another length of conversation, five and a half minutes of it. But slowly, the music is introduced and the sound changes instead to what seems to be a fun rap battle to end the album. All of BTS takes part in it, which makes it a good listen and fairly good measure of their skills. Clearly there are some who are better than others, but they all have some basic ability in rap, which is more than can be said for most idol groups.

As a whole, 2 Cool 4 Skool is one of the stranger debut singles. It’s longer than what is usually considered a single, but the three major tracks provide a good sense of the group’s potential, while establishing a solid image for the group, which is primarily led by the rappers. Of note are their lyric-writing skills and commitment to commentary on school issues, and this extends from their pre-debut work. Of the members, Rap Monster, Suga, j-hope, and Jung-kook, in various combinations, all took some part in writing lyrics for their main three tracks. 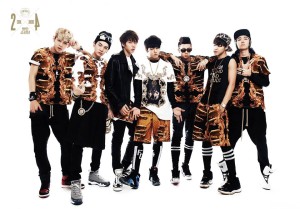 The structure of the album is like that of a K-hip-hop album, but lacks enough tracks to make any of the breaks feel effective. The inclusion of the skit broke apart the momentum built by “We Are Bulletproof Pt. 2” that could have led nicely into “No More Dream.” The “Interlude” is similarly out of place and could’ve been left out too. What is missing with all the rap-heavy tracks, is a good set of vocals to smoothen everything out. Obviously the group’s focus is rapping, but that doesn’t mean that there’s no room for a voice that can elevate something like “I Like It.” Their pre-debut tracks have shown that Jin, Ji-min, or Jung-kook might be capable of having that role.

After all the teasers and anticipation for the group since the end of last year, the single is a bit of a letdown, mainly because it doesn’t showcase what the boys are capable of. It focuses on rap, and after a few listens, one is led to think that there are only three to four prominent members in their midst. Lindsay has described their MV in a similar manner and I agree that the boys don’t bring anything particularly new to the table. Further to that, this debut album — with its strong title track accompanied with excellent rapping skills — shows that BTS could be enroute to unveiling something fantastic following this effort (hopefully).

The Bulletproof Boy Scouts have debuted — what is your verdict? How did you feel about the group’s debut single? Leave a comment with your thoughts!