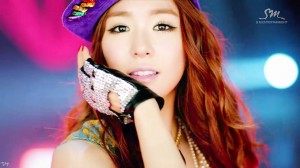 Pitching is hard. To throw a baseball while standing on a manmade mole hill into a catcher’s glove awaiting some 60 feet away, and to be expected to get it there with utmost accuracy, speed, and movement to offset a hitter’s timing is not easy to say the least. Having grown up in the US, it’s fair to say that Tiffany of SNSD is at least somewhat familiar with baseball. She’s probably watched a game or two before on a local broadcast or at least walked by it while her high school team was practicing. It’s reasonable to say that she had a working knowledge of what it is like to pitch. But also to be fair, she probably hadn’t held or thrown a baseball for some time before the 6th of May. Without even a practice throw, what happened was probably less of a fluke and more of an inevitability.

Pitching is hard. It really is. Just ask Tiffany’s bandmate, Jessica. Almost a year ago, she did this: 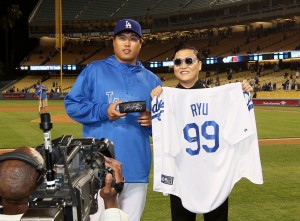 In all seriousness, Tiffany’s presence at Dodger’s Stadium is part of a larger scheme by the management of The Los Angeles Dodgers of Major League Baseball to promote their newly signed and highly touted pitching prospect from the ROK by the name of Ryu Hyun-jin. Part of the promotional package (to attract more of LA’s Korean population to attend Dodgers games?) also included a special appearance by none other than Psy earlier in the season. This form of ethnic-based promotions has myself and others wondering the age-old question – is this racist? Whether or not, the presence of Tiffany still failed to get Dodgers fans into their seats any sooner than the third inning. But it did manage to draw a bunch of screaming K-pop fanatics promptly into the ballpark.

Readers, what are your thoughts on Tiffany’s “release?” Which English-speaking SNSD member gets your vote for worst pitch of all-time?