"Do You Want Some Tea" with Hello Venus? 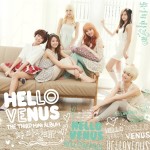 Hello Venus, one of the most promising female rookie groups of 2012, has come back with their spring song “Do You Want Some Tea?” Not only does this MV conform to the spring trend of pastels and romance, it also surpasses the already sugary-sweet image Hello Venus has been marketed with. Although all of their MVs have leaned heavily towards the “cute” concept, this particular one goes above and beyond to fulfill that reputation. Unfortunately, this MV is also less original and fun than the other MVs Hello Venus has released, which is an ill-fated side effect of going so heavily towards the stereotypical “cute” side.

Once again we find a group of girls all hopelessly in love with the same guy doing their best to act cute to get his attention. The only twist in the plot is that the girl isn’t only after the guy’s figurative love but also after his physical affection. Driving around with him in his convertible, feeding him a love potion, having him wipe latte off their lips; we’ve seen these things before. Speaking of potions, entertainment companies need to stop letting their K-pop groups have neon-colored chemistry sets, because they always end up doing something dangerous. B1A4 created a woman out of thin air, D-Unit poisoned a bunch of people, and now Hello Venus is making love potions with questionable effectiveness. 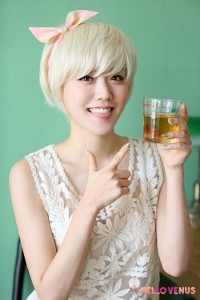 Another common trend in girl groups MVs recently has been the funny little cartoon accents to member’s actions (see SNSD’s new Japanese release “Beep Beep”). In MVs where the overall theme is cartoonish and silly these comic book inspired accents are appropriate, but in this MV they served no purpose. There were only a couple of cartoon additions in the beginning of the MV and then no more for the rest of the video, making the few at the start feel very out-of-place. Other than that slight deviation, the imagery in the MV was consistently bright and simple, which gave it a pleasant aesthetic tone. The whites and spring pastels in the scenery and outfits made everything feel cohesive.

As for style, the outfits for the solo drama shots were suitable for the cute-girl theme and the casual date tone of the MV. Each outfit was tailored to the member wearing it, which helped them fit into the romantic situations naturally. It worked with the story of the MV for the outfits to look like normal clothing any girl could wear on a date, as opposed to being overly theatric or accessory heavy like many K-pop outfits. The dance scene outfits, however, were questionable at best. 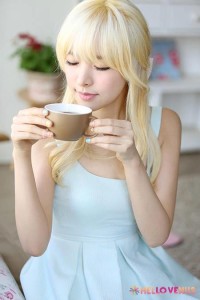 The angular boxes and lines on the mini dresses were reminiscent of go-go dancers from the 1960s which didn’t fit into the MV’s theme of soft colors and romance. Even though the dresses looked like they could have been from a retro theme, they clearly were meant to be cute and spring like, but simply missed the mark. There wasn’t anything remarkable about the dance dresses, they were straight cut for the most part and didn’t have a loose and flowing look like a lot of spring dresses do. The cute bunny ear headbands some of the members were wearing ended up having a more eye-catching effect than the dresses.

Despite the potential Hello Venus has shown since debut, this MV and song feel like a step backwards for them. “Venus” and “What Are You Doing Today?” were both catchier and more interesting than “Do You Want Some Tea?” in both sound and image. Their first two MVs, while still being cute, included a quirky humor which is missing from this release. Overall, this feels like a very generic girl group song, from the typical K-pop love story in the MV to the slow verses and heart-felt chorus. 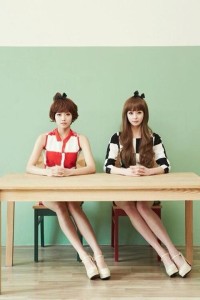 There isn’t anything inherently wrong with the song; it is actually better than a lot of other ones released this spring and the MV is well-made, but that doesn’t stop the final product from being generic to the point of boring. We are used to this cookie-cutter formula in K-pop but it is disappointing that a group that had a lot of potential to come back with something more unique released something as stereotypical as this MV.

The one biggest redeeming factor in this video was the ending. The director could have taken the easy route and had the guy suddenly take the lead and kiss the girl – having her dream come true, in other words – but instead the girl was depicted as the one taking the lead. Although most of the MV portrayed the girl as the usual helpless, unsatisfied, submissive girlfriend, the ending had her making the first move and inviting the guy into her apartment. The girl isn’t characterized as being overly sexy to get the guy, and she doesn’t give up and settle on her kiss-less fate, but rather is portrayed as a normal girl who makes the self-aware choice to get what she wants by inviting her boyfriend to get closer to her. This one little action doesn’t negate the rest of the MV and its female stereotypes, but it does improve the overall message.

Although I was far more impressed with the earlier songs from Hello Venus, “Do You Want Some Tea?” is still a solid release for the season and fans will most likely be satisfied. For their next release I hope they go back to their slightly more fun sounding songs and quirkier MVs. Overall rating 2.5/5