Hello? Hello? Nu'est, Are You There? 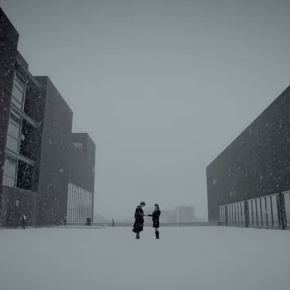 Nu’est, the boy group created by Pledis Entertainment in 2012, has returned with a new single and MV after a six-month hiatus. With Nam Bora (of The Moon Embracing the Sun fame) as their first-ever leading lady, the boys make their comeback in new, romantic territory. Although it’s evidently a different release, the boys have kept to their signature monochrome for the video. Coupled with well-thought-out choreography, Nu’est delivers more striking moves in this new one.

The MV plot takes a rather interesting angle; we see a girl five-timing the guys in the group. Surely a common conundrum in a sub-sphere of K-pop enjoyment — “why can’t there be more than one female lead?” — this is finally tackled by Nu’est in Hello. Where the guys in most romantic MVs seem to have separate story lines, we are often led to assume that 1) they never interact in the course of the plot, or 2) the girl in question is super sneaky. In this vein, it’s interesting to see an MV do the exact opposite and emphasize the interaction between the MV’s obvious leads. The lyrics of the song express how a man finds out about his cheating girlfriend, and how he deludes himself into thinking nothing of it, to save the relationship; he ends up lying to himself and to his girlfriend.

Externalizing my thoughts a little, I’ll have to say that the multiple dialogues here have been quite confusing. So: if the guy gives in, why is she so distraught? If the guy is trying to forgive and forget, why does she seem to want to ruin everything? Her motives are confusing and unfortunately, the lyrics only express the male’s point of view. While difficult to understand, I wasn’t left confused for too long. The sequences at the end, which seem to mesh together the multi-layered plot, present quite a perfect visualisation of the situation. And on the topic of scenes, they were quite succinct in expressing the workings of cheating in a relationship — contact between partners is varied, and different physical proximities are kept, etc. These representations have displayed how different people react in the face of unfaithfulness. With the girl in the MV as a nucleus to the situation, we’ve been able to see how the various relationships are manipulated, and finally how these plots are weaved with the music. 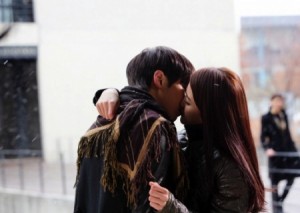 In terms of choreography, Nu’est delivers it on point and as expected. For instance, in the table and chair scene, the back-up dancers come in for a move that is a perfect accent to the change in song tempo; by drawing the furniture apart, this demonstrates the imagery of a guy seeing his love being ripped away by other men. The quick and seamless transition to Baekho‘s scene with the quick-step choreography also matches the beat of the song. If we go on to consider the kiss scene to be part of the choreographed action, I’d have to say that it’s impressive. For such a young group, the intimacy looks real and far less awkward than one would’ve expected. This may be hard for some fans to take, but it’s certainly upped the MV’s realism.

A stand-out portion of the choreography consists of the guys and their ties. Plenty of groups in K-pop have incorporated coats and collars into their dance sequences, but when done to a T, that’s something to behold. Using their wardrobe picks as props, supporting the lyrics, is an uncommon technique that gives an extra dimension to the choreography. In this case, when the guys are choked by their ties, this scene leaves the biggest impression by expressing the proper distress in discovering a cheating girlfriend. 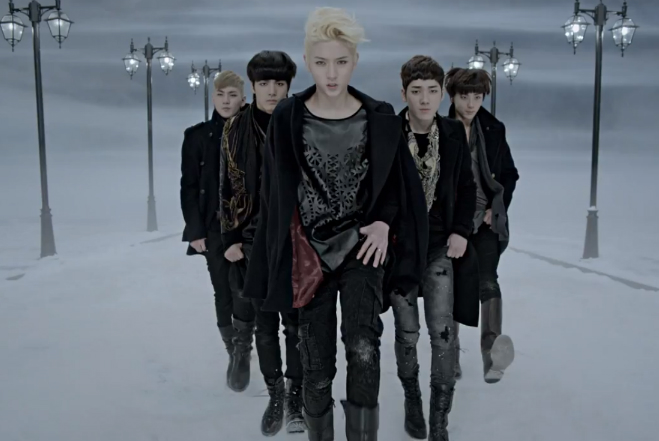 The styling is monochromatic and winter-centered, which makes sense considering the setting and the unhappy emotions in the song. There are a lot of scarves and heavy coats, all in muted tones that give the members of Nu’est a fashionable and mature look. One stylistic choice, which speaks to an idol trend, is having Ren wear contact. Interestingly, they appear gold — in his solo shots — like the ones worn by Siwon in “Break Down”, and grey — in the squabble scene with the girlfriend. Ren’s cape was also a stylistic point; the open collar works well with his up-do, and the slight femininity of the cape compliments his effeminate features.

The setting for the MV is perfect for the story line and lyrics of the song. A winter landscape suits a story of emotional pain better than that of any other season, and the pattering snow alludes to a suitably soft and melancholy feel. The snow-covered space and street lamps is both dynamic and simple, making it ideal for showing off the boys’ choreography. The real world settings are also simple but accurate, allowing viewers to mentally assimilate a situation of emotional turmoil. 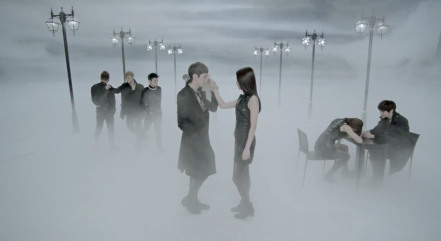 In conclusion, this isn’t a new concept to K-pop, or even the larger music industry. There has been and always will be songs about infidelity and emotional repercussions, based on the fact that break-ups and the like are enduring and overwhelming experiences for many people. Despite that, Nu’est took the concept and made it their own. With their own style of dance coupled with eye-catching wardrobe choices, the boys have created a refreshing dynamic with their female lead, giving this classic story line some extra flavor. On a sadder closing note, Aron’s recent injury has momentarily put him out of the group’s live performance rounds, making this comeback less of what it might have been. Nevertheless, time will reveal Nu’est’s and Hello‘s places in the K-pop realm. 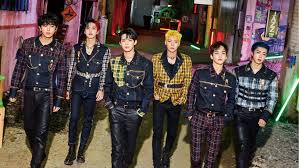