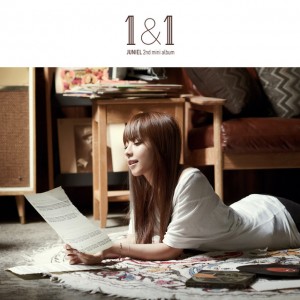 As much as I feel that rookies are doing way too many promotions in a year, there could be a case made for some rookies to give us a second mini-album within a few months of their debuts. We have seen it Ailee, who happily gave us a more pop-friendly sound, with BAP, who have endlessly pushed the same image with some cute thrown in, and with Spica who relentlessly push toward the mainstream.

And now the latest in the line of “rookies giving us second shots” is FNC Music’s Juniel. While her first album made for pleasant listening, there were a fair few instances where the album had shades of IU’s recent, more pop-friendly sound. For  her second release “1 + 1”, there are hopes for a more differentiated sound, as well as her being able to show some of her own compositions.

Right away from the first single, there is evidence of some change. Where “Illa Illa” had a slightly dreamy feel, “Bad Man” goes for a more broody feel, as per the topic. There is the usual gentle guitar strumming, which soon is supplemented by a more strident drumming that soon becomes part of the song till the end. Top it with Juniel’s delicate vocals, and the song thankfully does not overdo the morose elements.

If anything, it is Juniel’s overly light vocals that deny the song the punch its hard-hitting lyrics (How can it hurt so much,as if I’ve caught a nasty cold/You are so mean, you are so bad/Was my innocent love that fun to you?). Where there should be a hint of cynicism/jadedness/sadness, what we get is rather polished singing which takes a bit of the emotional edge away.

Still, as a listen for those days when one needs music that is slightly detached, it makes a good choice.

The second track, “Oh! Happy Day” is more of a return to the formula that made Juniel very known. Stream-of-conscious lyrics that describe a pleasant morning, together with some comfortably simple but uplifting strumming, and you get a basic but eminently listenable tune. Props also have to be given for how this song just gets the simple things right and impresses without trying too hard.

The next song, “Boy” largely follows in the same vein as the previous track, save for a largely jauntier sound. While the song is generally pleasant, there is not too much else interesting about it, and parts of it do scream “generic drama OST”.

For me one of the album’s highlights would be “Cat Day”. A slow, lazy introspective track about an inactive feline, this song has very nice hints of K-indie music, and despite Juniel singing in a more down-beat style than usual, she pulls it off nicely.

As far as titles go, “Happy Ending” as the last track has got to be as apt as titles get. With a cheery tone and light high-pitched singing, and some light taps from a triangle, this is the most positive-sounding song in the album. However, if there was one problem, it is how this song does not seem like the best of fits in the album, seemingly out of place with the other more mellow compositions.

Overall, I found this album a pretty mixed bag in terms of what it set out to achieve. As a pleasant listen that is a nice alternative to the electro-pop of girl groups, it works. I also liked how Juniel tried to experiment with her vocal range and her attempts at composition, both of which come off nicely. On the other hand, the lead single is denied a bit of punch by the overly gentle vocals, and there are hints of slightly weaker/oddly placed singles, suggesting that this album was a slightly rushed affair.

While the album made for nice listening, as a whole it was slightly lesser than the sum of its parts, so my rating for it is 3.5/5 overall.