The Good And The Bad of One Day's Reunion 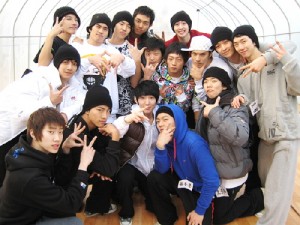 It’s not often the boys of 2PM and 2AM come together to work some much appreciated music magic. The combined groups, who together take the title One Day, have since their debut managed to successfully avoid making music with each other. Which is a shame because the groups have great, if underdeveloped, chemistry–much of which is reserved for special stages and not official releases. Fans got to watch a portion of both groups’ trainee days during Mnet’s bootcamp heavy Hot Blood, where members interacted with each other long before they were siphoned off into their respective groups. But since then, One Day hasn’t done much together.

So it’s a delight that they’ve come out with a new Japanese PV that gathers all 10 members onscreen together for the first time in years. The song, appropriately titled “One Day,” is the official track to their documentary Beyond the Oneday: Story of 2PM & 2AM, which will be released in Japan at the end of June.

So how great is this song and MV? Well, in one word: Meh.

The reunion of 2PM and 2AM is, put politely, a letdown. But before going into the bad, let’s look at some of the good, shall we?

Although the song is ridiculously forgettable, it has a really memorable (although corny) hook. 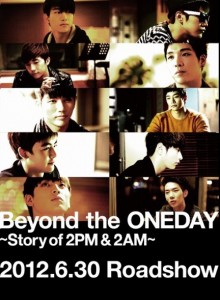 It’s kind of inspiring, which is fitting since the track will go hand in hand with their upcoming documentary. I can totally see this song playing during a tear-inducing and heavy-handed montage of the groups’ ups and downs.

I also think the line distribution is fair. All 10 members get sufficient lines without feeling too rushed or that the song needs to be overbearingly extended to accomodate all the singers. And the lines play to each person’s strength: Junsu gets the ad-libs, Changmin hits the power vocals, Taecyeon delivers a couple bars of rap, and Nichkhun–well he looks really cute.

Haven’t I seen this concept before? The dapper black suits, the washed out cinematography, scenes switching from room to room? Oh yeah! That was the low-key but far superior Japanese MV “I’m Your Man” from the album Republic of 2PM. 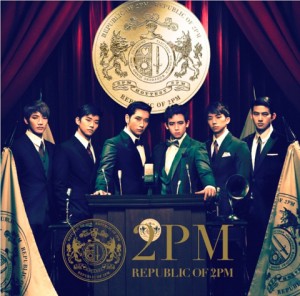 I guess the guy who came up with the concept to put 2PM in suits for the entirety of the last year decided the idea is still fresh! So why not make it the concept of One Day’s new MV! For the record, guy who came up with that concept, it’s not new. Many others have done that one already including, I don’t know, the Beatles! Please come up with something else, One Day, because you’re boring everyone to tears.

On top of the concept, the filming of the choreography is amateurish and really exposes how not in sync the group’s dancing is. When there’s a group of that size, you can’t set them up in a long line and have them dance because it’s easier for the eye to catch mistakes in choreography. However, when you set them up in a ‘V’ formation (much like how Super Junior and SNSD do it), the moments that are not in sync can be better hidden. A good portion of One Day’s choreography is filmed while they’re in a straight line and it does nothing to hide how not in-tune they are with each other. 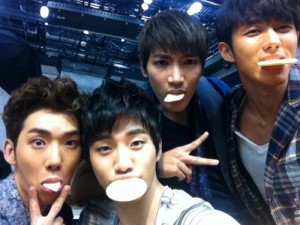 But the worst part of this MV is the incredibly awkward interaction among the members. It’s like something I’d expect from a terrible Disney movie. The guys keep hugging each other with these disingenuous bouts of laughter as if to say, “Look! We’re really brothers! And we love each other so much! And you can tell because we’ve got our arms around each other!” It all seems so fabricated. And this feeling of their relationships feeling fabricated has never been an issue in the past. They’ve all frequently guested on variety shows together where they actually do appear as if they’ve known each other for years and look very comfortable with each other. So it’s a shame that something that comes so natural to them appears so laughably unnatural in this MV.

Overall, this One Day reunion is nothing to be excited about. But when it’s all said and done, the song is going to be used as a promotional tool for their documentary so I guess it’s not supposed to be exciting. However, I’m hoping that 2PM and 2AM collaborations will be more satisfying in the future. Because frankly, I’d rather watch them resurrect their Dirty Eyed Girls collaboration than a single that lacks very little spirit.