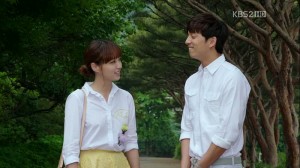 What did Kpop have in store for us this past week? Shorry J outs Sangchu’s messy room prompting a quick clean up, 2AM and 2PM reunite for “One Day,” YG Entertainment announced that they were donating a portion of the proceeds form Big Bang‘s ALIVE World Concert Tour to UNICEF, Younha released “Would We Have Changed” featuring John Park, Kim Hyun-joong turns up the “Heat” in Japan, Boyfriend comes back with “Love Style”  which apparently includes floral print, Ulala Session released “Goodbye Day” for the Bridal Mask OST, 4K debut with a “Rocking Girl,” Jun.K (2PM’s Junsu) released “Love… Hello” for the I Love Lee Tae-ri OST, and after a month off due to the MBC strike–the return of We Got Married.

On the K-drama front Big, got a whole lot better last week with more of the story unfolding and the adding of layers to each of the characters.  Ratings also increased although I’m not sure if that was due to the better episodes or the arrival of miss A‘s Suzy as the lovably quirky stalker girl Jang Mari and some outstanding acting from both Lee Min-jung and Gong Yoo.  Whatever the case, I’m glad to see the story blossom into the type of drama that I know, love, and expect of the Hong Sisters.

As usual, if you’re not up-to-date on your K-poP turn back now– because spoilers will most definitely ensue.

Standing Egg is one of the first K-indie bands that I ever heard of and until this day, remain one of my faves.  They just released their brand new single “Keep Going” and its creatively cute and awesome MV.

Korea’s Top Band Season 2 continues in its elimination rounds as the judges try to find the show’s ‘Top’ candidates for the crown.  Was impressed with Transfixion, rockers with a little grunge thrown in (there’s a strong Nirvana influence in this performance) and a charismatic lead singer who’s half Marilyn Manson, half Joker.  They had a strong performance and were in second place until these guys came along and rocked their way into first place.

3. The King of the Balls

Hmm, there’s just something about that that doesn’t sound right.  It’s the third episode of Shinhwa vs. SHINee on Shinhwa Broadcast.  This ping pong game between the two idol groups is hilarious with Onew and Andy having some legit skills, but not sure if that’s necessarily something to brag about… I already had this down as a thing, but Gil told me that I HAD to include this in 5 Things and, “Seems like the work of The Lonely Island crew has reached the shores of Korea, or more specifically the writers of Shinhwa Broadcast. In this week’s game with SHINee, both groups test their lower body strength by popping out as many balls from a box strapped around their mid-section using the medium of dance. “D!@# in a Box,” anyone? Judging by Eric‘s moves, it seems like he could join Andy Sandberg and Justin Timberlake in their raunchy debauchery.”  Uh, she lost me at “Lonely Island Crew.”

A Gentleman’s Dignity is proving to be such an unexpected delight to watch.  There’s still a bit of overacting by the leads Kim Han-eul and Jang Dong-gun, but I get it–they’re trudging through the embarrassments of attraction, crushes, and that awkward stage at the beginning of all relationships.  With great dialogue and a snappy storyline the drama is a fun watch, but it is really its exploration of friendship that lies at its heart.  These snapshots back into the past of the F44 are ridiculously funny and adorable at the same time.  And I’m thinking we just got introduced to Colin/K-drama-watching-on-the-plane-boy/delinquent hitchhiker‘s mom (aka C.N. Blue‘s Jong-hyun). 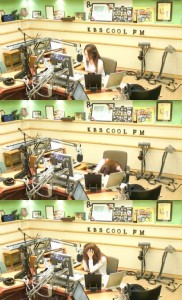 Everyone’s been wondering what has been going on since Ji-Hyun-woo‘s public love confession to Yoo In-na at the finale press conference of their drama Queen In-hyun’s Man. Yoo In-na made up her mind about the relationship and announced on her radio talk show KBS Cool FM Turn Up the Volume that she is in a relationship with Ji Hyun-woo. It looks as if they both did have feelings for each other, but due to work commitments and the effect that public dating has on the lives and work of Korean entertainers, the decision was a difficult one for Yoo In-na. The day before this announcement, pics of the couple were leaked through  Sports Seoul. 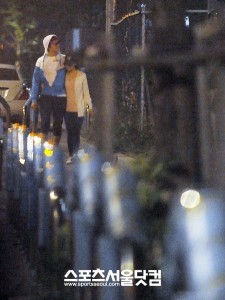 What was also an issue for Yoo In-na was that it was rumored that she was to be one of the new couples on We Got Married and that several episodes worth of material was shot, but then the show went on hiatus due to the strike.  Recent news broke out that Yoo In-na’s  virtual husband-to-be was actor Hyun Woo (Tree with Deep Roots), but now with her public confession of dating it would seem that the show will not be able to use that footage.  Ah, the things we do for love–I wonder what kind of repercussions Yoo In-na will face because of this?

Loved this couple in the drama and hopefully in real life they will be able to have a great relationship also.  Maybe with Ji Hyun-woo heading off to the military they’ll be able to have some time out of the spotlight together, but the separation has also broken other couples up.

I wonder if Yoo In-na had a dating ban like 2NE1?  What must Papa YG think? In any case, congratulations to Ji-hyun-woo and Yoo In-na!