If a British actress was ever to come over to Korea and spend some quality time with a certain Korean idol, my money would have been on Emma Watson and Taemin. However, even though SHINee’s maknae admitted to her via camera “I love you,” Taemin was pipped to the post by actor Kim Soo-hyun and actress Kaya Scodelario. 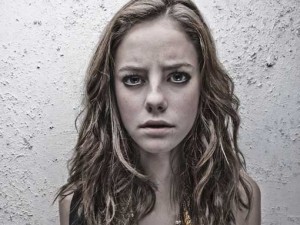 Kaya rose to fame in Bafta-winning teen drama Skins. The show often came under fire due to its portrayal of teenage alcohol and drug abuse, sexuality, mental disorders and a whole host of situations critics called “stereotypical” and “unrealistic”. Despite this it has become a staple British drama, and Kaya’s Effy was one of the longest-standing and best-loved characters. She has also acted in 2010’s remake of Clash of the Titans and Wuthering Heights. A regular in magazines such as Dazed and Confused, Elle UK and Vogue, her classically elegant half-English half-Brazilian looks match the style of J.Estina’s fashion well.

Most of us will know Kim Soo-hyun for Dream High and the Moon That Embraces the Sun as King Joseon Lee Hwon. He has also released several OSTs including the chart-topping “Only You.” Not only does he too have just the right look for the shoot, he also has revealed that his perfect type is, yep you guessed it, the lovely Kaya Scodelario. The more cynical might say that this declaration of love was simply a clever tactical more to get Kaya some quick exposure before the photoshoot. After all, the previous J.Estina models were SNSD, pretty big shoes to fill. On the other hand, Skins has enjoyed international popularity and it’s hardly like she isn’t ‘effing gorgeous.

The photo’s themselves are hardly original, simply shots of the two look classy, refined and a general look of two cats that got the canary. While a full photoshoot has yet to be released the main picture sees Hyun Soo in a sharply cut pale grey blazer with cream silk lapels and a white shirt. Kaya wears a feminine floral blouse and pearl-drop earrings. Kaya has also been seen to carry a small blue Norita bag from J.Estina. A behind-the scenes video shows a variety of other outfits from trench coats to a wedding ensemble.

This video is actually pretty cute, although Kaya’s Korean pronouciation smacks of several hours of careful learning. She seems a little uncomfortable calling him “Oppa” but it’s worth considering that there isn’t really an English equivalent and the meaning of the word can seem strange if you are unaware of Korean culture. She does seem genuinely delighted at the greeting she received in Korea and has expressed her newfound love of the country on Twitter. In fact, pictures of her leaving the airport from Korea show her wearing a pair of Beats by Dr Dre headphones, and we know how crucial they are to K-pop. Soo-hyun appears similarly smitten and when she pecks him on the cheek he actually bounces in excitement. 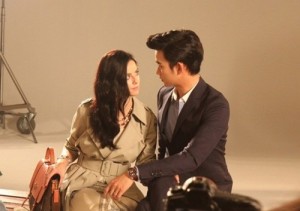 There’s something ironic about the fact that Korea’s new foreign fashion crush is from a show even the West has to admit pushes the boundaries sometimes; for instance, a remake was banned in South America for over-sexualisation. Kaya herself has been named one of the baddest girls on British TV and it is quite the contrast to Soo-hyun’s squeaky clean image, although he has been linked to miss A’s Suzy and T-ARA’s Eunjung. His ballad contribution to his shows is pretty different to the “Skins” soundtrack, which is basically club-music and the sound of people vomiting or being shoved into lockers.

It’s a great way for two fairly sizable fanbases to collide and hopefully it will result in more, similar collaborations. Soo-hyun’s popularity has risen sharply after The Moon That Embraces the Sun and Kaya’s move into film has already gained her new interest. On their website J.Estina has named Kaya a new “muse which hints at further collaboration work.” Netizens are already clamouring for her to be paired up with Key or Taemin.

Could this be a new way of getting K-pop, or at least Korean pop culture, over to the West? Foreign models have always been welcome, and a good grasp on English isn’t as essential as when you are promoting an album.  The feedback from this photoshoot has been almost entirely positive and I’m pretty sure plenty of Western, or at least British brands would welcome the fans a K-pop model would bring in. In the meantime, I’ll just sit back and pray that Soo-hyun really does let Kaya take him around London, taking lots of pictures of course – they are just too damn photogenic not to.