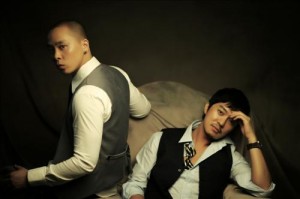 Sometimes, K-pop gets a tad overbearing and we just need an escape from the awesome but chaotic world of K-pop. As for myself, I love to listen to R&B music especially if I need to get work done or if I just want to relax. But what exactly is R&B?

R&B stands for Rhythm and Blues, and is a soul and funk version of pop. I personally like R&B because it’s soothing to my ears, and there seems to be more genuineness in the emotions portrayed in these songs that you sometimes do not get to hear in a pop song. Over time there has been less R&B songs and more bubblegum K-pop, but that’s just how the market goes. Here is my playlist of R&B songs that I would love to share with you all. I’m just going to highlight a few of the songs on my playlist, but definitely check out the other songs too.

Young-jin’s element is clearly R&B, and if you look at all the SM artists’ R&B songs, then it is most likely that Yoo Young-jin was the one that produced it. All of his R&B material is eargasmic, and have yet to fail to impress me. When Yoo Young-jin released his remake of “Sorry Sorry,” I was surprised that I was liking “Answer” more than the original, which by the way is a great song. Super Junior sang their own version of “Sorry Sorry Answer,” but even the vocal powerhouses of Super Junior could not touch Yoo Young-jin, which makes sense considering Yoo Young-jin is a veteran singer who debuted in 1995. Even though I know this will not likely happen at all, but I would not mind at all if Yoo Young-jin came out with a remake album of all the R&B songs that he has produced over the years.

This is the original Brown Eyed group, the legendary group, Brown Eyes. “It’s Been One Year” was their debut and most famous song. When I was brainstorming which songs to put into this playlist, I felt almost obligated to share this song because of the high caliber of this classic song that during its time, everybody loved. I am not kidding —  when it came out in 2001, everyone was playing this song.

Many of you might see Big Bang as this dance/electronica boy band, but originally Big Bang was more of a hip hop and R&B group. I actually miss this image that Big Bang used to have. I mean I still like the new material that they are churning out, but I can’t help but feel sad that they’re not busting out their old school type of songs. On another note, those that complain about Taeyang with his faux hawk should be quiet. I think his faux hawk is his signature look, and I would rather have him keep his look then have the hair style that he debuted with. Watch the video and you will see what I am talking about.

This group was my first love. No one can ever take the place that SES has in my heart; even though I didn’t follow them until their 4th album, A Letter from Greenland, which coincidentally is where this song came from. I’ve been listening to K-pop for more than a decade,but SES was the first K-pop group to get me into the world of K-pop. I chose this song because during this time SES went through an image change from cute girls to grown women. “Show Me Your Love” displayed their growth as artists, and all of the members held and owned their parts. If you have the time, you should listen to their whole album.

I might get some hate from this, but this is the best song that SHINee has. Everything just worked (sans the troll rapping), and these were the days that SHInee actually wore comfortable clothes and not extremely tight pastel pants . I remember this was a constant on my playlist when I went to Korea for the first time in 2008, and to this day is still on my top 25 most played list. It’s safe to say that SHINee has changed from their debut, and they have some great songs, but none of those songs in my opinion can touch “Replay.”

Another iconic song from g.o.d.; it makes sense why they were so popular. A lot of their songs had themes that were something other than the typical love, party, and self-loving topics. I’m not saying the typical topics like love is a bad thing to sing about, but it is a refreshing break to hear a song talk about something other than love every once a while. This song in particular talks about how unsure life is and the road to achieve our dreams. This song meant a lot to me when I was applying for college and picking out my career; in fact this song still means a lot to me now that I am applying for jobs and ultimately choosing my career path. I hope you guys get as much inspiration from this song as I did.