Idols Take Flight to the City of Light

Some of K-pop’s top groups made a mass exodus this week as they all headed to France to perform for “Music Bank in Paris.”  There is no better way to celebrate this event, which takes place in one of the fashion capitals of the world, than by dissecting the numerous examples of airport fashion exhibited by the idols.  Groups taking part in this show were Beast, 4Minute, Girls’ Generation, SHINee, U-Kiss, 2PM, T-ara and Sistar; as expected there were some great ensembles as well as some real bombs.  Let’s take a look! 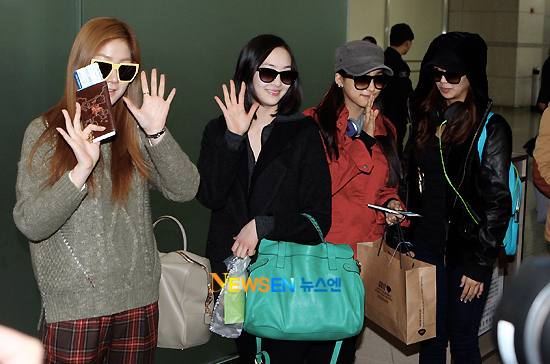 The girls of Sistar looked comfortable and casual for the long international flight.  In fact, they looked downright normal!  If it wasn’t for their giant dark shades indoors and the fancy designer handbags they carried, people may not even have realized they were famous.  SHINee was down a member, as leader Onew stayed in Korea due to an ankle injury.  The remaining four members showed a variety of styles among them.  Minho looks as if he just came from a magazine shoot, sporting a dapper wool coat and scarf with aviators.  Taemin wore one of this winter’s hottest trends, a long army green jacket with a fur-trimmed hood, while Jonghyun wore a shirt that featured a glittery Playboy bunny logo which is generally a tacky fashion choice.  Key was once again showing of his unique fashion sense, and for once, this look really works for him.  It is offbeat without appearing forced; one can easily imagine him walking the streets of Paris in his tweed jacket and bow tie. 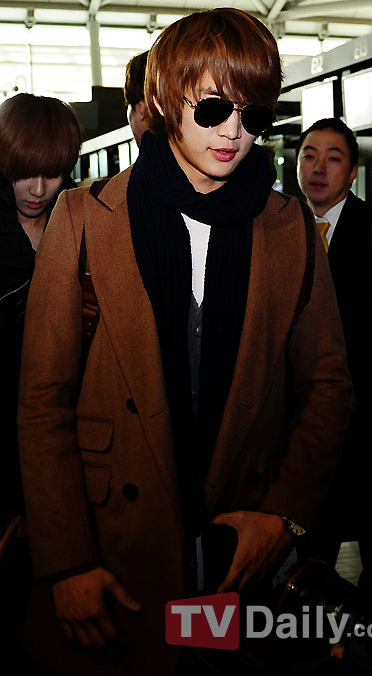 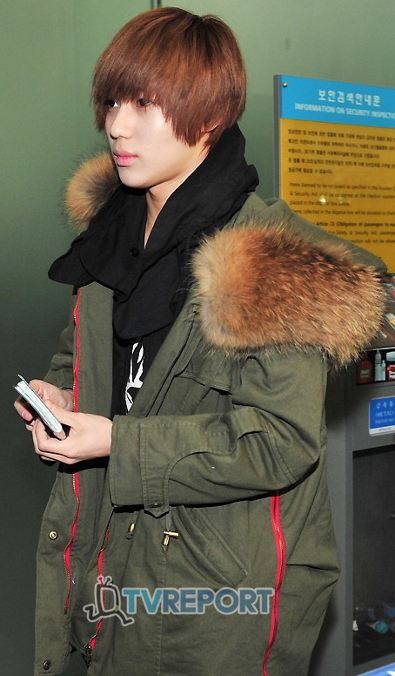 It seems as if SNSD had just returned home from the US, and now they are on the road again.  From all their recent travel, it seems some members are digging into the depths of their closets for never-before-seen fashions that probably should have stayed buried.  Even though Jessica is rocking an awesome Jimmy Choo handbag, nothing can make up for the monstrosity that is her roadkill jacket.  There is long hair, short and even curly patches; she’s normally a favorite on the runway but this look just does not fly.  Sooyoung looks a little bit country, but a little bit classy thanks to her Chanel bag, she looks casual but put together at the same time.  Hyoyeon has another miss; her sweater is too busy for the floral print dress she paired it with.  Seohyun sported a sophisticated look with her long plaid skirt and chocolate-brown wool coat.  It is easy to forget that she is the maknae! 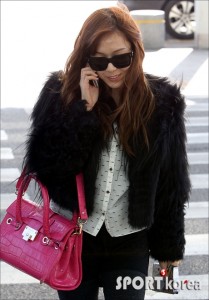 Boy group Beast had members that ranged from very stylish to very strange, and everything in between.  On the good end of the spectrum were Ki-kwang and Jun-hyung, both of whom wore simple blazers and expensive Balmain jeans.  The only thing really off is that Jun-hyung looks like he may have borrowed his girlfriend Goo Hara’s shoes!  Unfortunately on the bad end of the spectrum were the leader Doo-joon and Trouble Maker Hyun-seung.  At first glance, Hyun-seung appears as if he should be on the “Good” list, and then you see that his shirt is furry and everything makes sense.  Doo-joon on the other hand is exactly where he belongs.  Polka dot pants?…check!  Leopard print hat?…check!  Top of the worst dressed list?…CHECK!

Joining their Cube labelmates were the ladies of 4Minute. Leader Ji-hyun wore a bright and gaudy printed blouse and Hyuna once again went with her trademark “bottomless fashion.” While the look is stylish, she should wear embellished jeans or leggings more often for a little change of pace.  The ladies collectively known as Double Yoon, Ga-yoon and Ji-yoon, looked fabulous.  Their simple, chic styles would fit right in with Paris street fashion.  They should take a stroll with Key!  The youngest member of the group, So-hyun, had a cute pink sweater and a tote emblazoned with Parisian imagery; it is a very age appropriate style for the singer. 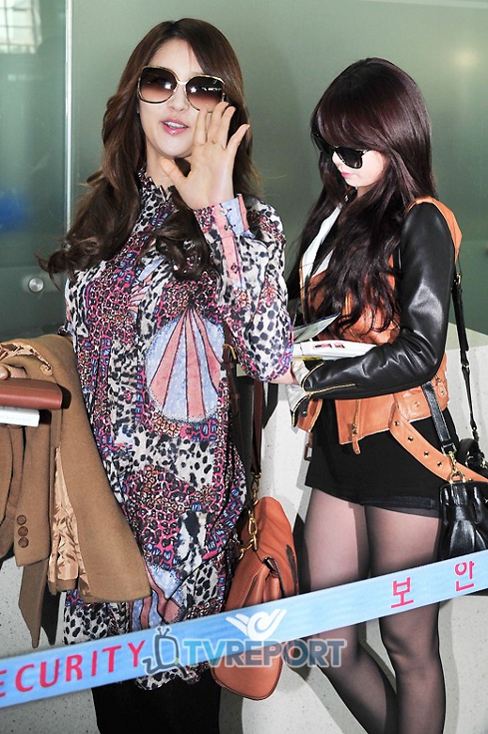 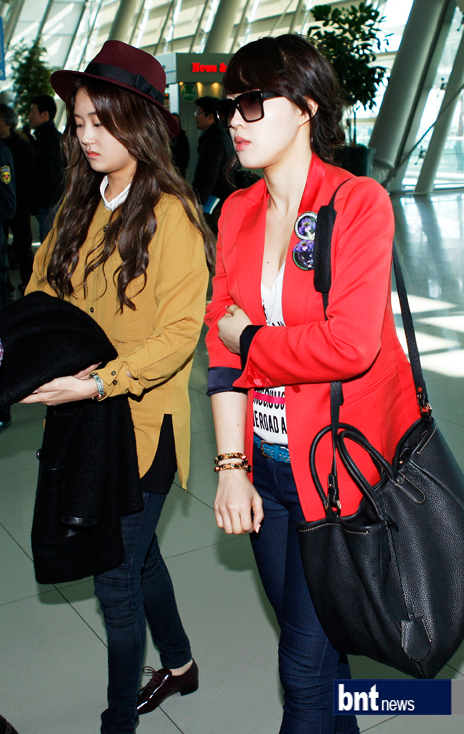 Finally, T-ara also made the trek to France and some members were definitely more interested in comfort over style. Soyeon and Boram both snuggled in to giant sweaters and Hwayoung bundled up in a long, padded coat.  Boram was practically lost in all of the fabric!  Qri looked kind of silly in comparison, wearing the shortest of leopard print shorts with a fur vest.  Eunjung looked great, although on crutches most of the time, in a stylish biker jacket with fur collar.  Hyomin by far had the most talked about fashion choice of the day.  The singer was spotted in a jacket being described as “naughty hands” that had a pair of stuffed hands resting casually on her chest.  A piece like this would normally cause many a “WTF,” but there is something about the confidence with which Hyomin wears that jacket that makes it a winner. 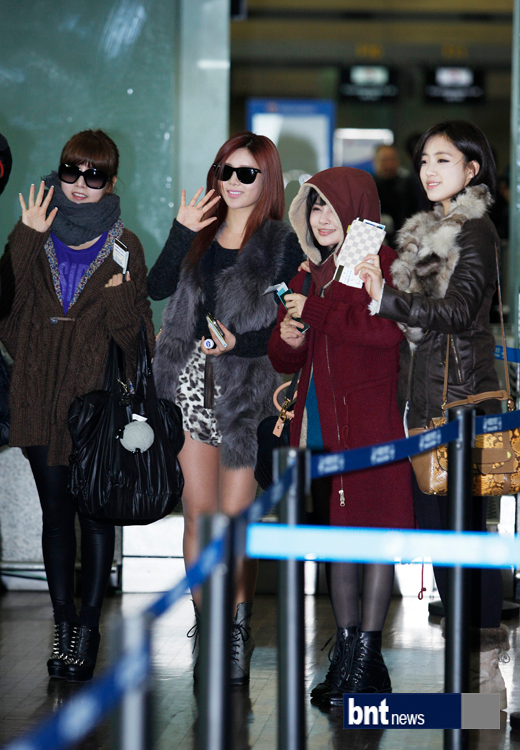 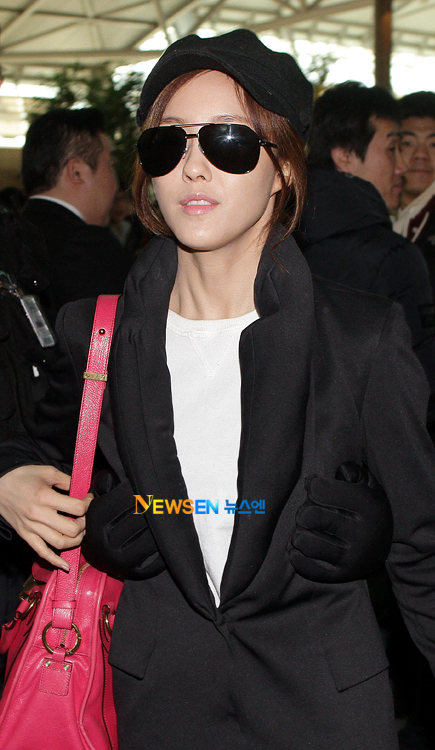 Who do you think had the best airport fashion this time around?  Would you wear Hyomin’s cheeky jacket?