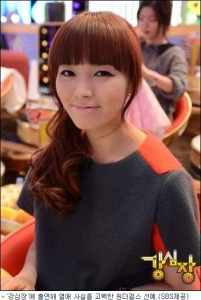 In the ever-growing narrative of Korean idols dating, Wonder Girls’ Sunye has contributed to the ongoing trend of idols being frank about their relationships.  This trend gained momentum when SHINee’s Jonghyun and actress Shin Se Kyung were essentially caught dating and had no choice to admit it. Beast’s Jonghyun and Kara’s Goo Hara and a sea of other couples followed suit. And now, Sunye joins their ranks.

Sunye is a fan favorite across a variety of boards. She is loved by idols, by Wonderfuls, and as proven by our Miss Seoulbeats pageant, by Seoulbeaters as well. And this is not with reason. This girl seems to have a lot going for her but of all these things, it seems like her warm, honest heart and soul is the cherry on this cake.

She admitted to the relationship because she felt that it was her responsibility. It may not be any of our business but she was honest with the public and honest to her relationship by admitting to it. This isn’t something to pat her on the back for as an idol, but as a person.  Being famous definitely places irregular pressures on idols but it’s nice to know that some idols don’t let these pressures get them and stand by their own principles.