SM Entertainment likes marketing flower boys. With DBSK split, and Super Junior steadily passing the age where it’s acceptable for them to be done up in bright skinny pants and polka dots, SHINee has become the victim of choice for those pastel loving stylists. In fact, it’s become something of a trademark for them; ask the average person to pick one word to describe SHINee, and that word is probably going to be “cute.” Sure, SHINee might have the occasional break from the cute concept. “Lucifer” and “Ring Ding Dong” were brief, though half-hearted reprieves. But even now, with all of the members being of legal age, it seems that there will be no permanent break from the noona-baiting style that made them famous.

News recently broke that SHINee will be joining 2NE1’s Dara as the promotional faces of Etude House. And no, not as classy suit-wearing, BB cream sporting city men. As prepubescent, inoffensive little angels. This might have been acceptable back when Taemin was in junior high and the rest couldn’t legally smoke. But now that they’re old enough to be barhopping, foulmouthed college kids? It’s a bit of a problem. Once upon a time, cute came naturally to them, but now it’s coming off as forced. One can only milk the doe-eyed stare for so long. Little maknae Taemin has even expressed occasionally in interviews that he wants to be taken seriously, as a manly man rather than a little boy who looks like a woman. 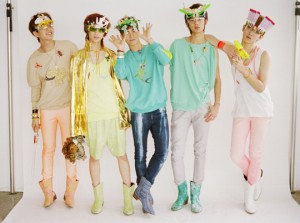 Now, there’s nothing wrong with being a beautiful boy. In fact, I quite love beautiful boys. I just can’t help but take pity on these boys being forced into those cutesy shoes, though, rather as I take pity on the lovely ladies of SNSD being told to act like dimwitted schoolgirls. It rings hollow, and it’s quite clear that they’re chafing under the restraints of their image. Jonghyun, in particular, has always been something of a misfit. That boy was meant for leather pants and electric guitars, not pastel skinnies and aegyo. He stuck out like a sore thumb in their earlier promotions, and sticks out even more now. Minho as well, isn’t suiting the look so well either. He belongs in suits, or classic, preppy sportswear. Key and Onew do a tolerable job of bearing up under outfits that belong in the children’s section of a department store, but both would be infinitely more attractive if given a different wardrobe.

SHINee isn’t given these cutesy looks for no reason, though. They’re tailor-made to appeal to a specific crowd. Namely, the noona crowd. Speaking as someone who thought “Replay” was SHINee’s best song, like, ever, I find the whole concept of gunning for an audience old enough to be their aunties slightly creepy. Now, this isn’t an uncommon phenomenon in the K-pop world. In fact, there’s a sizable segment of boy groups that play baby to reel in the older ladies. But that, in itself, is entirely the problem. Since when was it unacceptable for girl groups to play lolita bait, but perfectly okay for boy groups to do the same? Theoratically speaking, there should be no difference. But the same fans who cringe at the very idea of Orange Caramel are cheering for SHINee dolling up in an attempt to grab fans twice their age. Isn’t that just a little hypocritical, and unfair to SHINee, who are expected to play nice for the pedophiles while girl groups are allowed to be outraged at the very idea? They deserve better. They deserve to be able to appeal to a diverse audience, both outside and inside their age range, not only one far outside of it.

And then, there’s the added problem that they’re not even in the jailbait age range any more. Like it or not, they’re all young men now, young men who probably shouldn’t be acting a decade younger than their age. They’re hitting the age when groups like DBSK were busting out the suits and ties. And yet, you’d be hard pressed to find a performance where SHINee was allowed to wear something simple and attractive like that. They’ve either got ridiculous  neon and leather monstrosities akin to what they were slapped in for the “Lucifer” promotions, or the pastel jeans, bow ties, and pretty make up that was part of…well, just about every other concept. It’s got to be humiliating for a young man in his twenties to be forced to wear something that his ten year old cousin is probably rocking. And yet, that’s the image that they’re still stuck with, as evidenced by the Etude House news.

I can only cross my fingers that in another year or two, some wise stylist or marketing agent  puts their foot down and gives SHINee nice, age-appropriate things to wear. Until then, I can only sigh and feel pity every time the boys are trotted out in clothes that ill suit them. Do you think that the cutesy look is still appropriate for SHINee? What kind of image would you prefer to see them sport?