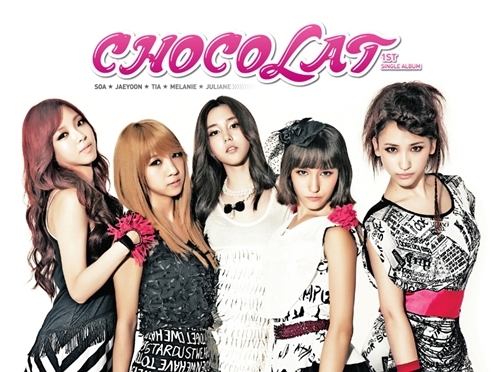 When news of Kpop’s newest girl group Chocolat was announced, I was skeptical.  This past year has been the year of girl groups with debut after debut of mediocre singers relying more on their looks, flashy dance skills, crazy amounts of auto-tune, and Engrish than actual singing talent.  I expected Chocolat to be no different.  The group is marketed as Kpop’s first bi-racial idols with three Korean-American girls which for me translated into one word: LOOKS.  But I was willing to give them a try.

Chocolat debuted with “Syndrome” a song following the trend of Bubblegum pop which seems to pervade the Kpop scene today.  So after watching the MV, their debut stages on the weekend shows, and two MR removed versions, here’s my opinion on this new sensation.

I was pleasantly surprised at how much I enjoyed the video.  The song was mediocre at best, none of the girls blew me away with their talent, the MV itself had no storyline and featured mostly the girls dancing, and the color scheme featured LOTS of pink which I’m not a fan of.  Yet it was the first MV of the new bunch of girl groups that I actually watched the whole way through.  However, the cute ending was not my thing and seems to be more fan service than actually relating to the MV or song.

The song fits right in with the current trend with lots of Engrish and cutesy auto-tune voices.  None of the vocals blew me away although Tia is surprisingly strong for only being 14.  Her voice has a fullness which I enjoyed.  The girls’ vocal weakness came through in the live performance where singing and dancing left them gasping for breath and struggling to deliver their lines.  There was no rapping which somewhat disappointed me.   I was hoping maybe they could compensate for their weak singing by some strong raps. It seems Jae-Yoon could have done that very well – she has the deep throaty voice which works well with raps.  I did not like the chorus at all, first because of the random, nonsensical use of Engrish, and second because the girls sound like a bunch of shrill, prepubescent children.

Many of the new groups on the scene rely on dance moves to sell their performance, especially girl groups with their chest pops and body rolls.  Chocolat’s choreography was okay though much of it was reminiscent of Afterschool and SNSD.  I liked the chorus dance – it was simple and repetitive enough for fans to copy but not too dull.  In the live performance, the girls did emphasize the dance more which was a smart decision for it is their stronger point.  I do not like the excessive winking though I suppose it works with the song lyrics.

Despite my skepticism about Chocolat, I was pleasantly surprised and entertained by the girls.  I wasn’t blown away by their talent nor did the factor of 3 members being biracial really make an impact.  However they played to their looks and young age by going with the cute concept which works. Since they are so young, their voices aren’t at a level of maturity which I enjoy but I do see some talent there.  I think they can be successful if they show versatility outside of Bubblegum pop.

What do you think of these girls? Are they the next big thing or are their looks not enough for fans to overlook the lack of talent?