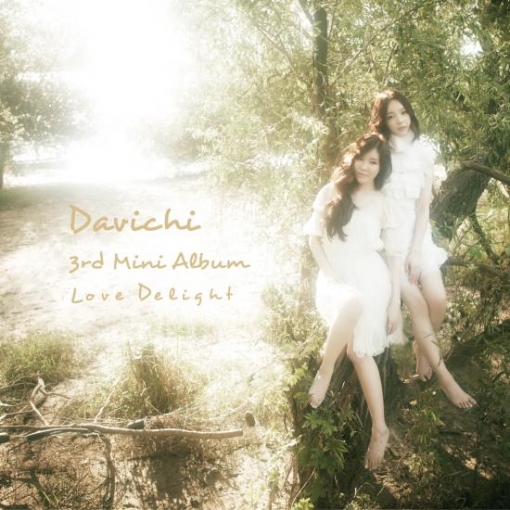 Kpop vocal powerhouse duo Davichi, return to Kpop after a year and four months with their third mini album Love Delight and its title track “Don’t Say Goodbye.” They were dealt a setback when all the songs on their new album were leaked online before the album’s official release on August 29th, but fans swore to support the girls’ comeback by not listening to the leaked tracks. Does Love Delight delight a Kpop fan’s senses?

The last release by the duo made up of Lee Hae-ri and Kang Min-kyung was May 2010’s Innocence, their second mini album.  Their newest effort, Love Delight, features 6 tracks, 5 new songs and an instrumental: 1. 안녕이라고 말하지마 (Don’t Say Goodbye), 2. 사랑 사랑아 (Love, My Love), 3. 다신 찾지마 (Don’t Find Me Again), 4. Happy End, 5. 비밀 (Secret), and 6. 안녕이라고 말하지마 (Don’t Say Goodbye Inst.). “Don’t Say Goodbye”  is a heartbreaking love song with lyrics that plead for a lover to not say goodbye.  “Love, My Love”  is a little more upbeat song although it still talks of asking a lover to not leave while reminiscing over past times together.  “Don’t Find Me Again” is a girl power ballad with a girl that won’t continue to mourn a lost love and vows to move on through the pain.  Davichi goes a little more upbeat with “Happy End” in which they vow to be alone for their happy end, yeah I think there’s some meaning lost in translation there.  “Secret” which was composed by Kang Min-kyung is a slow and sad love song.  Love Delight has a nice mix of songs, although there’s not much variety to be had from a duo known for their ballads and powerful vocals.  I find it funny that the album is called Love Delight with all the sad love songs it contains, Love Dismay might have been a more apt title.

The MV for “Don’t Say Goodbye” was also released and is a story based MV, although the story is a little disturbing.  A man finds Min-kyung in a rubbish bag outside his house and proceeds to take care of her and they appear well on their way to a love induced bliss although there is a flashback of the guy with another girl.  Then there’s the song, within the song’s MV which is always a bad sign…  I guess a happy MV wouldn’t make sense with a song that pleads for a lover to “Don’t Say Goodbye.”

Hmmm, I’m not sure how Mr. Creepy got a hold of the guy’s girlfriend and why he wants to trade for Min-kyung- it all kind of screams kidnapping/human trafficking to me.  It’s disturbing how the guy just leaves Min-kyung to Mr. Creepy, but at least he looks back that one time.  I enjoyed the song, it’s classic Davichi, and also the MV because although it’s disturbing at least it has substance to it.

I like Davichi, they’re not your average idols and consistently turn out good songs with strong vocals.  I do however wish for a little more diversity in their songs.  While I’m not disappointed in the duo’s newest release, I’m not exactly wowed by it either.

Davichi will make their live performance come back on September 2nd’s Music Bank.