Bol4's "Hug" Is Warm and Comfortable

With spring in full swing and summer only just around the corner, Bol4 returns all love-struck with a new title track “Hug”.

On the 2nd April, Shofar Music made the announcement of Woo Ji Yoon’s departure from Bol4. Fans will continue to see Ahn Jiyoung promoting under the group name as a solo act. Since then, she has been busy releasing a series of promotional stills in preparation for the new mini-album and has collaborated with Exo’s Baekhyun on the pre-release “Leo”.

On the 13th of May, title track “Hug” and mini-album Puberty Book II: A Flower The Butterfly Has Seen was released marking it as the first release as a solo act. Ahn Jiyoung has stated in the mini-album showcase that she wanted to express her gratitude for fans and love through this album. She commented on the production of the album and how she wanted to show more of what she has in a Bol4 manner.

“Hug” is a bright mid-tempo love song. The track is jazzy and subdued allowing for Ahn Jiyoung’s distinct vocals to take centre stage. The arrangement is simple yet effective is giving off the desired breezy uplifting spring feeling.

The track speaks of being young and in love. The small things reminding her of the one she loves and wanting to be in each other’s arms. The song likens being in love with the feeling of a welcome spring.

When the pleasant wind blows,
I want to see you, too.
I’ll run to you.
With your warm and good hugs

The MV reflects these emotions all too well. The idea is set around Ahn Jiyoung and her reaction to a message from the one she loves. Similar to the concept of the Disney animation Inside out we’re introduced to each element involved within her: Her eyes, brain, hormones, heart, ears, and mouth– all operated by a form of Jiyoung.

Each set is arranged with bright and spring-inspired colours. With all parts communicating and contributing to what is outwardly portrayed by this young woman in love.

The concept of the eyes is played within a Cinema setting, warning all the other sectors of what is happening. A preppy dressed Jiyoung operates the brain –the control room–set in an office room embellished with green floral walls and 60’s vintage decor.

Next is the hormones laboratory, where all the chemical reactions responsible for her external response happen. The heart as expected is the red furnace room fuelling the whole event. And finally, the ears and mouth as her forms of communication played by a frantic version of Ji Young trying to maintain enough communication to go round.

The MV is dotted with scenes of Jiyoung daydreaming about her love amidst a bed of flowers. The bright yet hazy quality of these scenes cements how smitten and deeply head over heels she is.

Clearly, the intention is to show how being in love is intricate and is more than what meets the eye. Collectively each part of her plays a vital role in this intense state. Ahn Jiyoung’s quirky and animated expressions of each character are endearing. The characterisation of her emotional journey paints a relatable picture for anyone in love.

If there were one comment to make is about this comeback it would be the track itself. Although the song intends to portray the warmth of being in love, it does sound very familiar and quite safe. It is understandable that Ahn Jiyoung wants to stick to Bol4 formula that fans are used to. However, “Hug” might not be as memorable as their past releases. Nonetheless, Bol4 delivers on its intended message and emotions.

For some fans, it will be odd seeing only one member from here on out. However, “Hug” proves to be a charming and stable comeback for the solo act. 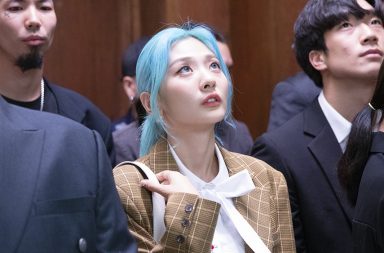 Bolbbalgan4 Consoles the Average Viewer as a Fellow “Workaholic”

Bolbbalgan4’s and 20 Years of Age’s Ordinary “We Loved”