Stray Kids Get Cute with "Get Cool"

Stray Kids dropped an MV for their fun hip-hop track “Stay Cool” from their album I Am You which was released back in October. While Stray Kids have experimented with their sound before, they tend to stick with rock beats and rap-heavy singles. However, with “Stay Cool,” the members created a funkier track with a piano melody. The song still focuses on the rap performances except the lines are delivered in a more bratty and looser tone similar to that of Pentagon‘s concept. In addition to a different sound from the norm, the boys also channel their inner aegyo with this amusing and silly MV.

Right from the start, we see someone pull a ticket that says, “Your wish is granted.” Throughout the rest of the MV, we see displays of “good luck” like finding a coin on the ground. The main setting takes place in a high school hallway and the members are all dressed in “nerdy” outfits with muted colors. For the conclusion, the boys are finally granted their biggest wish and they transform into cooler versions of themselves. They’re then seen in your typical “bad boy” black and red leather outfits.

On top of seeing the members play in little scenes, there’s also quirky imagery that plays on the words in the title. We see several references to honey which in Korean sounds like the English word “cool.” Then the Korean word for dog sounds similar to the English word “get.” When we see the dog and honey during the chorus it’s basically saying, “Get Cool.” The joke really plays well into the overall silly and carefree theme.

The dancing in the MV is fantastically chaotic. It comes together much like the dance routine in a musical play. The boys look like they’re just playing around with each other but it’s all finely choreographed. For instance, in the beginning, we see the boys on their knees with the others hopping over them. However, no one succeeds, and they all fall together at the same time. With such a joyful and positive song, the playful dance routine really coordinates well with the lyrics and beat.

On the first listen, the lyrics seem like they’re all over the place and like it’s a song about nothing. However, it’s a mix of individual stories each indicating how their day was lucky. Han’s rap stands out purely because of how ridiculous his excitement over his “luck” is.  He delivers the words with glee:

When I had chicken that night

When I opened the box,

Right after eating it,

Someone rang the bell,

That was my package 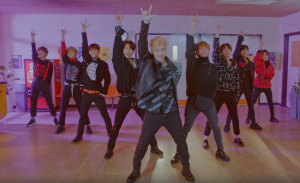 Although the song is about becoming cool and various lucky scenarios, the members mostly come off as cute and childish. Their definitions of “luck” seem more like slightly convenient and coincidental incidents. However, this is all from the perspective of someone with a bright outlook on life. Although it may seem unclear what luck has to do with being cool, the song’s purpose is about having everything finally falling into place. In this case, the song’s persona wanted to become cool and that was what represented their most fortunate scenario.

It’s great to see another side of Stray Kids and have them produce an MV for a B-side track on their album, with the MV bringing to life the positivity and quirkiness of the lyrics. Although the song’s concept and beat may sound similar to others in the music industry, Stray Kids brings enough of their personality to make it their own.

“Maxident” Sees Stray Kids Finally Fall in Love, In Their Own Style