For any artist, the most daring step is always the first one: putting yourself out there. In the scope of K-pop, it’s a leap of faith that’s oftentimes not rewarded. The reward is even smaller and scrutiny more exacting when coming from a known idol group.

Choo Hwa-jeong, an alumnus of now disbanded five-member girl group D.Holic, is willing to take the risk. Soon she’ll be revealing her solo debut. Her story is best interpreted in her own words. From her roots with her former girl group to her desires for her future, Hwa-jeong gives insight into her journey and her plans.

As with every conversation, we begin with an introduction.

“Hello everybody. I am Choo Hwa-jeong, who participated in the music variety I Can See Your Voice in 2015, and I debuted and carried out various activities in a girl group. Recently, I participated in one of the OST ‘Chu’ for the Korean drama Evergreen, and is now currently preparing for my solo debut.

Naturally, when an artist has taken on the task of reintroducing themselves to a public who knew them as a part of unit, it’s necessary to get a feel for what drives them. More importantly, it’s necessary to hear in their own words what motivates them, and further what inspires them to continue on with their dreams. “Singing is my greatest happiness,” Hwa-jeong reveals. “There is nothing as interesting as singing, and that is the reason why I want to be a singer.”

However, Hwa-jeong’s road to happiness was not always so sure. “I did not have any interest in making music when I first started singing,” she admits. It’s a bold confession. It’s not everyday you find an artist who’ll readily reveal that music wasn’t a viable choice for them. Especially when said artist wants to be taken seriously for their craft.

Hwa-jeong has a natural urge to tell a story. Her mind is filled with narratives. For her, it came naturally to let those narratives free, and later give voice to those same stories. “As I continue to sing, my interest in writing music starts naturally. It’s just like there is no reason why I like someone, I just feel like writing a song at some point. I would like to express the sound track with my song.”

With her desire to bring the imagery in her head to life, it made sense for her to choose a path that would get her creating music as quickly as possible. It’s a common plan: audition for a group and get yourself the training, exposure, and experience to make a way in the industry.

As a member D.Holic, she was the maknae, the group’s youngest. But there was something that set her apart vocally, and she became the main vocal. “It was a precious memory,” she says. “Although the group did not succeed, the memories and the experiences that I had with the group were very precious to me. I am still in touch with the members and I am glad that we are all working hard from our current position and role.”

It’s wonderful that the relationship remains intact after the unfortunate disbandment. Thus is the fickle nature of the machine. It’s not particularly comforting to know that in the ever-shifting landscape of the idol industry, you never know who’s bound for greatness, and who won’t be able to sustain the momentum and stand the test of time.

The music world in general can be quite painful to navigate. It can exploit the insecurities of those unprepared for how vicious it can be. Hwa-jeong embraces those unsure moments before she steps onstage, counts them as all a part of the anticipation of being able to sand in front of an audience and do what, in her own words, gives her the greatest happiness.

“I actually feel more nervous than scared. I feel that it is right to tremble with anticipation before going on the stage for [a] performance. In fact, I haven’t felt a lot of fear in my life. It is my character to find interesting moments in everything.”

Even with that confidence, Hwa-jeong isn’t immune to moments of extreme pressure and perhaps uncertainty in her own abilities.

“I am a very positive person, but there are moments when I feel that it is tough to work,” she confesses. “In fact, singers and entertainers are said to be a hungry job before they become an artist. Even with that, I will not give up and continue to appreciate music with my heart. Because I believe that there will be a day whereby people will get to know about my music, thus I will continue smiling even if I am tired. It is a fortune to smile and laugh.”

Her positivity drives her to continue pursuing what gives her so much joy. Despite the long hours, flashes of minimal self-confidence, in her mind the rewards far outweigh anything that could deter her from being a performer.

“I think that the most rewarding part is that the listeners feel touched or emotional after listening to my songs. And I feel happy that I am able to see the fans giving their support to me and cheering for me.”

It’s clear that music is something Hwa-jeong is dedicated to, something she continues to work toward. Since 2016, she’s maintained a YouTube channel where she posts covers of popular songs. These videos show a woman who is persistent, dedicated to keeping her skills sharp and improving elements of her craft to prepare herself for a future she’s determined to reach.

“I have never thought of any occupation other than being a singer,” she says, and even through email her conviction is strong. Still, it doesn’t hurt to have other interests, those things that allow you to put away the stressors of an unpredictable industry. “If I have to think about other jobs, it might be in the service line. I feel that dealing with other people seems to be right for me.”

With an resume that already boasts a world of experience many newbies can only dream of, I’m interested to know what she can say to those coming behind her. After all, you have to have guts to make it in this line of work. It can only help those with stars in their eyes when someone who’s been there before can give them a guiding hand.

“The advice that I can give to those who wish to become singer is that it will be great if they can love and enjoy music. And it doesn’t matter what other people say. [I] hope that he/she can become those people who are able to understand his/her own thinking.

“I am a positive person, but I used to dislike myself,” she admits. “I hope to become those kind of people that can say things to myself. And please enjoy music. It doesn’t matter how good you are. Enjoying is a great ability too.” 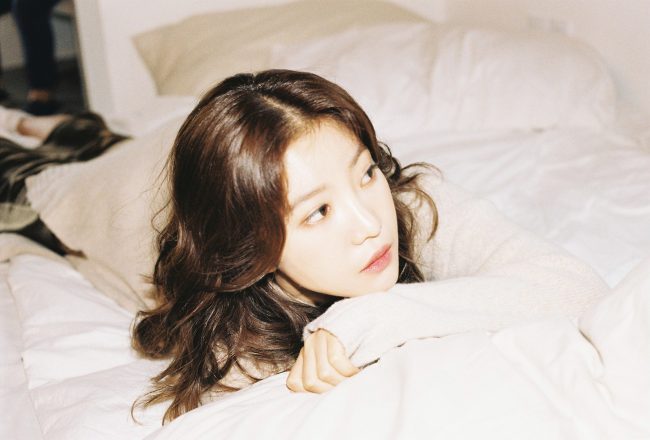 Hwa-jeong has one goal in mind, however. She’s working on new music, and very soon she’ll reveal what she’s been preparing.

“It is a ballad song that is suitable for the winter,” she says. “This song is both cold but yet warm at the same time. This is a sad song, but I hope to present the warmth of the song with my own emotions.

“The chorus of the song is outstanding,” she continues with confidence. “People can hear and feel the emotions from the chorus. I will be bringing a gloomy and sad ballad to everyone, and I hope that everyone will anticipate to the song.”

Hwa-jeong has no reservations about what she has to offer. When speaking about her time in the studio in preparation for her debut song and album release, she says, “I had recorded the guide version a few times previously, so I did not have much anxiety when I am recording the final soundtrack. I am rather sensitive during recording,” she continues, “but I do not show it to the people around me. I had recorded various versions of the song. I hope to bring out the best, thus if I am unable to bring out my heart and feelings, I will be very sensitive.”

With all this in mind, fans of the singer and her previous work have much to anticipate. “Great music,” she says. “I hope to be like my seniors Lee Sun-hee and Baek Ji-young, to sing as a Korean artist. Please anticipate it. 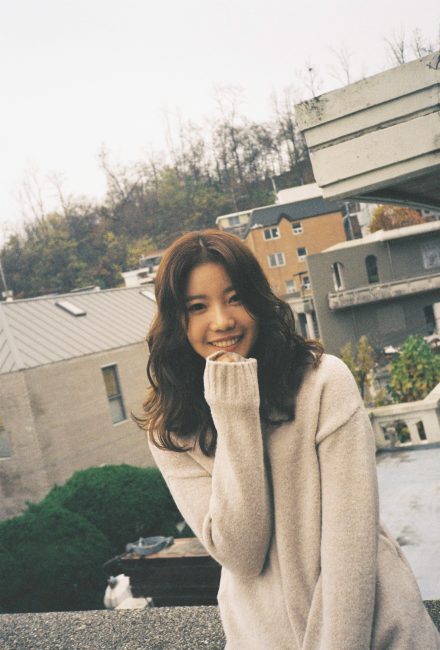 While it’s a shame we didn’t get the chance to meet face-to-face, Hwa-jeong’s honesty was a refreshing. Though with time idols have become less restrained with their opinions, it’s still a rarity to find someone, especially on the cusp of reintroducing herself the world, who’s so willing to be so forthcoming. Only time will tell what Hwa-jeong can bring to the music world. But her positivity and determination to get her stories out in the world bode well for the revitalization of her career.