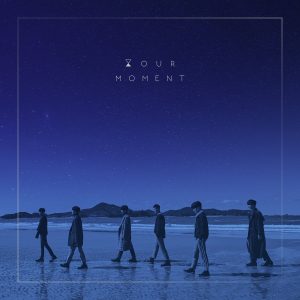 Cube Entertainment’s BtoB released “Beautiful Pain” the lead single from their special album Hour Moment on 12 November. “Beautiful Pain”, exploring the bittersweet nature of love, marks a graduation of sorts for the ballad group as they move onto their next chapter.

This latest MV explores the duality of love, best exemplified by the title of the song “Beautiful Pain”. This is the idea that we can experience the utmost of joy whilst in love as well as the excruciating pain that comes with its end.

The MV explores this right off the bat, starting the song with hints of conflict: the whine of a siren and beeping horns can be heard as the camera pans over debris scattered on the floor, representing the fragments of a broken relationship. This is interposed nicely with the next frame showing Hyunsik and a girl goofing around, epitomising the playfulness that embodies a new relationship and the calm before the storm. The use of lighting via a torch beam in that same scene and the transition of light and dark scenes between Sungjae’s white setting and Hyunsik in semi-darkness echoes that duality: dark and light, love and pain.

We see further visual references to the ups and downs of a relationship. During Ilhoon’s verse, the former is exemplified by the happy memories that playback on screens, whilst the retro guitar riffs throughout the song give it a nostalgic and introspective vibe. Meanwhile, Peniel’s rap encapsulates the downs: “the pain will disappear but the scars are forever”. The use of red smog lighting in one scene really magnifies the lyrics that are played over it: “We get coloured with painful love again” by giving the words a visual representation. This concept exploring the bittersweet nature of love is at the very heart of the song with the chorus summing up the cycle of love and the emotional highs and lows that come it: “I met my love, then break-up // For endless days, I cried and laughed”. Hyunsik’s low note near the end of the MV, that transitions to the climax, embodies the concept of ‘beautiful pain’ in vocal form. 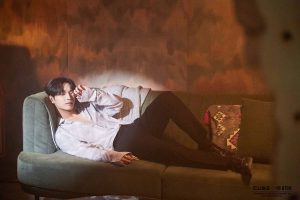 The MV also considers time and distance in overcoming the “beautiful pain” of an ending love. The motif of the hourglass, a shout-out to the album title Hour Moment and concept, is peppered throughout the MV. Two hourglasses can be seen in the foreground in the foreground and on the TV screens as Peniel and Ilhoon rap respectively. We also see sand running through Changsub and Sungjae’s fingers representing the relentless passage of time and again harking back to the hourglass motif. This imagery gives voice to our inherent understanding that whilst time will continue on and the pain will dull, in the immediate aftermath the heartache dominates.

Distance is symbolised by the aeroplane setting for Changsub and Peniel’s verses. During the latter verse, Changsub sings “time has passed and I’ve come this far” neatly tying the two concepts of time and distance together. The underlying message again is that in order to overcome the pain of lost love a healthy dose of time and distance are required to go some way towards numbing the pain. Echoing Changsub’s lyrics, there’s a sense of finality and inevitability in the lines “today will become yesterday” that Sungjae sings.

This concept of inevitability, in moving on, and the relentless nature of time is also sprinkled throughout the MV. Minhyuk sings “you can’t stop love so the pain repeats // it hurts so much but love comes to me again”. These lyrics are interposed against a scene of a train travelling directly towards Minhyuk symbolising inevitability whilst also suggesting routine and repetition. Again, there’s an exploration of duality as well as the cyclical nature of love. The lyrics suggest that although we can find love again, the cyclical nature of it also makes pain inevitable, but that this pain is in turn healed as we move on and find love again. 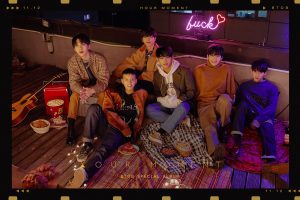 This contributes to the overarching concept of new beginnings that is being explored within this MV and the wider album. Hyunsik’s verse considers the fear of the unknown especially when we’ve grown comfortable and reliant on the presence of another individual: the girl buttoning his shirt, the reel of everyday “couple” scenes during the second verse, and the warm piano notes throughout symbolise the familiarity that can both comfort and trap us in relationships. This is encapsulated in the lyrics “starting over again is so hard” sung by Changsub. As human beings, our instinct is to avoid pain and the unknown but there’s an inescapability in how deeply love and pain are intertwined.

The concept of embarking on a new chapter and venturing out into the unknown reflect BtoB’s current situation. Leader Eunkwang enlisted into the military in August, the first of the members to do so and this marks the group’s first comeback, post-enlistment. This new chapter for the group will be marked by fluctuations in its line-up as members depart and return from military service. And particularly with the group doing a comeback sans their leader, there’s a sense of that feeling adrift which permeates the song itself. Eunkwang’s absence was most marked during the harmonisation of the main vocals in BtoB near the end of the song. The group is blessed with talented vocalists but having listened to BtoB for a number of years the absence of one member can be heard and felt quite keenly.

As there was no choreography in the MV this also meant there was no natural convergence of the group members into a single shot throughout the MV. Each member was instead involved in their own narrative story. Whilst this further enhances the sense of loneliness and isolation that pain brings, the absence of a group shot felt more like Cube was avoiding drawing attention to BtoB being down one member. As a fan, however, I think bringing the members together in the MV would’ve solidified the group’s endurance and paid homage to the bittersweet concept that the song encapsulates.

“Beautiful Pain” is a meditation on the duality of love, the time and distance required to overcome love and pain, as well as the inevitability of it all. It’s well-trodden ground in K-pop, nonetheless, BtoB brings a new take to it mostly because for fans it echoes the group’s current situation: the beauty and euphoria of a comeback juxtaposed with the sadness of losing a member temporarily. There was a missed opportunity to pay homage to that in the MV that would have made it even more satisfying and meaningful for fans. But that doesn’t take away from the fact that “Beautiful Pain” is another single that really lets the group’s trademark ballad vocals shine. Where their previous single, “Friend”, and album This is Us were a celebration of the group’s first chapter together and whole, “Beautiful Pain”, is more reflective, setting the stage for a new chapter with Hour Moment as the first page.