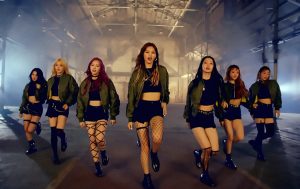 It’s a crowded field out there for rookie girl groups with seven-plus members, and while 2018 has seen some of these groups carve their niche, Weki Meki has not been one of them. Their latest comeback,  “Crush”, is a clear attempt to define their image in the girl crush lane, but the punches are pulled, resulting in an MV that’s weak at best and sexist at worst.

Weki Meki has always leaned towards the girl crush aesthetics, and “Crush” only cements this as their visual direction. It’s a lot of black and hot pink, mixing leather, athleisure wear and fishnets with pink decorations and neon lights. It’s very stylized, but it works for them, and the ladies of Weki Meki have no issues carrying the visual aspects of the concept.

The tone is set very well by the opening shot of Doyeon riding a motorcycle, decked out in black, with a lip ring as the piece de resistance. We get other shots of Weki Meki partaking in various activities, ranging from Suyeon hacking and Lua showing off her super strength to Yoojung shooting and Rina throwing ninja stars. Over and over, we are shown Weki Meki engaging in traditionally masculine activities while retaining their femininity.

Until you get to the MV’s halfway point, where the twist comes that to a one, Weki Meki are completely inept at whatever they’re doing. Lua breaks a table, Rina slices her finger open, Yoojung can’t hit a massive target 20 feet in front of her; they’re all god-awful. The usage of only masculine activities just makes it rankle more; Elly and Lucy’s failures adding subtext of “this is why girls don’t fix cars.” Only Suyeon appears to be mildly competent, as she succeeds in her goal of . . .  unlocking Space Invaders. It feels like an attempt to reassure the audience that Weki Meki are totally normal and not above their fans, but it comes off as Weki Meki being too stupid to live. 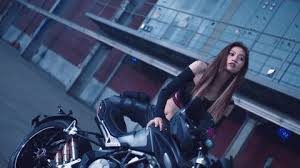 While female groups failing to achieve their goals are not new in MVs, the bait-and-switch just makes it so much worse. It’s not tongue-in-cheek. It’s not played for laughs. “Crush” is completely serious about the idea that Weki Meki are average girls, and you can tell this because they are incompetent, which is obviously cute and quirky. I don’t even know what audience this is intended for. It is trying to attract men by assuring them that Weki Meki might look tough but they can be collectively outsmarted by a stick, or women by letting them know Weki Meki shares their burden of being unable to to anything? Either way, “Crush” leaves a bad taste in the mouth.

The track itself offers no redeeming features. It’s a generic synth-pop song, which is mostly notable for not featuring the slamming guitar track Doyeon made her entrance to. There are token efforts made for a rock-tinged sound, by bringing in guitar and drums during the pre-chorus, but they fade in comparison to the squelchy, crowded synth layers. It’s not bad, but it’s not good either.

In the end, “Crush” may look the part of a girl crush concept, but it’s just another entry on the endless list of MVs, books, and films that glamorize female ineptitude. Even worse, that’s the only noticeable thing about it.