Not counting the journey as a full group with NCT 2018 Empathy, it’s been over a year since NCT 127’s last comeback with the impressive Cherry Bomb EP. Expectations were high for Regular-Irregular after such a wait, SM Entertainment’s high-quality teasers, and the announcement of the comeback also serving as a U.S. debut. Yet the title song falls short of meeting those expectations, therefore pulling the MV down a little with it.

In terms of its sound, “Regular” feels somewhere in between previous releases “Limitless” and “Cherry Bomb”, featuring the former’s style of chorus sung in unison, and the latter’s playful composition, though not as adventurously structured. “Regular” certainly stays in line with the sort of music we have grown to associate with NCT 127: a repetitive melody, a bold beat, and Taeyong’s interesting sound effects.

But the song fails to surpass the cohesion of “Limitless” or the creativity of “Cherry Bomb”, and doesn’t possess the wow factor that both these previous releases flaunted. Although their rap does seem to improve with each new comeback, and the vocals are strong and smooth as usual, something about “Regular” just feels lacklustre. The melody is a little too pronounced considering its oddly high pitch and bland sound, and the song doesn’t particularly stand out as the breakthrough hit that SM is marketing it as. Why Jungwoo was added to the lineup when the distribution of lines in NCT 127 was already so skewed doesn’t do much to help their cause either. 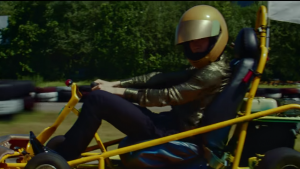 The MV was clearly well-funded, featuring memorable shots such as of the tiger, and Mark and Taeyong’s dazzlingly stellar rap scene. There isn’t much in terms of plot, but the inclusion of arcade racing games turning into physical racing — around a circuit track as well as on empty roads in expensive cars — alludes to the lyrics about reveling in self-made success, and of actively working towards dreams instead of just playing around and moping in wishful thinking. This is emphasised by the gold background to the dance scenes, and the muffling effect on the music drawing attention to Mark’s “Everyone’s jealous, I did it all by myself”.

The inclusion of this line feels almost necessary, considering it’s still a song boasting about success, from a group designed by a successful leading name in the K-pop industry. It also works well to counter the obsession with wealth, and dissatisfaction despite it, in the lyrics of the English version of the MV. 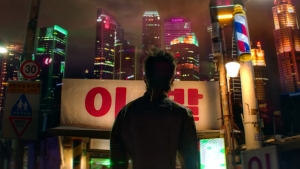 I am too rich to compete

So don’t compare them to me

We are not the same

Only one of me (English version)

Despite the interesting way in which the lyrics of the two versions work against each other, for a U.S. debut, perhaps a similar message as the Korean version would have been better, as the American general public isn’t likely to research the more inspiring and relatable Korean lyrics to compare them. The additional shots of jewelry and flashing lights in the English version only make it seem even more of an ungrateful boast in isolation, which is probably what the target audience will see it in. For a debut, it feels a bit too materialistic.

We’re aiming for a higher place

We are not the same

It’s my only value (Korean version) 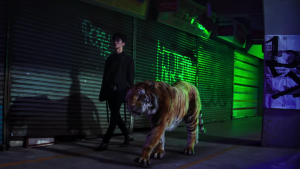 There are more witty lines in the Korean lyrics: “Stars in the city, in front of the CT, there’s an N / We don’t chase after wons, be the one one one”. The use of wordplay across two languages is definitely impressive, and contributes to the message of working hard to excel. Having many of the MV scenes shot at night — sometimes in shabby alleyways, sometimes in more luxurious settings — also adds to this, and gives the video a mature touch. Night being the time of dreams and the time of passionate effort to achieve them, is now also the time to celebrate them.

Winwin’s skydiving shots interspersed throughout the MV are definitely a highlight. Amongst the cold and indifferent cityscape, his courageous leap in the dark is symbolic of the individual work and sacrifice it takes to reach where they are now. This leads to the question: don’t they deserve to enjoy the adrenaline rush from it? The way in which the MV begins with his solo shot, then features both solo and group shots of the members, and finally ends with a crowded scene of the group and extras, suggests the additional strength gained from working together. 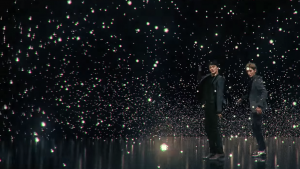 Unlike its message, however, the MV isn’t too cohesive. SM’s shift to more symbolic and aesthetically pleasing videos in recent years, as opposed to the older box-style dance MVs, often results in confusingly packed videos that flit from one quick shot to another, and “Regular” is another victim of this. There’s often too much going on, with multiple completely different settings being thrown together on the storyboard to show off the thought and money that went into creating it, and it’s a bit much. In fact, the English version flows better, as the extras are shown more and so their presence at the ended isn’t so sudden as in the Korean version.

Nevertheless, on the whole, the MV still does its job of portraying individuality, idealism and self-satisfaction. Combined with a better song, it might have more of an impact on promoting these themes. It will be interesting to see how both the Korean and U.S. videos will be taken by each of their respective audiences.