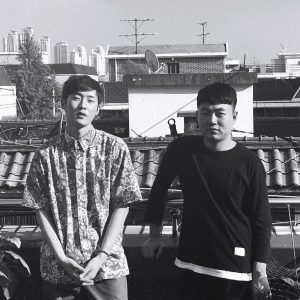 It’s that time of the year again. The streets are coated in scarlet and gold, leaves are fluttering down like multi-coloured rain, there’s a fine mist in the air, and the dip in temperature is blowing the heat of summer a goodbye kiss. Another autumn has arrived, fading in like a soft hymn, while the earth prepares to sleep again.

From where I live, the closest I’ll ever get to experiencing the season of mists and mellow fruitfulness, as described by John Keats, is by sipping a hot cup of tea while listening to songs that remind me of orange skies and golden dreams. That’s why I’m so, so glad that I chanced upon Aleph while looking for new K-indie artists on Mirrorball Music’s YouTube page.

Hailing from Mun Hwa In, the same label as Oohyo, Cracker and Kream, Aleph is an indie folk-rock duo that comprises vocalist Lee Jeong-jae and instrumentalist Kim Han-sol. Having made their official debut last October, the two come together to create music that touches on the notions of adulthood, love and loneliness through pensive lyrics and a raw acoustic flavour. 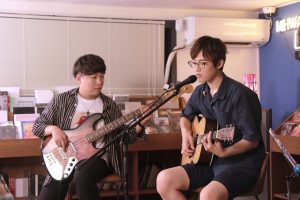 Like many other underrated artists, there isn’t much information about the duo and their music online. Aleph might be only a year into their debut with a humble discography, but they’re a refreshing break from the overproduced mainstream industry and even mainstream K-indie. Their debut mini album 1 only has six tracks, but each is a masterpiece, nuanced with individual expressive and creative charms. They gracefully embody the emotional sensitivity of everyday life and adulthood.

Besides the occasional gigs and guests performances here and there, they’re pretty quiet with their releases and promotions – their most recent release is “Some Day”, an OST for web drama series It’s Okay To Be Sensitive – and most of their publicity stems from song recommendations of other artists.

Probably their most popular song, “No One Told Me Why” talks about the complexity of humans – how we yearn for affection, but also shut ourselves away from those who try to reach out. In this earnest and genuine piece, Jeong-jae successfully displays his vocal prowess without overpowering the song, while the instrumental remains beautifully unadorned, creating a simple and relaxed soundscape.

If the instrumental is unornamented, the MV lies on the other spectrum, with its exceptional cinematography and symbolic narrative. It features two young children from different backgrounds. We see a girl listening to a cassette tape by the balcony, while a boy admires her from below in silent fascination. When she notices him staring, he turns away in embarrassment and is about to flee before she stops him, handing him her cassette tape. But we soon come to a realisation that the boy is actually deaf.  Hoping to get closer to the girl, he struggles to listen to the tape and eventually destroys it out of frustration.

The song brings to mind caramel leaves waltzing in mid-air under a gloomy gray sky. In life, we will struggle – we are born to struggle, in fact – but we will move on and continue to struggle again, because if we stop struggling, we stop life. Likewise, as autumn marches toward winter, there will be strands of brown in the distance, rain will thicken and leaves will fall relentlessly, but all these are ephemeral – sunlight will find a way once again, filtering through the bare trees, unhindered.

Another beautiful track is “Fall in Love Again”, a bittersweet love song that rings with melancholia and sincerity. Capitalising on the serenity and rawness of both vocals and instrumental, Aleph proves that a song doesn’t need to be excessive to tug at heartstrings.

As soft as fallen leaves, Jeong-jae’s vocals are heavenly in their symmetry as he sings about wishing to try again in love. The acoustic soul melds with layers of whispers, soft piano instrumentals and guitar riffs, encapsulating a poignant solace and a sense of nostalgia.

Filled with emotive frankness and emotional depth, Aleph’s music treads into the trenches of stillness and voidness of life. Their songs are a wonderful companion for a little getaway from the hustle and bustle of life, or for watching golden leaves pirouette down before winter comes to claim them. I recommend checking out “Who Am I Today” and “Around” featuring Greenblue as well.

Though I can’t experience the impeccability of the romantic season, Aleph does a pretty good job at filling up that void. They have so much potential in terms of creating their own sonic sound and honing their artistic maturity, and I’m definitely looking forward to finding out what other breathtaking masterpieces they have up their sleeves.