Got7 Find Their Groove in "Lullaby"

Got7 first arrived on the K-pop scene in 2014 as a scrappy band of boys next door. Since then, they’ve moved on from the stunt-heavy performances of “A” and ridden the angst and hip-hop stylings of “If You Do” and “Hard Carry” designed to mature their image. Some idol groups, like Seventeen, debut with cute and manage to keep it fresh. Others, like B.A.P, were hardcore from the start. But it took Got7 a third shift in strategy to find a concept to call their own. Their latest MV for “Lullaby” rides the wave of the visual style they’ve been shaping since 2017’s “You Are”. Now fully entrenched in their own take on synth-heavy deep house, and with a title track that makes the surrealist aesthetics the message of the song itself, they’ve finally nailed the formula.

Got7’s third LP Present: You is partially built around a collection of solos, and the music video for “Lullaby” furthers this distinction by giving each member a separate storyline. It’s a complete contrast to earlier MVs such as “Girls Girls Girls” and “Stop It Stop It”, which prioritised the presentation of the group as a whole, with the boys consistently depicted together. Now four years into their career, the members’ characters are prioritised. We see Yugyeom, the main dancer, show off his skills during a dance break, while Jackson takes to the stage in a nod to his solo career. JB, the team’s main songwriter, finds himself in a universe of stories, while BamBam’s bright persona is echoed in the sunny oasis he explores. It makes for an eclectic mish-mash of scenes, yet provides a clever fit for the dreamscape set-up. 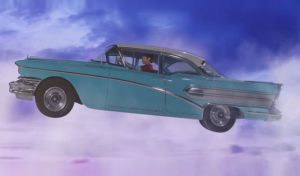 It’s the little touches, like the butterflies fluttering into life around Mark’s feet, or Youngjae’s teddy bear singing along with the chorus, that elevate the MV from quirky to a pastiche of fantasy and reality. What dream isn’t just a bit off-kilter? Jinyoung’s flying car could have been stolen straight from Warner Bros’ stash of Harry Potter props, and JB peers through his bookcase to discover an alternate universe in a smart riff on Narnia’s magical wardrobe. There’s an air of childlike whimsy to every scene that ties in perfectly with “Lullaby”’s lyrics of new love:

Feels like I’m dreaming in the middle of the day
I just can’t believe it
Still feels like a lie
When I open my eyes, I’m in your arms

I’m letting out a sigh of relief
Girl, when you call my name
Anything that passes through you becomes beautiful
I bloom like new, I bloom

This poetic comparison of romance to dreams is nothing new to K-pop, yet Got7 have reinvented their latest love song by releasing it in four languages, in a gesture of gratitude and respect to the fans who came to support their recent world tour. It’s an interesting move – one that challenges prior notions about music and its audiences. If an act chooses to sing the same song in a variety of languages to appeal to fanbases in multiple countries, while new platforms such as YouTube and SoundCloud carry their work across the globe, the established borders of country-specific music markets are effectively bridged. It’s not a truly new idea: Exo debuted already spliced in two Chinese and Korean units, and K-pop acts have been rerecording tracks in Japanese since the glory days of BoA and DBSK. But English releases are rarer, and Spanish releases are a relatively new phenomenon, yet to be fully explored. Here Got7 are ahead of the curve.

With an audience this vast, the track’s fairly generic lyricism makes it both simple to translate and relatable enough to appeal to a wide range of listeners. Yet there are moments of poignancy – BamBam raps of sunshine and calm as the viewer watches the camera pull away to reveal his tranquil sunlit oasis. Mark talks of finding light in the world’s darkness while the camera pans past the little flowers appearing between the concrete at his feet, signifying fresh bursts of hope. This alignment of lyrics and imagery is what makes “Lullaby” work so beautifully as a whole – it isn’t merely a song or collection of scenes, but a fully realised narrative that draws the audience into the world of Got7’s imagination.

The camerawork throughout “Lullaby” does an excellent job of inviting us into the dreamscape. During the first verse, a similar technique is repeated for each of the members’ scenes: beginning with a close-up of Jackson’s face, the camera pulls away to frame him in a bird’s eye shot as he explores the record store. The focus similarly hones in on Youngjae and JB, on the flowers at Mark’s feet and Bam Bam’s closed eyes, before panning away to allow the viewer to take in the scene in which each member is situated. In this way, we are invited to discover these new worlds alongside Got7.

The camera angle swivels to imitate the turn of Youngjae’s head to watch a flock of bottles swooping towards the ceiling. We are eye-level with Jackson as he lifts the microphone to his lips. We glimpse Mark’s feet running down the street before the camera tracks to follow him. The clever framing of each shot enables us to experience every moment alongside the members, and the ever-roving camera gives our swirling dreamscape a sense of bittersweet transience. It is no coincidence that the video’s final shot is of a single, wide eye that closes on JB’s literary universe, hiding it from view. Like the new love the boys sing of wanting to last forever, this effect gives the impression that the scene plays on beyond our ability to watch it.

The moment is constantly in motion, moving towards a new discovery. The speed of frames is matched by the rise in the song’s tempo as it builds towards the dance break and final chorus. This is when Yugyeom begins his solo freestyle and the camera falls back to resume a standard medium long shot as we watch him dance.

The performance scenes hold the video’s jumble of storylines together. The members shift from their cute pastel outfits to monochrome, from a stark white box set to a vibrant dance floor that pulses with every step. The choreography incorporates intricate hand gestures – the best of which is the point move, when the boys mime pressing their palms together and tilting their heads as if to sleep. A burst of energy comes with each chorus, when the shifting formations break into a burst of footwork, but for the most part it’s as slick and groovy as “Lullaby” itself.

The song is hypnotic. Production team Full8loom draw from the deep house genre to create its pulsing beat, rich in synths and embellished with light percussive flutters. “Lullaby’s” greatest strength lies in its groove, best driven by the vocalists. During each verse, Got7’s rappers are weighed down by autotune, distorting their delivery into a kind of almost-singing that fails to lift the track’s energy. Luckily JB and Jinyoung carry the song’s sticky melody, their ad-libs mellowing out the beat of the bass-heavy choruses. It might almost be too busy – yet the dance break provides the perfect balance point, giving the listener a moment to breathe before the final chorus hits home. The production is an interesting blend of retro and modern – with the disco-laced riffs layered over a synth-pop core. A strong addition to Got7’s discography, “Lullaby” builds on the pop-EDM of “Look” and “You Are” to showcase the new sound they’re shaping in its brightest, most energetic form yet.

This ebullient sound and aesthetic is grounded in the MV’s use of colour. The palette is aggressively oversaturated, creating a visual too exaggerated to be true to life. And while the contrast is amped up, the colours themselves draw from pastel tones – such as the turquoise that frames Yugyeom’s subway station, or BamBam’s pale-gold desert. This faded tinge gives each shot a vignette-like touch, as if we’re watching reels of old film flicker by as the posters and toys in Youngjae’s room float into the air. The retro feel is echoed in the styling – the members don loose shirts in washed-out hues of rose-pink and lavender to perform the choreography, accessorised with cute neckties and ruffles. Mark and BamBam sport violet and bleach-blonde dye-jobs, blending right in with the rainbow-bright backdrop. It all adds to the cotton-candy vibe of the whimsical setting.

The unreal edge to the video is fashioned through the choice of settings, and the props that accessorize them. I’d guess that the majority of this was shot using green screen, and while some segments, such as JB’s alternate universe, are beautifully rendered, others are more obviously illusions. Yugyeom’s subway station in particular has a faintly cartoonish feel to it – the floor may be solid, but the 2D trains that rattle by clearly aren’t. It’s a sense exacerbated by the neon-bright sign that readies the audience for the ride at the song’s opening, and the wall of boom boxes that appears in the backdrop as he dances. It’s a little retro, a little quirky – not quite meant to be believed. Nor are Mark’s flowers, slightly plastic, or Jackson’s paper-thin audience.

Each illusion looks as if it might just disintegrate, should you reach out to touch it – and it’s this transparency that sums up the concept of the song. What dream is perfectly realised? Do you really know everything about that girl you’re falling for – or is the mystery of not knowing anything at all part of the high of first love? Got7’s imperfect universe makes room for these questions, for the plot holes, and that just makes it even more relatable. It’s a style that enhances the surrealist quality of the ideas themselves, creating a unique visual that brings “Lullaby’s” concept of escapism and wonder to the fore, merging the MV and song into a single performance piece.

In this comeback, Got7 have shifted into a new level of maturity. With an album preceded by a string of MVs allowing each member to showcase his own musical style, an addictive new song recorded in four languages and a music video that makes the aesthetics they’ve been experimenting with the focus of the visual itself, Present: You offers fans a fully packaged concept. “Lullaby” headlines the next stage of their career, as the boys branch out into solo endeavours and continue to shape their collective sound. If what’s to come is as clever and cinematic as this MV, I can’t wait.

In the meantime, JYP needs to release those stunning solo videos in full length editions…