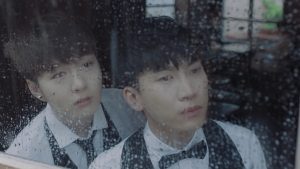 BtoB Blue’s latest single, “When It Rains”, is unusual, but not in and of itself. It seems an unlikely release in a season that’s often filled with energetic, cheery earworms, or relaxed but still upbeat tracks. The MV similarly bucks summer visual trends of pastels and bright colours for a muted, sepia-tinged colour palette, accompanied by straightforward but thoughtfully employed camerawork.

The result is reminiscent of BtoB Blue’s first release, “Stand By Me”, in how simple yet effective the MV is in conveying the melancholic mood of the song. Where “When It Rains” differs is in the hints of warmth and comfort that shine through gently, like the first rays of sun after a storm.

“When It Rains” is a ballad that is more in line with the sentimental, slow releases of winter. The soft guitar chords and bell-like synths that echo as the song begins sound especially Christmassy. The song sticks to a familiar song structure, building up from soft, wistful verses to an emotional but restrained chorus. With each repetition of the chorus, the pent up sadness and longing for a lost lover becomes harder to contain, and eventually bursts out through richly layered harmonisations and adlibs, and the introduction of an electric guitar.

While the song moves from restraint to an outpouring of emotions, the MV shifts in the opposite direction, from melancholy to peace. While the song has a dramatic slant, the MV has a muted, everyday quality. The loose narrative follows the BtoB Blue members on a rainy morning as they run errands or go about their daily routines. Hyunsik arrives at his cafe in the wee hours of the morning to make pastries and desserts, while Sungjae buys some groceries. Changsub sleeps in, and Eunkwang, dressed as a waiter, wipes down tables and arranges flowers to prepare for opening. 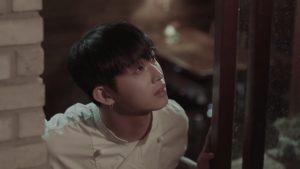 The intense longing expressed through the lyrics is subdued in the MV. It is conveyed through close-ups of the members’ faces as they pause in their chores to gaze pensively at the rain. The muted colours and gentle rocking of the handheld camera adds a wistful, lulling quality to the ordinary scenes. The camerawork is unhurried: it lingers on the members’ expressions, on a slow stream of boiled water as it circles over a coffee filter, and on drops of coffee falling into a flask in a beautiful visual parallel to the rain outside the cafe.

Despite its overall melancholic mood, the MV also provides a subtle sense of comfort. Shots of Hyunsik and Changsub leaning against the windows, with the rain as a backdrop to their sorrowful expressions, juxtapose light and darkness. Their faces are mostly cast in shadow, but the sunlight hits their profiles to create a visual and emotional contrast. The colour scheme of the MV may be muted, but it leans more towards warm tones thanks to tinges of sepia, rather than towards the unrelenting coldness of “Stand By Me”’s palette. The mix of sadness and warmth finally gives way to a sense of comfort when the members, wistful in their solitude, come together for a cup of coffee and some small talk before the cafe opens for the day. 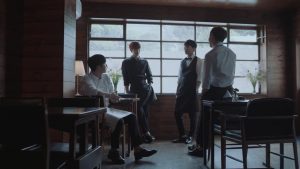 Much like the song, the MV of “When It Rains” sticks to the familiar, but it is executed carefully to make its visual and aural messages clear. It shies away from complexity in favour of simplicity, an effective approach that allows BtoB Blue’s vocal prowess and emotional delivery to take centre stage. Neither the song nor the MV has frills or surprises, but they are likely to stand the test of time.