In2it Falls Short in "Sorry For My English" 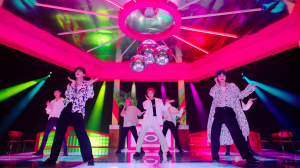 In2it, the seven-membered group formed from the finalists of survival show Boys24, joined the streak of summer comebacks with their second single album Into The Night Fever, featuring the disco-themed title track “Sorry For My English”. While the release is colourful in terms of music video aesthetic, the song itself does not match up to the video and is ultimately a fun but boring comeback for the group.

The various sets featured in the MV fit the theme perfectly, from the vibrantly lit squares on the dance floor to the shiny disco balls, complemented by a nostalgic choreography performed by the members. The difference in lighting and colour schemes used between the classroom scenes and the hyped club scenes further emphasises the contrast between the two sets as well as the increase in the liveliness of the members when they were having fun at the club (although the dress-up and random dancing scenes were on point as well).

While the bright hair colours of the members match the flamboyancy of the disco theme, it is a pity that their outfits did not follow suit. Apart from the wilder red suits donned by Inho and Hyunuk in certain scenes, the members stick to a flashy but safe style throughout the music video. They definitely look amazing here, but the comedic factor of the video could have been brought out even more strongly had they gone full out disco (sparkly shirts and bell bottoms anyone?) 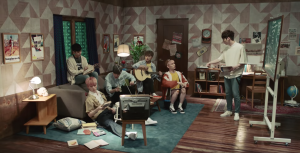 The MV features a cute storyline beginning with the members getting bored of studying and Inho inviting everyone to go to the nightclub where they have fun but from the second half of the MV onwards, the scenes linger on too long at the club’s dance floor, without the smooth transitions which make the first half interesting. Even with variations like the members’ wardrobes and the changing of the lights on the dance floor, the MV drags because these variations are not obvious enough.

It does not help that the phrase “sorry for my English” is repeated excessively in the song as well, although it is pretty catchy, especially when said with the “oops” at the beginning. The phrase makes up a good fifth of all the lines of the song and causes it to become boring because of how repetitive the chorus is. This is unfortunate because the verses, falsetto pre-choruses and rap parts are all pretty solid, accompanied by the pulsing dance beat and the full rhythm guitar-brass instrumental, but these all build up to a chorus which fails to deliver.

Name, age, house, shh, stop
Save the introductions for later
Just your eyes and your movements are enough
What other words are needed?

Beyond its chorus, the lyrics of “Sorry For My English” are pretty imaginative, adding diversity with its inclusion of other languages (English, Japanese, Chinese and Malay) and it speaking of ways to feel and express attraction beyond words — such as through para-linguistic cues — something the colourful and dance-centric MV perfectly captures. The spontaneity and carefreeness that come with such attraction are embodied well in the way the members let loose in their actions and the comfortable way they sing the lyrics. The members appeal to the camera very naturally throughout the MV as well, especially in their solo shots, adding to the fun of the song. In2it displays a chemistry here which few groups have so early on in their career, perhaps owing to their experience on Boys24 and the 1.5 years they spent performing together before their debut as this group.

Their second comeback of 2018 following April’s “Snapshot”, In2it has been having a busy year thus far and they continue to explore different styles of music as they aim to find their identity and niche. While they might not have quite grasped it with “Sorry For My English”, I am excited for the innovative concepts In2it will throw out in the future and will look forward to the day they unleash their full potential as a group.