Chungha's "Love U" is Summery but Generic 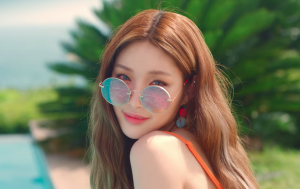 Only a year into her post-I.O.I. solo career and Chungha has already put out two resilient hits. Both “Why Don’t You Know” and “Roller Coaster” managed to hold their own on the charts and brought Chungha many new fans — including myself. The release of Offset was impactful enough for my fellow Seoulbeats writer Lo to proclaim Chungha the new queen bee of K-pop, and put her in the number one spot on both our 2018 Mid-Year Review Comebacks and Mini Albums lists.

It’s safe to say the release of Blooming Blue and its lead single “Love U” came with much anticipation. And maybe I set my expectations too high, but “Love U” and its MV feel a little too generic. However, in the season of light and breezy releases, that may not be the worst move for Chungha at this point in her career.

There’s something to be said for sticking with a style, and Chungha has definitely found her niche in the EDM-infused pop banger. Similarly, her videos have made the most of her two greatest assets: her dancing ability and visuals. Chungha is, for all intents and purposes, the ideal package for a solo female artist. With enough talent and charisma to hold her own in a saturated market, MNH have certainly done a great job of marketing her and her unique color thus far. But while “Love U” gives me everything I want in terms of visuals and a summery mood, it’s lacking that little bit of whimsy that drew me to Chungha in the first place. 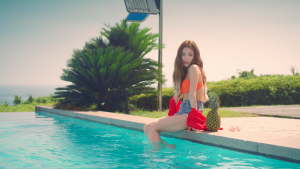 Like every summery-for-the-sake-of-summer MV, “Love U” isn’t pretending to have any plot. Instead, the MV focuses on Chungha. Chungha poolside, Chungha walking, Chungha rolling around in a bed, and the most mandatory of all summer MV shots: Chungha on the beach at sunset. There is something about meteorites that bookends Chungha being fabulous in all situations, but it really isn’t fleshed out enough to even deserve anything more than a mention.

Make my heart flutter even more
Like I’m the main star
(I really want it)
It’s like a movie without an ending, I’m trembling 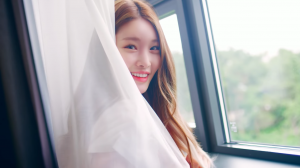 Don’t get me wrong, I’m all for this hyper focus on Chungha’s visuals. If anything, the MV confirms that Chungha is naturally alluring even in the most mundane of situations. She embodies summer in the way any good Instragram influencer would: by knowing her angles and the power of an eye smile. Even if nothing is really happening it’s easy to become enraptured by each scene. In that way, the MV is another success for MNH, who have given fans what they want. Chungha pulls the viewer in visually, much the way the lyrics invite a lover to come closer.

I’m not afraid anymore
In my heart, you’re not a friend
You know this, you feel the same 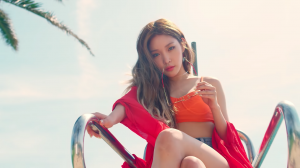 However, there’s a playfulness that is lacking in this MV in comparison to her previous releases. Aside from holding a pineapple on her head, and seductively biting a cherry, the MV relies more on generic summer shots and less on Chungha’s quirkiness. Perhaps MNH spent so much on the location of the MV that all they had left for a props budget was some fruit and a book. Chungha makes both look very lovely, but where are the sky dolphins and neon black light lipsticks? Those little touches in previous releases added so much, and in “Love U” they are sorely missed.

Aside from the lack of playfulness, the camera work also is a bit of a doozy. Nearly half the shots are filmed with abrupt, and sweeping camera pans. The camera can’t seem to hold still, and it makes the MV nauseating at times. This is especially true for the dance cuts, where the camera is moving in and out, up and down, and all around so quickly that it’s hard to get a feel for the actual choreography. It’s a bit like the viewer is a fly in room, trying to avoid swooping limbs and hands while looking for a good place to land. 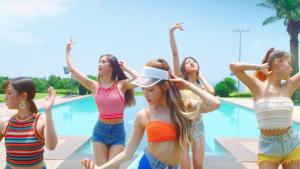 Even more disappointingly, the frantic camera work makes it difficult to catch all the subtle expressions of Chungha herself. Chungha excels at the quick wink, or eyebrow quirk at exactly the right moments in the dance. She knows how to embody choreography, and has the grace and charm to weave her own personality into complex moves. It’s a shame that the filming style distracts from these little details that could have helped to keep her the focus of the dancing scenes.

Despite some minor disappointments, when paired with the track, “Love U” and its MV make sense. “Love U” is upbeat, light, and enjoyable — there’s no heavy beat weighing it down, or a bridge that feels out of left field. Lyrically, it’s nothing too heavy, just a dash of innuendo and invitation. It’s digestible, and just repetitive enough to stick. The MV is much the same; nothing particularly stands out, but it fits into the mold of a summer release. It’s not trying to be more than it is, and I can appreciate that. 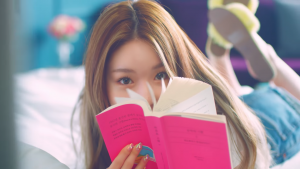 At the end of the day, Chungha’s “Love U” is more generic than memorable. Even lyrically, there’s little that stands out. However, Chungha can hold her own even in the most mundane of situations. And while I was looking forward to her to showing off even more whimsical facets of her appeal, sometimes, summery for the sake of summery is okay — especially if it’s Chungha at the center of the release. The song is public friendly enough to guarantee plays, and its seasonal appropriateness lends Chungha plenty of opportunities to promote the release at summer festivals and on music broadcasts. “Love U” will keep Chungha in headlines, and that’s MNH’s main goal during the busiest of comeback seasons. I just wish the MV would have lended itself a bit more to Chungha’s charms.