Victon is Sentimental in "Time of Sorrow"

Victon’s latest single album, “Time of Sorrow”, doesn’t fit the seasonal mood like most of the group’s recent comebacks. It also deviates from Victon’s other title songs by lacking a noticeable beat; despite the sad lyrics of previous comeback title “Remember Me”, it still pulled off a heavy sound. But “Time of Sorrow” seems to be a more confident release: it presents itself as a step past the group’s comfort zone into something more artistically ambitious.

The song is a nostalgic and tender exploration of loss. The video shows different ways of dealing with loss, including a variety of emotional responses, and the fluctuation of the feelings that go along with it. The MV and lyrics present loss as a moment they’re in, and though the melody and slow shots suggest hopelessness, they allude to a possible recovery from it: there’s hope for future happiness after this moment in “Time”.

The music and lyrics establish the blur of emotions of the song. The song itself is, as expected, slow and sad, with a repetitive melody to create a sentimental mood. There are moments in which the vocals stand out, particularly in the pre-choruses. However, the highlight of the song is when rap and singing are juxtaposed near the end, joining Hanse’s pained words with Chan’s raw vocals. Instead of being clearly separated like before, this combination demonstrates a turbulence of feelings, between passive and active, accepting and bitter.

This can also be seen in the difference of emotions in the lyrics, which range from mournful to positive, and back to serene reminiscence. We can see moments of hope:

But the spring breeze comes

The day when we love again 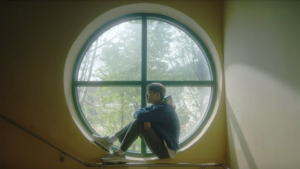 Only to be followed by resignation:

In the memory we were beautiful

But I bury it deep in my heart

It’s unclear what exactly the source of the loss is, but the lyrics address a lover who is no longer with the narrator of the lyrics, whether through a break-up or by death. The flower symbolism in the lyrics, which is mirrored by the MV, presents the love as something natural and beautiful, but also mortal and therefore destined to end.

Overall, the music and lyrics work well together to illustrate the multiple stages in the process of sorrow. There’s still some ambiguity about the details of this, but this leaves more space for the feelings themselves to be fully explored. 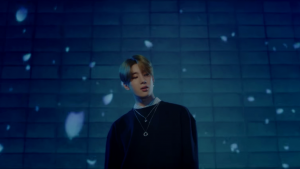 The MV emphasises the difference between the past and the present; lonely solo shots from the present are propped against slow-moving innocent and nostalgic school scenes from the past, which introduce a girl who is presumed to be the lover that the lyrics are about. Lyrically, the conflict in themes and emotions is seen best in the bridge, as the narrator can’t decide what he wants from the lover, or how he wants to deal with the loss:

Hope we can meet again after this

I miss you so much

The dance scenes act as a surreal bridge between the past and present, as they clearly stand out from the rest of the video with their unified emotion between the boys, suggesting sorrow to be a universal feeling. The contrast between their decorative white shirts, reminiscent of their previous innocent happiness, and the outside nighttime setting — the misery of the present — shows their “Time of Sorrow” as its own piece of beauty.

Although the lyrics do foreshadow the cause of the loss (“Please stay there as you are for our undying love”), we only fully understand the sorrow with the lily at the end symbolising the girl’s death, which also acts as a conclusion to the flower imagery set up throughout the MV. The previous happiness makes the sadness now even more impactful, as we finally feel the truth of what the song and MV have been working together to build up towards in their portrayal of sorrow. Hanse’s rap, which cuts to the rawest emotions without trying to veil anything, is now more understandable:

I’ll make you think about me as punishment

I had a tough time because of you 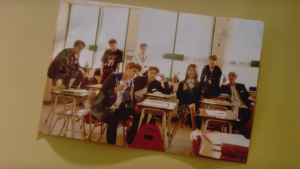 The photograph taken in the classroom is a snapshot of a moment that’ll always be stuck in the past, and so in itself is a summary of the song’s message. Victon’s “Time of Sorrow” uses some ambiguity so that it can be more about the boys’ responses to loss, and the feelings of the song and MV, than what actually happened to cause it. By only making it obvious at the end instead of earlier, we’re not distracted by the details and can focus on the mood of the song, so this more artful approach makes the song weightier and less cliche and than it might have been otherwise.

Overall, the release has shown Victon’s willingness to experiment with different approaches to their music and MVs. Although the release is perhaps a little mistimed for late spring, and as a slow song, is less likely to be enjoyed by everyone, it is an impressively creative move for the group. And despite this, it has received recognition, if second place on Gaon’s weekly album chart is anything to go by.

(Gaon, Images via Plan A Entertainment, lyrics via YouTube.)