Pristin V's "Get It" Does Not Have It 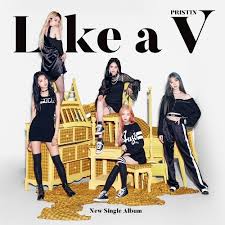 After their debut in 2017, Pristin had a great year, winning four new artist awards and being nominated for several more. Now, the first subunit, Pristin V has made their debut with “Get It”. Pristin V does avoid the main problem with subunits not being distinct enough from the group proper, and has a good concept, but it’s sadly underutilized and the end result is generic.

Pristin V has a double meaning. There are five members– Nayoung, Roa, Eunwoo, Rena, and Kyulkyung— but the “V” also refers to their concept. Pristin proper made their mark with a manic, percussion- heavy sound that screamed of youthful vibrance, while Pristin V plays the opposite role. They’re the villians, and they’re rather delighted to be so. This is a solid concept, and one that has a lot of potential, especially in terms of the MV. Whether they’re driven by vengeance, megalomania, or genuine pettiness, embracing the dark side has a rich history and is fertile ground for a fun ride with Pristin V. Unfortunately, that potential is not lived up to.

“Get It” is almost purely aesthetics, and by aesthetics I mean “dramatic sitting”. There is no plot, there is no real usage of symbolism to highlight the villain concept, there is just a lot of sitting. I would say that Pristin V are chillin’ like villains, except there is no villainy to chill from. Pledis took the time to assign each member a specific type of villainy; why not bring that into the MV proper?

The odd choices of sets and set designs don’t help either. The abandoned warehouse, and grimy, darker locations are fine, and fit the edge of the song, and I’ll give a pass to the 5-sided couch– it gives an aura of vanity and exclusivity fit for villainesses. Even the storage lockers are just benignly strange, but the tennis courts are baffling. The outdoor shots are too brightly lit and ruin the otherwise solid vibe of darkness, seduction and danger, accomplished through strategic lighting a reliance on reds and yellows to play against the black for a sufficiently dramatic look. 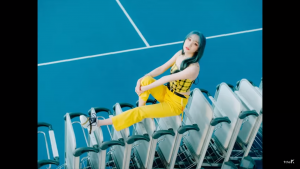 “Get It” itself runs into similar problems. The song is a fairly generic trap banger- serviceable but not really spectacular. However, when pairing the lyrics with the concept, there are a whole host of unfortunate implications that were likely not intentional, but still uncomfortable.

So, Pristin V has the confidence to go make the first move and chase their crush object because they’re villains. Fine, no problem there; no one’s heard of a timed villainess. However, they make reference to heroines as kind and innocent, unlike themselves, as well as having no interest in sweet relationships. None of this is inherently bad, just not traditionally feminine. It gives the idea that confidence itself is evil, and thus Pristin V aren’t confident because they’re villains,  they’re villains because they’re confident. And you believe I’m overthinking this, I am, but “Get It” is extremely bland and picking apart the implications of literally demonizing female self-confidence is far more interesting.

Pristin V had all the tools needed to make a solid subunit– a good concept, solid vocals, a couple big name members to draw interest– but all the potential in the world can’t make up for the fact that “Get It” doesn’t have it. 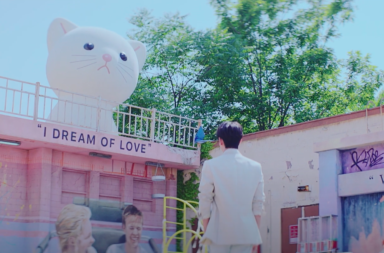 Seventeen is Equal Parts Nostalgic and Fresh in “Ready To Love”