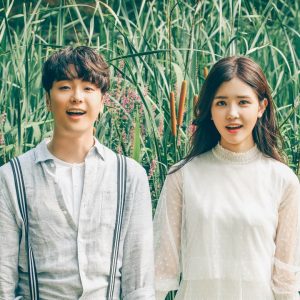 If you’re looking for a new acoustic pop duo to add to your favorite chill Sunday playlist, look no further than Monogram. In the fall of last year Sidus HQ debuted the new duo. Monogram is made up of Kevin, the main composer and vocalist, and Riwon, also a vocalist. They made their debut with a singled album called Diary, which consists of two songs, “The Child” and “Hello, Goodbye.” Both are acoustic pop songs and on their newly released first album, Space Travel, they continue with this sound. They also have a song featured on While You Were Sleeping’s OST called “Lucid Dream.”

Their music focuses on harmonies between Kevin and Riwon over the swell of strings and acoustic guitars. Their debut album is made up of mostly these sounds. Riwon’s vocals are dreamy over the light piano. Kevin helps ground the music with his lower voice while the instrumentals create an airy listening experience.

The song that I enjoy the most is “Long-D.” It’s calm, and soothing instrumental combined with their voices creates an ethereal atmosphere. Unfortunately there are no English translations available for the lyrics, but the English lyrics within the song give an impression that they are singing about a lover who is emotionally distant or unavailable to Riwon and Kevin. The swell of the strings in the introduction before the piano comes in sets the tone for the rest of the song. It feels like a song to listen to while driving at night in the summer with all your windows down.

Both Kevin and Riwon have very clear voices that complement each other well. Riwon has a voice that has clearly been well trained, even if it has the same quality that many indie pop singers have these days. Her solo song on Space Travel, “Little Girl,” is beautifully written and sung. It showcases her talents as a singer in addition to being a nice song to listen to. 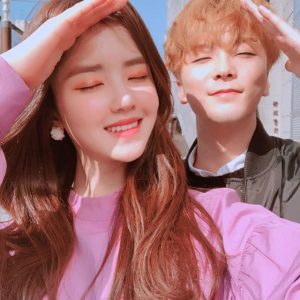 Like Riwon, Kevin also has a clear voice that’s easy to listen to, but also sounds like a lot of other singers. His solo track on their first album is heavily influenced by jazz that suits his voice. He has a good range and tone, but like I said, his voice doesn’t stand out from the rest of the acoustic pop or ballad singers that are currently promoting in Korea.

Together their voices meld in truly beautiful harmonies. The songs that Kevin writes are great fits for them. Most of their songs can be categorized as ballads with their slow and laidback tempos. A couple of them are more uptempo, but for the most part, Monogram’s songs sit solidly in the ballad category. They’re good for a lazy Sunday morning or if you need some good background music to study to.