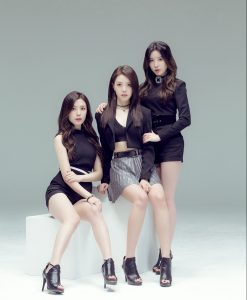 Berry Good debuted in 2014 under Asia Bridge Entertainment and so far the group has experimented with various genres from EDM to piano ballads and dance pop. Much, if not all, of their musical comebacks still rely on crowdfunding and donations from fans and the public to provide viewers with quality material and good song production. Although the group may be struggling to secure a large dedicated fanbase, much to their credit, Berry Good has continuously released good material since their debut most notably in songs like “Don’t Believe” and the addictive “BibbidiBobbidiBoo.”
Berry Good are now taking a more risky approach and debuting their first subunit Heart Heart, featuring members Sehyung, Taeha, and Gowoon. It is very easy to see how this unit differentiates themselves from their main group–“Crazy, Gone Crazy” goes for a much more mature and sexier concept than the members have taken on in the past. The track also carries a confident lyrical narrative urging on a cat and mouse game which the girls are set to win. Taeha opens the chorus and sings:

Baby call me whenever you miss me
In blacknights and daytime
And see if I am waiting for your call
I am in a hurry, I’ve gone crazy

For a debut song, “Crazy, Gone Crazy” surprises with its sleek old-school production and its slow rhythmic instrumental that one cannot help but vibe to. Each member, in particular Gowoon, displayed great vocal control and most importantly demonstrated excellent potential for improvement. Since Heart Heart is only composed of three members, it is crucial for such a small team to harmonize in sync with one another and all three members perfectly succeed in this by never harmonizing out of their vocal range and staying within the tone of the song.
The MV for Heart Heart’s debut track plays on mystery and seduction as the girls get an invitation by an unknown sender who tries to lure in all three members. The cinematography of the video relies on dark purples and pinks when the smooth chorus hits while contrasting shots show the girls in a much more bright but still alluring atmosphere. Thankfully the visual isn’t in the low-quality production spectrum that the fans have unfortunately seen before. It feels like Heart Heart’s company put a lot of thought and money into this new subunit debut in order to attract a different audience that may not be into Berry Good’s regular sweet releases. 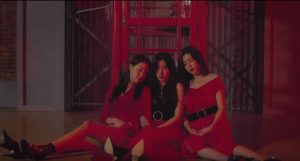 If there is one complaint about Heart Heart’s debut it would be directed towards their live stages, in which the girls seem quite bored and even uncomfortable at times. For such a tame and simple choreography it is strange seeing the members lack in stage presence, something that hasn’t been a problem for Berry Good. The song itself doesn’t really require such a strange dance narrative but either way, this fault is forgivable and I am excited about what Heart Heart has in store for their follow up comeback.
(YouTube, Images via Asia Bridge Entertainment)