Welcome to Waikiki, Ep. 1-8 : A Series of Unfortunate Yet Hilarious Events 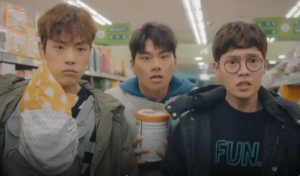 If you’re looking for a light and fluffy K-drama, then Welcome to Waikiki is the show for you. The program presents itself more like a sitcom similar to that of the older American show, Friends, versus your typical K-drama. Every day the characters are getting into silly hi-jinks as they’re trying to achieve their overly ambitious goals and simultaneously keeping a Hawaiian-themed guesthouse in business.

The show has a big cast consisting of three men, and three women who are all down on their luck and struggling to succeed in their respective careers. While that might sound depressing on paper, it’s presented as a comedy as you follow the characters on the rollercoaster that is their pathetic lives. 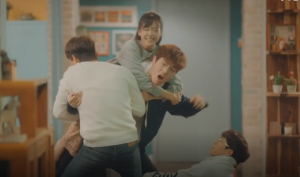 Kang Dong-gu (Kim Jung-hyun) is the serious and short-tempered main character who is usually the most concern with poor success of the guesthouse that he runs together with his friends. Those friends are Cheon Joon-ki (Lee Yi-kyung) the goofy but dedicated actor, and Bong Doo-sik (Son Seung-won) the quiet and introverted aspiring writer. On the ladies’ side, we have Yoon-ah (Jung In-sun) who is a struggling mother still looking for her calling, and Kang Seo-jin (Ko Won-hee) who is an unemployed journalist, and everyone’s annoying sister. Lastly, Min Soo-ah (Lee Joo-woo) is the model diva, and sometimes villain, who broke Dong-gu’s heart.

Though it sometimes seems like the show has no central plot, they’re all always trying to keep the guesthouse from going out of business while also keeping up with their side-jobs or lack thereof. The episodes will tend to focus on one character’s misfortune at a time where they seemingly reach a big break in their career only to fail coming right back down to rock bottom. 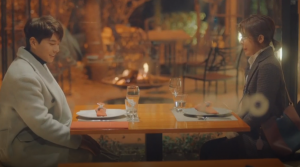 For example, Joon-ki gets the opportunity to star in K-drama as a driver, while minor, it is a big deal and reoccurring work for him. Unfortunately, he gets in a car accident with a woman who he humiliates and berates for her carelessness. He later finds out that woman is the writer of the show and gets tied into a web of lies in which he ends up dating her, and suddenly in a dramatic love triangle with her and the director of the show. Ultimately, the writer kills his character off the K-drama and he’s once again back at square one.

The other characters follow similar scenarios with their own attempts to follow their dreams. Seo-jin is hired but is fired on her first day for attacking her new boss after she witness him trying to force himself on a different employee. Yoon-ah decides she wants to be baker but isn’t able to sell any of her breads and is then fined for selling without a permit. Every day we watch the characters hopes crushed, and it’d be a sad show if not for the fact that they’re able to pick themselves up and have each other as a support system. It’s this aspect that makes the show more heart-warming, and keeps you rooting for the characters. 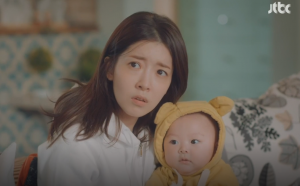 It’s also refreshing to see the show’s more modern take on topics that are often shown differently in K-dramas. For instance, I personally rarely have seen single moms in K-dramas, unless the story is horribly tragic, but upon meeting Yoo-ah she is quickly accepted by the crew. No one made any judgmental remarks over the fact that she isn’t married and is raising a child on her own. They, instead, welcomed her to work at the guesthouse and are always willing to help in caring for baby even going as far as buying her formula and toys. Seo-jin, even inspires and encourages her letting her know that she doesn’t need to see her baby as an obstacle to achieving a career. 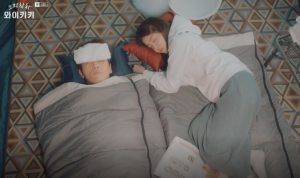 While it’s sometimes just in the background, and lacking in chemistry, there is a love triangle going on throughout the episodes. Soo-ah, while at the peak of her career, breaks up with Dong-gu after four years because of his immaturity and lack of progress in his business and career. Dong-gu is desperately trying to win her back throughout the show while, unknowingly to himself, developing feelings for Yoo-ah. He’s initially annoyed and downright cruel to Yoo-ah and, of course, he’s reluctant to admit he likes her despite acting jealous whenever she becomes closer to another male character. Yoo-ah, while a bit of a ditz on the show, is always sweet and kind trying to do her best to help keep the guesthouse afloat. Due to this, it’s difficult to even want them together. It’s fair to say, at this point, that unless Dong-gu has a complete attitude change, she deserves better than what he’s been offering her. 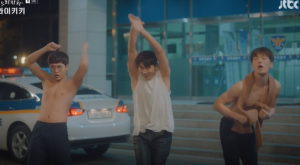 While the show has flat characters and a not-so-exciting romance, if you just want to laugh with a show that doesn’t take itself seriously, then you have to check out Welcome to Waikiki. It’s always fun to see what crazy situation the characters find themselves in, and the actors playing them are excellent in depicting the comedic scenes.

Now half-way through the series, though, we’ll see if the characters will begin to add dimension to their roles or if the show will keep up with its repetitive, yet entertaining, format.

Looking forward to seeing how the show continues in the upcoming episodes and how they wrap up the show.