April are Enchanting in “The Bluebird” 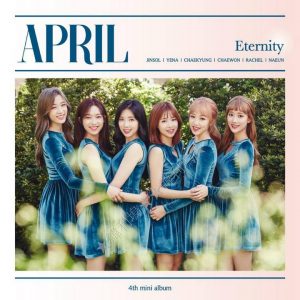 Since their debut in 2015, April have gradually been crafting their sound and image to cultivate a concept that sits somewhere between your standard cutesy girl group and the darker, more mysterious style currently epitomised by Dreamcatcher.

With the storyline for their debut MV, “Dream Candy” hinging on a fantastical unicorn hunt, and “April Story” featuring the girls as miniature dolls in a vintage toyshop, they have built a cohesive repertoire of releases that all evoke an enchanting fairy-tale quality. April’s music videos have set a precedent for exploring the nuance within the intrigue and yearning of K-pop’s puppy-love crushes, and “The Bluebird” is perhaps the most interesting yet.

DSP Media have taken the opportunity to mature the girls’ image a little with this MV. The bright pastel hue of previous releases is muted here, bringing out the jewel-tones of the crimson, ivory and rose-gold that colour the elegant sets. Rachel twirls across a beautifully carved hallway, while Chaekyung tiptoes down a corridor resplendent with flowers and gilt mirrors. But while their surroundings may be stunning, the overarching theme is of entrapment. 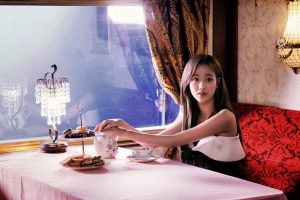 This is most clearly seen in Chaewon’s scenes. Multiple versions of April’s main vocalist mope around a dusty room, each expressing different stages of her frustration as she repeatedly tries in vain to unlock the bright blue door. Meanwhile, hidden away in a gloomy attic, Yena rifles through a wooden toy chest to find a pale-blue teddy bear. And most symbolic of all is Jinsol, singing to the viewer through fluttering white curtains, as she gazes through the bars of a delicate white cage holding the titular bluebird.

As these colours and settings are both more mysterious and mature, so are the lyrics. In the chorus, the girls sing:

I wanna say it all, they say you’ll get sick if you keep hiding
My heart won’t work like I want it to
It gets heavier, the more it grows
I keep getting scared
What if only pain remains?
What if you never see me?
Like a blue bird in a cage

Here the shyness of a crush is described as dangerous and unsettling. It is also interesting that the girls are ultimately alone with their feelings. As the song reaches the bridge, the camera pans away from the sets to reveal that each is interlinked, and that combined, they are inescapable, connecting to the theatre in which the girls perform the choreography shots spliced throughout the MV. For the final chorus, the focus switches from the stage to the audience, the shots flicking between each member in the same seat watching the show. This intriguing interplay of viewer and viewed reflects the central theme of the song, giving the impression that the singer is trapped inside her own thoughts, unable to express her feelings. 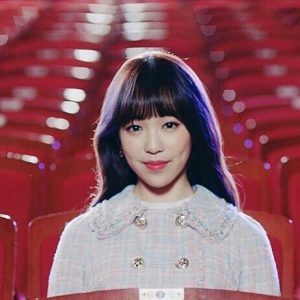 That being said, April do not delve directly into the gothic territory of Nine Muses and Dreamcatcher,

instead maintaining a lighter, more magical tone. Naeun’s train glides through summer skies and fluffy white clouds, each setting gives off its own old-world mystique, and the girls twirl centre-stage in cobalt-blue velvet dresses for the final chorus.

In this way, April’s first love is depicted as a wondrous adventure, as they express their desire to voice their wishes:

On a dark and sleepless night
I looked at the sky and said
Like magic, like my heart
I want everything to start
(I have something to say)

The track itself is an upbeat, dance-pop confection crafted by frequent collaborator e.one. It’s a mid-tempo mix that layers strings and percussion to create a backdrop reminiscent of a film score, but the orchestral influence is sharpened with electronic flourishes. Each gentle verse segues into the song’s signature; a touch of autotune stylizing the pre-chorus into a captivating hook. Its when this subtle build-up breaks into a lush, ornate chorus evoking the MV’s gorgeous settings that “The Bluebird” fully hits its stride. The girls’ evocative delivery and delicate harmonisation elevates a rather pedestrian melody into the hypnotic ebb and flow that makes “The Bluebird” a track you’ll be sure to put on replay.

This comeback is a smart next step for April, honing their niche while allowing them to mature sonically and lyrically, with a darker concept that still holds a touch of magic.