VAV are Elegant and Funky in "Spotlight" 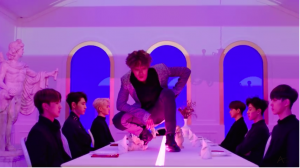 After releasing four singles in 2017, VAV is slowly but steadily building their way up in the K-pop stardom track after track. “Spotlight” opens their year with a strong release, having already racked up over 5 million views on YouTube.

VAV debuted in 2015 under A Team and went through several members changes in early 2017: as of today, the group counts seven members. In 2017 they started collaborating with producer Ryan S. Jhun, who also produced Shinee’s “View” and “Lucifer”, Red Velvet’s “Dumb Dumb” and several Produce 101 songs including Season 2’s theme “It’s Me (Pick Me)”. Ryan S. Jhun is also listed among the producers and arrangers of “Spotlight” with Gionata Caracciolo and ESBEE.

Despite the sincere and sweet romantic lyrics, in my own imagination “Spotlight” is a song for the night time. The song is upbeat, but the heavy bass line definitely evokes a darker atmosphere, much like one of a club. There is no storyline in the MV and the members are seen in several scenarios both alone and in groups; in group shots, only one member moves as the others remain still. While the choreography is not particularly outstanding per se, the members are seen dancing in two different settings, one dominated by light tones and one in contrasting darker tones.

In fact, in “Spotlight”’s music video, the first thing that stands out is the brilliant usage of deep dark tones that create an elegant vibe. Violet and purple are dominant colours, and many scenes are lit using these colours as well. Neon signs are widely used, giving hints of brightness while keeping the surroundings very dark. 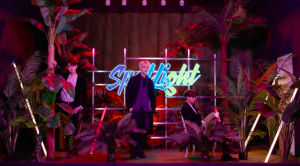 “Spotlight” is a dance song with a heavy funk bass line, allowing VAV to play with the rhythm and use falsetto very cleverly both in the pre-chorus and post-chorus — especially in the second pre-chorus with only ACE’s voice and the bass. Except for some ad-libs towards the end of the song, there is not much belting, as this songs requires more vocal agility than power.

The only part that doesn’t really mix too well with the rest and kind of sounds out of place is the rap. In almost every K-pop group there is always someone in charge of rap, but sometimes it’s better not to have anyone doing it. Ayno and Lou’s rap feel somehow out of place, but part of the blame goes also to the way that their voices were processed, producing a bothersome metallic effect.

In a saturated market such as the K-pop one, it is extremely hard to break through without a powerful agency behind one’s back, yet it is not impossible. VAV are consistently putting out interesting music and managed to work with some impressive producers, which is already an achievement on its own. While results are definitely starting to come, as the YouTube views of “Spotlight” perhaps hint at, one can’t help but wondering if it’s thanks to the group’s merits or to the good producers behind their songs. 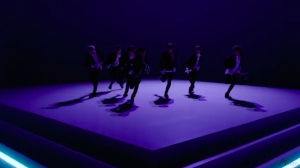 “Spotlight” is the perfect K-pop song, but what do VAV put on the table to make it good? Unfortunately not much, as the group still lacks an identity or a distinct color, which is definitely not good for a group with three years of experience on their back. The song could’ve been well-executed by other groups as well. Still, it’s never too late to build one’s sound to a more consistent one and VAV’s future releases are definitely worth a listen.