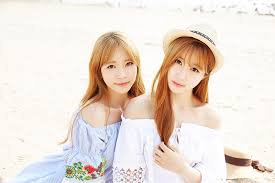 The eclectic duo Cocosori is back with another peppy love song right in time for Valentine’s Day. Its been more than a year since the release of their debut single “Dark Circle”. Sori‘s participation in the reality show MIXNINE delayed production, but nevertheless, “Mi Amor” has hit all the right notes despite the glitches. It is the title track of their first mini album also called Mi Amor (to be released on February 12). The phrase is a term of endearment in Spanish that literally means ‘my love’ and Cocosori deliver this very love.

The tropical house vibe of the song brings to mind images of sunlit beaches and warmth but the MV for “Mi Amor’ deviates surprisingly well from them. The catchiness of the song is juxtaposed with cozy, lovelorn scenes. The music video seems to be a curious cross between a drama and a travel advertisement. But the quirkiness is fitting with the song and elevates the listener’s enjoyment. Principle shooting was conducted in Macau and its landmarks litter the video. A holiday mood is set at the beginning itself when Coco and Sori check into a hotel room and their love affair with a handsome young man begins (Ji Ho-sung).

Coco and Sori are the quintessential friends on a trip, who are both cute with a splash of mischief. The MV delivers these vibes through its heavy dependence on beige and other darker shades. The winter background is perfect for a song on not knowing how to act in front of a crush. There are a few interspersed bits of imagery that make the viewer question their presence but add a lot to the plot. Both Coco and Sori sing their respective parts wearing something akin to a wedding dress; perhaps the extent of longing for a love interest or just the experience of love is brought out through the outfits. There are attempts at making the characters interesting by including phone cases with broccoli motifs (an allusion to “Dark Circle” perhaps) and bags with prints saying ‘I want you to know that’. The constant swooning and clumsiness of the two girls is extremely reminiscent of falling for a person again and again. 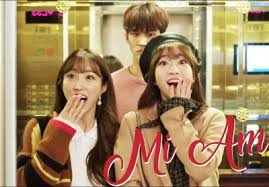 The song itself is predictable since the refrain is repeated several times. But its contrast with cliched tropes such as lovesick girls falling for a cold but sweet man is refreshing. The exaggerated actions of the three protagonists; from their expressions to their dancing and giggles, “Mi Amor” conveys the giddiness that accompanies young love. The song also seems to be a tribute to the duo’s previous releases since it mixes the fun of “Exquisite” with the classic sound of “Wishy Washy”, Coco’s solo debut single. The music is equal parts profound and enjoyable–not an easy feat to achieve–but the MV is unable to keep up. It is constantly whimsical and not in tune with the seriousness that the song demands at times. But the glimpse of a twist at the end binds the MV and song beautifully.

“Mi Amor” changes tracks from the previously immature portrayals of Coco and Sori to more sophisticated personas. The Lolita-esque costumes also give way to formal and chic looks. Not only has their music evolved within the span of a year but so has their MV style. The girlishness of “Exquisite” has been pushed aside to make space for a more put together Cocosori. The bright colors that accentuated the duo’s earlier releases are more restrained this time around. Musically too, the instrumentals that make “Mi Amor” a worthwhile listen, are of a subdued kind unlike the electric guitar bridge in “Exquisite”. It would be interesting to map the trajectory that Cocosori’s music takes. The unpredictable trends in K-pop compel groups to experiment and try every possible genre of music. Cocosori seem to be doing just that with excellent results in my opinion.

It is an incredible achievement for Cocosori to have produced a worthwhile title track through crowdsourcing. It is also commendable that the two members were able to continue collaborating despite their other engagements and solo activities. “Mi Amor” is therefore the perfect track to which to contemplate about love.