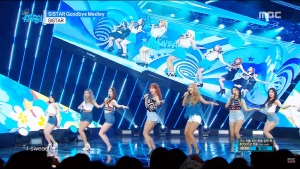 Before we embark on the freshness of 2018, I’d like to share some of my favorite performances from the past year. It’s been quite a magical year, both figuratively and literally on stage. We’ve seen many exciting debuts, as well as some bittersweet goodbyes. Some groups received their first wins, an achievement fans always love to witness. Others broke records with the number of trophies they collectively earned over their full career.

Whether it was fresh or familiar faces, I enjoyed seeing them all. Although, some performances stood out more than others, that doesn’t mean those other stages lacked quality. If anything, it was very difficult to choose from the thousands of solid performances seen in 2017. I loved the cherubic charm of The East Light and NCT Dream. I lived for the energizing routines of Red Velvet, Blackpink, Cosmic Girls, Dreamcatcher, Astro, SF9, VIXX, and Seventeen. I’m also thankful that KARD finally made their official debut.

As much as I’d love to include those artists and more on my list, such a thing would possibly lead to me writing straight into 2019. The cycle would basically repeat itself after that. It’s best to keep the list simple and small, but feel free to add to it with your favorites of 2017 in the comments. By the way, my picks are in no particular order.

This is going to sound controversial, but I had to think about this one. I LOVE me some Sunmi, so picking her wasn’t an issue, but choosing a single performance was. Some of you may side eye my reason for this pick, but it has less to do with her and more to do with her backup dancers. Switching roles is usually done in groups, so Sunmi had to choose something that could work for her as a soloist. What better way to change things up than have your male and female dancers swap parts in the choreography? Sometimes it’s easy to overlook the efforts of backup dancers because they’re not the stars, but in this performance, I felt like they owned the stage along with Sunmi. I commend them all for pulling this off with no awkwardness.

Another example of something that one may argue only matters because they used a prop. Here’s the thing — they used it very creatively. We’ve seen umbrellas utilized in routines yet this presented so many visuals on stage. You have the streaming light representing the rain, then the umbrellas being used to hide and reveal members in slick ways. My favorite part is actually when the members sing their individual parts between passes of spinning umbrellas. A close second would go to the umbrella car, complete with windshield wipers. Call it corny or common if you wish, but this took a lot of imagination to come up with formations that weren’t sloppy and showcased the song beautifully.

I find it so touching and cute when labelmates cover each other’s songs. Day6 put on a medley of their junior group Twice’s hits with their own charming spin. The way they opened with “TT” in such a playful way had me dancing on my bed. Their rendition of each song was such a fun take on the originals. I don’t see a lot of groups cover Twice, so it’s a treat that Day6 took on the task. I’m a little confused by why they were so spread apart on stage, but regardless, I’m here for the pop rock version of whoever else they decide to cover.

Everything about this performance was glorious. The members emoted so well while executing what had to have been their softest steps ever. On top of this, I was actually surprised by the impressive camera work and editing by Mnet. They usually keep the stages bare bones, but this time we got a train station, a bench, and a large cherry blossom tree. The transitions between the two sets was so seamless that I wondered if they hired outside help this time. All shade aside, this truly was a memorable performance that exhibited a gentler side of BTS.

Even though I’m still salty about them disbanding, this was probably the best way any group could’ve ended things. We got a collection of their classic summer jams, and the girls looked spectacular. It would’ve been easy for them to simply promote their last song “Lonely” and move on, but thankfully, the group chose to give fans a final treat. Nothing lasts forever beyond good memories, and I’m sure this is one performance nobody will forget. Thank you, Sistar for all of the wonderful music and performances! I’ll miss you, lovely ladies.

Well that does it for the Best of Weekly Music Shows in 2017. Cheers to seeing even better stages in 2018!