Celina: When I first discovered K-dramas, I was intrigued by the different style of acting and liked that the shows mixed drama with moments of comedy. Ultimately, this type mixture is still what I looked for in a K-drama, although there have and still will be exceptions to the rule. 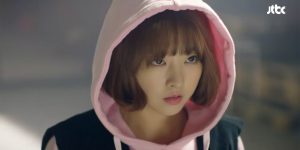 Aside from K-dramas, I also enjoy watching superhero shows like Flash and Supergirl. This is one of the reasons why I absolutely love Strong Woman Do Bong Soon; it was essentially the origin story of a superhero. I watched the protagonist (Park Bo-young) become a better fighter, save her loved ones, and learn what it means to be a hero. In contrast, I was also able to see male characters with macho-man personalities give in to their softer sides.

Additionally, I love the perfect mix of drama with comedy, which is one of the reasons why Andante and Love in Trouble (Suspicious Partner) are also on my list. The mixture of genres helps balance the show for me and keeps me watching longer, unlike others that I may need to take a break from because of all the non-stop drama.

Kabejja, what about you? How did you get into K-dramas, and what do you look for in them?

Kabejja: What attracted me to them was their warmth and emotion as well as their blending of different genres. Both of those elements make K-dramas unique and so different from other countries’ TV shows. Over time, I have gained an appreciation for the range of genres that feature in K-dramas, particularly this year. My list reflects this as well as also displaying my continuing desire for well-crafted shows with well written heroines and heart. It has been a strange, up and down year for me as a K-drama watcher. However, these shows as well as a few others have reminded me why I watch K-dramas. 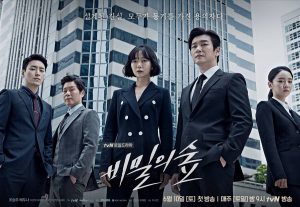 The two shows that fitted my brief and also truly standout this year are Secret Forest and Seven Day Queen. Both shows were written by debut writers yet showed brilliant skill. Secret Forest shone with its gripping complex plot and its detailed, relevant look at corruption. It was especially impressive to see that the writer was able to maintain consistency throughout the show when other shows drop in quality at a certain point. I typically do not watch crime/thriller shows yet the combination of amazing acting from the whole cast and suspenseful writing make this show a must-see.
Similarly, Seven Day Queen is a beautifully crafted tale of love in a time of terror, evoking the passion of Romeo and Juliet. Its poignant storytelling made me connect completely with two leads and their love story. Like with Secret Forest, every single element of the show was near perfect from the writing to the OST. It felt like everything in the show had been done with love and care. For example, the writer’s use of history was very thoughtful. Instead of trying to have a happy ending, the writer stayed true to the story but added some sweetness for the viewer. After it ended, I was in tears as the show had touched me deeply from the beginning to the end.

Celina: I know what you mean when it comes to staying consistent with quality. I’ve started some K-dramas, and then stopped watching towards the end because the quality deteriorates and drags along. 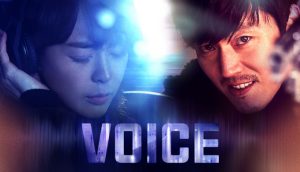 I’m also not a big fan of crime/thriller shows myself, but I started watching Voice out of sheer curiosity after watching the trailer. The drama is intense, and the two main characters (Jang Hyuk and Lee Ha-na) are initially at odds as they learn to work together to save lives, and ultimately solve the murder of both of their loved ones. While writing is important to me too, I’ll sometimes stick with a show because of the characters and acting, and Voice exemplifies this. We’re constantly introduced to new characters who are in danger and I’m personally a fan of watching non-main characters show off their acting chops. Being able to express pain, fear, and urgency in little details like the quivers in one’s voice is impressive to me.
Also, not a common type of show for me is horror but because I’m a fan of Taecyeon, who plays one of the leads, I braved through watching Save Me in which his character tries to rescue a girl from a dangerous cult due to the guilt he felt from a previous decision. This drama was not at all like any other shows I’ve watched and it’s an edgier show than the norm in general for K-dramas. Like with Voice, I was impressed by the acting in the intense and horrifying scenes. The sort-of bittersweet ending for me was also appropriate for the type of show that it was, and why it’s earned a spot on my list despite not being my normal kind of show.

What can you tell me about the next two on your list, and why you chose them? 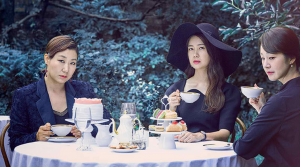 For me, horror sounds like too much but in a weird way, my next show on the list, Avengers Social Club is a revenge drama. However, compared to its counterparts in the genre, the show is much more funnier in tone. In the drama, we follow a team of three women and one schoolboy as they take revenge on the men in their lives. That seems a bit trivial but the show tackled issues like domestic violence and class divides. The female leads are multi-layered and brilliantly bold particularly Kim Jung-hye played by Lee Yo-won. I loved it when she went to other women asking if they wanted to take revenge.

Also, the growing friendship between the women was lovely to see play out on screen. There have been a lot of sismances or womances (whatever you call them) this year, 20th Century Boy and Girl, Age of Youth 2, Go Back Couple etc. What made this sisterhood unique was that the women were much older and mature and also the fact that they were a team working together. 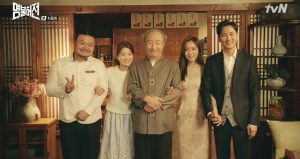 Live Up to Your Name reminded me a bit of Queen In-hyun’s Man, one of my favourite shows ever with the same time traveling romance genre. The show though does distinguish itself with the addition of the medical genre. Kim Nam-gil was hilarious as a Joseon doctor who traveled through time to the present.

Also, the show featured a dedicated, brave yet flawed heroine who got the chance to time travel herself. Typically, it is just the male leads who get to time travel but this time, it was much more equal. Furthermore, the time travel was used well to create the feelings and passions of an epic love story. So many dramas claim to be epic romances e.g. Descendants of the Sun. Live Up to Your Name actually was one.

Celina: I’m actually also a fan of dark comedies so I’ll have to check out Avenger’s Social Club.

For my fourth on my list, the main character was also initially looking for revenge. Love in Trouble (Suspicious Partner) starring Ji Chang-Wook and Nam Ji Hyun.  A jilted lawyer wants revenge against her cheating ex until he ends up dead with her as the main suspect. Throughout the series, she and the male protagonist tackle cases that teach them more about themselves and how to stand up for justice all the while looking for the real murderer. I’m a sucker for love/hate relationships and the tension between Chang-Wook’s and Ji-Hyun’s characters is hilarious.

Another character that I also developed is the main protagonist in Andante who is played by Kai of Exo. This drama was a surprise for me as I wasn’t initially looking to watch it, and didn’t think I would like it when I did. While it’s a coming-of-age drama for the male protagonist, it’s also about the importance of family relationships with a unique death motif. Kai’s character moves to the countryside with his family, and endures the deaths of other characters who he only briefly knows but teach him to love and develop relationships. The casual reverences to death reminds me of Day of Dead which is I celebrate with my family. We don’t look at death so grimly, and talk about it more openly. While seemingly morbid, the show has some heart-warming and comical moments.

I see you also have a family-based drama as your last choice. Why did you choose this one? 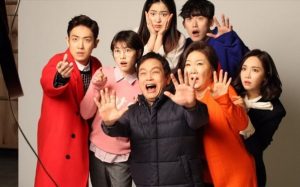 Kabejja: I had not watched family dramas from a while before Father is Strange. However, with this drama, I noticed lot of talk about it in the international K-drama watchers community. Admittedly I started it because of this and I found it wonderfully humorous and heartwarming.  It does follow some of the clichés of the family drama: the new surprise member of the family, the protective parents etc. What makes it an enjoyable watch were the characters who were relatable and lovable in so many ways. This is backed up by the heartfelt performances from the cast particularly Lee Yoo-ri, Lee Joon, and Kim Young-chul. The use of over-dramatising for comic effect was done well and those scenes have become memorable for example the scene where Byun Mi-young (Jung So-min) tries to hide behind Ahn Joong-hee (Lee Joon) to avoid her former bully. While it takes a long time to watch the drama, I would recommend it anyone as a warm, fun drama.

While it is not a family drama, Go Back Couple explore themes of motherhood and marriage through time travel. So many dramas end with a marriage and we tend to see this as a happy ending. The show is a critique of this belief, revealing the struggles of marriages but also retaining some hope. I liked how it focused on these issues and covered them in depth in particular the expectations for Korean mothers and wives. The show also dispelled other K-drama tropes like first love when we see how the male lead idolised the concept. Also, Jang Nara has a standout performance as someone who gets a chance to see her late mother which gives a strong emotional core.
Celina: I also sometimes check out dramas because of the hype, and I’m glad that show delivered for you. What did you like about your last honorable mention? 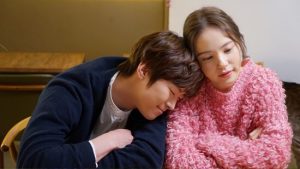 Kabejja: Written by Kwon Hye-Ji, someone to watch out for in the future, Individualist Ms Ji-young is a drama special from KBS. I would describe it as a more polished, mumblecore indie-style version of Flower Boy Next Door. The show is distinctly though its own show showing Kwon Hye-ji’s strong writing ability. Firstly, she is able to write flawed but relatable characters well. The leads are well developed and given great complexity particularly in the case of Ms Ji-young (Min Hyo-rin). We understand her reasons for wanting to hide away from others. While she could have come off as plain unlikeable, the writer shows her as an understandable figure.

Furthermore, I liked the show a lot because the romance is not made out to be the sole solution to her issues. With this drama special and her other ones as well (Dancing the Waltz Alone, Red Teacher), Kwon Hye-ji shows that the future is bright for her as a writer of heartfelt, human dramas.

Celina: Thanks for sharing with us your views on dramas, and I hope 2018 will also be filled with more unique plot lines and impressive acting.

For our readers: Which K-drama was your favorite from 2017 and why? Let us know in the comments.