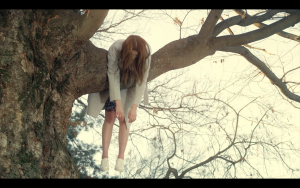 Although marketed as coming-of-age story featuring Kai of Exo as the lead, Andante also contains a family-based plot line with the running theme of death. While the show still relies on typical tropes such as gangster loan sharks, the heartless mother-in-law, and school bullying, it uniquely tackles the morbid topic by balancing it with both comedic and heart-warming moments.

In the first scene, we meet Lee Shi-kyung’s (Kai) desperately trying to keep his online character alive as he’s trying to hide his gaming obsession from his mother. Unfortunately for him, his mother (Jeon Mi-seon) soon discovers he has been skipping out on school to play games at the internet cafe. We also meet his sister, Lee Shi-young (Lee Ye-hyun), an otaku cosplayer with a feisty attitude.

After finding out that her restaurant has been trashed by loan sharks, Shi-kyung’s mother decides to move the entire family to live with her estranged mother-in-law out in the middle of nowhere. Upon arriving to the town, we’re introduced to the eerie yet whimsical figure of Kim Bom (Kim Jin-kyung) hanging from a tree like a corpse which will set the tone for the series.

The main characters, the siblings, tend to come off as unlikable. Shi-young is frequently rude to her mother and even must be picked up from the police station after getting into an altercation. Ye-hyun plays well into her character’s temperament but aside from the two times we see her in costume, we don’t really get to see her express any other aspects of her character’s personality or hobby.

Kai plays an awkward teenager which is, at times, hard to believe when he looks bigger, older, and taller than his bullies. One character even jokes that he doesn’t look like a high school student. He struggles with his comedic scenes in comparison to his costars as he often comes off as unbelievable. However he nails the more emotional and dramatic parts like when he was trapped inside the coffin, which will be touched upon further in this review. As the show progresses, we’re able to see Kai become more comfortable with his character as he changes form a 2-dimensional gamer to having more facets to his personality. 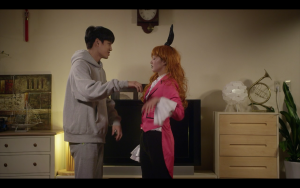 The anti-social siblings might seem like a bit of a turn-off , but it’s clear the audience is expected to watch as these characters mature in their little town. Disconnected from their online forms of socialization, they’re forced to interact with their new neighbors and develop relationships in a more organic way.

The brother’s and sister’s unappealing characterizations is rationalized by their obviously dysfunctional family. It’s inferred that their father passed away, and they have since then been emotionally detached from their grandmother who pushed them away. After noticing Shi-kyung now looks identical to her deceased son, his grandmother begins treating him better than the others in their family. Meanwhile Shi-kyung’s mother struggles to please her mother-in-law who, for reasons yet unknown, is resentful towards her. They also live with their aunt who is at times forgettable character and has hardly added to the story.

The theme of death is recurrent in the three episodes through various characters activities. Shi-kyung, his mother, and his grandmother conveniently all work with dying or dead patients in a hospice that regularly ties in the deceased in some way.

The more notable tie-in to deaths are with Shi-kyung. After witnessing the beat down of a fellow student, his bullies somehow track him down, chase him down, and then nail him into an empty coffin to prevent him from recounting the details to the police. While in the coffin, Shi-kyung cries hysterically until he passes out. Before he does, he recalls his mother’s saying:

You have to die several times in life to become an adult. Is this my first death? 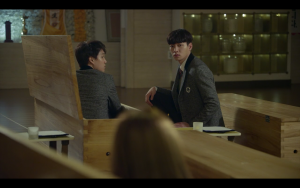 The concept of being reborn will follow along together with the death theme throughout the next episodes as Shi-kyung learns to be more considerate and compassionate — shedding parts of his unattractive characteristics. Despite the traumatic event, Shi-kyung will have to return to the coffin as his school has the eccentric tradition of having student’s write their own tomb inscriptions and must lie in a coffin. Both siblings sadly think of their father during the experiment, further emphasizing that they both have unresolved emotions about him.

Although, seemingly gloomy, as the grandmother says in Episode 2, the town speaks casually of death:

In this town, we talk about people dying as often as we eat.

The show hasn’t yet revealed a central plot, but every episode contains its own conflict and resolution. We watch characters develop as they begin to form friendships and repair previous relationships. In Episode 3, we see Shi-kyung reluctant to serve as the witness for the brutal beating from the first episode even as he hears the victim contemplate suicide. Ga-rum (Baek Chul-min), Shi-kyung’s guardian angel-like friend, tells him a popular story in his town about a person finding a cactus in the middle of the Grand Canyon. The plant symbolized the will to live even in the most dire situations, and yet Shi-kyung still reacts coldly to the situation. However, he empathizes and realizes the meaning of the cactus after hearing learning more while he was cleaning the room of a deceased man. He discovers the man became ill after seeking justice for the death of his son who committed suicide because he was so heavily bullied. Shi-kyung now fears for his friend’s life and bravely rushes to the police station to submit his testimony. 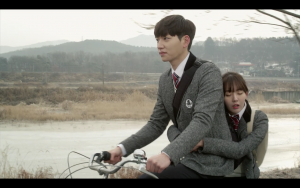 While seemingly a depressing drama, it counters each episode with both comical and touching moments. We see Shi-kyung dramatically drop his smartphone out the window—which is every teenager’s life source. Later on his mother gifts him a pre-historic cell phone which he hesitantly accepts.

We also catch a sweet moment when Ga-ram goes to pick up Shi-young after she accidentally falls asleep on the bus. She happily accepts the ride and falls asleep again as he takes her to school.

Shi-kyung is also intrigued and bemused by Bom who is still mostly a quiet and mysterious character in the show. Similarly to Ga-ram, she serves as a helper to his character like when she also conveniently appears to give him a ride after he misses the bus.

It’s a change of pace to see an Exo member in a family-based drama where he’s likely not to die like his fellow band members. Seriously, have you noticed they all die? Still, it seems even Kai can’t escape death in some shape or another. Andante isn’t perfect — Kai’s acting is sometimes lacking, and the drama still needs to provide a more central plot line that ties in the death motif. However, the drama is promising as it depicts a more casual understanding of death without being either too scary or dismal. Breaking up the emotional scenes with laughter makes the drama more relatable. We can infer from the rare references to their father, that the characters will ultimately need to deal with his passing and perhaps that’s where the main plot will develop towards.

It’ll be interesting to see how this drama develops.