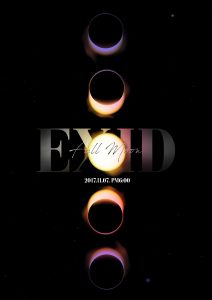 EXID is back as five (mostly)! Their latest comeback, Full Moon, marks their fourth mini-album, and consists of six tracks: two group tracks, and four solo tracks (or in Hani’s and LE’s case, a duet). The title is a nod to the return of Solji, who sat out of Eclipse due to her hyperthyroidism. While she participated in the latest album recording and jacket photos, however, she will not be joining the rest of the group for promotions for health reasons.

Upon first listen, the bold title track “DDD” seems to revert back to their older releases, giving the same vibes as “Hot Pink”, “Ah Yeah”, and “Up & Down”. Certainly, the song structure is quite similar: the beginning is marked by a repeated catchy hook, followed by a straightforward verse with rapping interjections, and of course, an easy chorus which was previously hinted at in the opening featuring a whole lot of high notes. Granted, you could say that about pretty much any pop song out there, but for EXID in particular, it is certainly a path that they have gone down quite a few times now.

The group does try to add a bit of variation, namely, the moody pre-chorus section that adds jarring contrast between the verse and the chorus. In this case, it works beautifully, and adds a mysterious and sensual mood to the overall song. The track, overall, is catchy (I know that I will find myself humming the chorus in the coming few days), and the style is what the group does best. However, it is a little disappointing that there doesn’t seem to show significant growth in terms of their musical style, falling back on their previous hits. 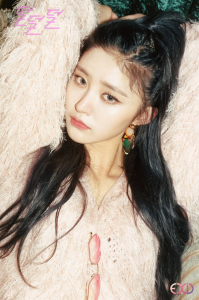 The rest of the tracks are definitely on the mellower side. “Too Good For Me”, the other group track off the album, is more a transition piece with its quick tempo adding an energetic vibe; this is balanced by the soft and smooth R&B vibes. Solji’s solo “Dreamer” is up first, and it’s a rhythmic ballad-inspired track. The group’s leader puts her strong vocal talents to good use in this slightly melancholic and dreamy piece. What I appreciate about Solji’s singing is her emotional expression; she really manages to capture and translate the nostalgic emotions of the song to listeners.

Junghwa’s “Alice” featuring PinkMoon is up next, and the Alice that she is referring to in the title is actually the one from Alice’s Adventures in Wonderland. Like the character, the song is whimsical and dreamy, with soft and delicate vocal lines accompanied by a diverse combination of rhythms and beats. It’s definitely a unique song that suits Junghwa’s vocal colour well, and is probably my favourite off Full Moon.

Hani and LE pair up for “Weeknd”. It’s a comfortable listen with its slightly repetitive structure, with Hani’s mature vocals balancing out LE’s charismatic and distinct rap. Peppered with synth notes and motifs, it attempts to spice things up, but in the end, it is just not memorable enough. Rounding off the album is Hyelin’s “Foolish”, a traditional ballad. Hyelin continues to surprise me with her solid vocals, especially during the last album with the absence of the main vocal, and she shows them off well here. It is a pretty ballad which would totally fit right in as an emotional OST, but that’s about it, there’s nothing special or show-stopping about it. 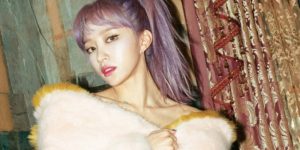 Full Moon is an enjoyable listen with solid tracks, but as a regular listener of EXID’s music, it was slightly underwhelming. With their previous album Eclipse branching out into a more mellow and sensual sound, especially with tracks like “Night Rather Than Day” and “Velvet”, I was hoping that they would continue to grow in that direction or show more diversity in style, but their title track returned to their older style and the rest of the B-sides simply fell a little short this time round.