"Chococo" Is A Step Backwards for Gugudan

Gugudan has had an interesting career for a group on their third single. One of many rookie girl groups with a youthful image and a plethora of members; Jellyfish Entertainment clearly understands the importance of giving Gugudan a memorable image in order to stand out from the pack. Unfortunately, their latest comeback, “Chococo”, has made the tragic error of believing that strangeness is the same thing as memorability.

While their debut “Wonderland” gave them a tooth-rottingly cute image, they took a turn for the confident with “A Girl Like Me”. And while one might think that their very mainstream sound might get them lost in a sea of synthpop, an MV by Digipedi gave Gugudan the edge they needed to gain fans and move up in the K-pop world. Thus, “Chococo” makes sense on paper: it’s another safe synthpop song paired with Digipedi’s signature pastel oddness. However, “Chococo” is a perfect example of why trying to formulate success in such a manner rarely works. 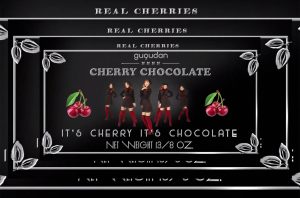 The first thing that truly sinks in upon watching “Chococo” is that it is weird. There are tidal waves of chocolate, being stalked by a nightmarish doll, space chocolate, candy factories, and Hershey’s Kiss hats that I sincerely hope were burned immediately after filming. It’s an MV loaded with bizarre elements. However, the second thought is that “Chococo” is a very boring weird. For all the odd visuals and implied symbolism, there is nothing that truly makes it stick in the mind.

There are two main types of strange that appear in MVs: symbolic and brain-melting. For the most part, Digipedi makes and excels in symbolically outlandish videos. The images might be surreal and nonsensical on the surface, but they are held together by an underlying theme. Elements of this are present in “Chococo”. The intended symbolism is fairly clear: the pleasure of chocolate is standing in for another, more adult pleasure. They are surrounded by it, dream about it, but are forbidden from experiencing it. Eventually, they do experience that pleasure, but under blankets and in closets; hiding from the watchful eye of the doll and the idealized innocence it represents. 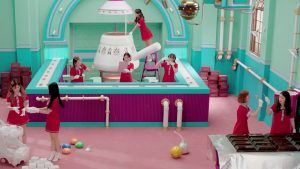 Except all of that falls spectacularly short due to the MV indulging in the other type of MV strangeness: the brain-meltingly bizarre. There are MVs that make their mark by being so off the wall that they implant themselves into the mind and proceed to turn one’s brain turn to goo. Red Velvet has made their mark with MVs in that vein, and was clearly a potent inspiration. Everything about the beginning of the MV– the factory, the shots, even the wardrobe– are right out of “Dumb Dumb”. And yet, it fails at inducing the surreal state intended on it’s audience because it’s not weird enough. Sure, the tidal wave and space chocolates are a touch odd, and Gugudan acting as sled dogs is pretty out there, but the constraints placed on the MV by the symbolic strangeness prevent “Chococo” from being weird enough to truly weird the audience out.

“Chococo” could have succeeded if it was given a tighter focus. The pieces were all in place for another outstanding MV that would have helped propel their career. But the MV is too ambitious for its own good, and proves that it’s better to execute a simple idea well than a complicated one poorly.