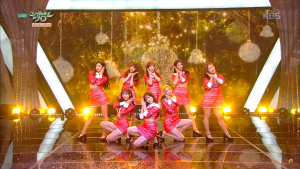 We’re so close to the end of the year for Best of Weekly Music Shows, but things aren’t slowing down. Red Velvet, Samuel, and Lovelyz all had comebacks. The lineup for shows included a lot of faces who’ve been making waves throughout the year. Unfortunately, stages are still somewhat limited due to the ongoing MBC strike and Mnet‘s preparation for the MAMA Awards.

Sonamoo has tried just about every concept imaginable, but their strength lies in more sensual numbers like this one. It looks like SF9 isn’t the only group inspired by Latin ballroom for comebacks. This may not be the most exciting song, but Sonamoo is filling a role once dominated by groups like Rainbow and Secret. They’re open to trying different styles, which is commendable. Not sure if this will be their permanent thing, but I hope they continue on this path.

Holiday music is usually musical death to the ears for its overly saccharine quality. However, this performance has me looking forward to the seasonal festivities. Dressed in darling red outfits, their choreography matches the upbeat tone of this tune. The bubbles are admittedly my weakness, appealing to my inner child. Seeing the group’s bright smiles made me feel all warm and cozy.

They are so clean and crisp. There aren’t a lot of groups who execute moves with as much power and precision as Astro. Their wine-colored suits enhance the mature vibe they’re exuding. Any time I watch their stages, I appreciate the dedication of each member to the performance. If they have any weaknesses, I haven’t come across them.

Their title song is a tongue twister, but mouths should be dropping over this performance. All the members are rude — in a good way. I’ve noticed whenever a group reaches that “first win” milestone, they gain a huge boost in confidence. Not saying Monsta X ever lacked in that department, but it’s evident they’re on a higher level of feeling themselves since winning on a music show. Monbebes, I hope you’re ready for them to become a lot hotter than before.

It’s time to flip a table for the faves! All right, I’m not a Reveluv, but this song can get it. I’m not keen on their outfits (Inkigayo was better), but the reason I selected this performance was for the dance. It’s just so catchy and goes perfectly with the song. It represents their “red” side so well with high energy moves and fun interactions between the members. I don’t care what Red Velvet wears as long as they put on electrifying stages like this.

Readers, what were your favorite performances from last week?