Astro may have debuted as one of the cutest boy bands of 2016, but they have recently made the inevitable shift towards a more mature, more adult sound and image. And while that transition was kicked off earlier in the year with “Baby”, it is their new comeback, “Crazy Sexy Cool”, that cements their new maturity. I mean, the whole MV is about them starting on the path to adulthood.

At first glance, “Crazy Sexy Cool” is another K-pop MV using flashy visuals to compensate for a lack of story. The plot is thin, more akin to a series of connected vignettes than a single tale. But those vignettes are more than just cute clips. “Crazy Sexy Cool” is an MV that is all about the symbolism, communicating its meaning through visual language rather than a story.

One of the most prominent examples of this is the boys’ bedroom. At the start of the MV, we get a good look at Astro’s living quarters, and it looks a skosh childish. Garish bedspreads, possessions spread around like toys, everyone quietly pretending to be asleep; the image painted is one of youthful innocence. Yet, when we return to it at the end, these elements are downplayed in favor of the windows, highlighting the broader world the boys have now entered.

Over and over, we see Astro taking steps towards becoming more mature versions of themselves. They move from brightly lit parks to skeevy-looking alleyways, trade in their pajamas for leather jackets and then tuxedos; as if trying out different types of manhood. My personal favorite is the members all going through a doorway in their closet, though they don’t end up in Narnia. Crossing a threshold into the unknown is a powerful image because even if they return, they can’t go back — the actions and effects of the other side will remain. Even the color palette showcases a more adult version of Astro. They have always been associated with bright colors and pastels, but “Crazy Sexy Cool” trades those in for neon intensity and cranks the color saturation up to eleven.

Then there’s that which incites the song into being: Astro sees what they believe is a woman posing seductively behind a curtain. This moment kicks off an MV filled with Astro’s explorations of their own psyches, by serving as the birth of their sexual, and thus adult, selves, with “Crazy Sexy Cool” as the soundtrack to that exploration. 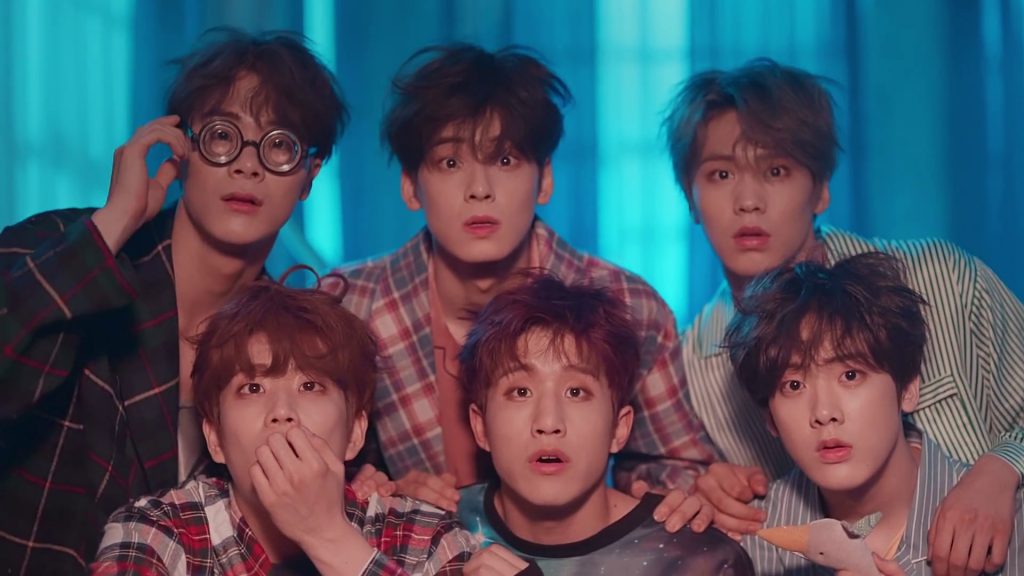 What is most notable, though, is that “Crazy Sexy Cool” clearly frames Astro’s burgeoning sexuality as the first step down a path, rather than having them turn from boys to men in one go. Typically, exploring one’s sexuality is presented as an exclusively female privilege, with boys expected to flip a switch from total innocent to sex god.  They still return to their original positions in their original room. Even when they’re watching the girl, it scans more like teenage boys sharing their first semi-dirty magazine than anything else — especially when it turns out she’s a mop. Still, Astro has clearly been affected; and having taken that first step into adulthood, they’re ready for the second.

Musically, “Crazy Sexy Cool” sounds about like you would expect– it’s a ’90s-influenced R&B number whose primary goal is making Astro sound slick and mature. And it succeeds at that goal. It’s polished and sleek without crossing into hollow, the boys sound believable channeling slightly rawer sound. It also has a wickedly tight groove that brings both some much-needed bounce and a sense of relaxation and light-heartedness to the track. “Crazy Sexy Cool” is still a bit-the-numbers, but it has promise and can easily serve as a viable launching pad for a new sound.

On the whole, “Crazy Sexy Cool” is a solid release from Astro. It’s a good song with a great MV, and should have no problem serving as their doorway to a more mature image, in both sound and style.