Andante continues with its death motif while tying in the importance of family bonds. Shi-kyung’s (Kai) character has grown as he’s become more compassionate and learns how to develop relationships with others. On the other hand, Shi-young (Lee Ye-hyun) has had more of a rocky transition as she continues to react angrily and pushes people away. Ultimately, their social issues circles back to their father, who we now know disappeared 12 years ago.

One of the most turbulent relationships in the drama is between Shi-young and her grandmother as both stubbornly hold their ground during any argument. After her grandmother throws away her beloved cosplay costumes, Shi-young harshly criticizes her for abandoning them after their father’s implied death. Her grandmother couldn’t deal with her son’s possible demise and blocked herself away from the family that reminded her of him. 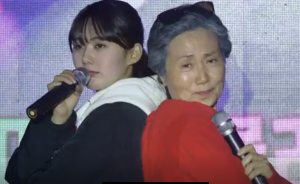 Eventually the two find common ground and bond while learning a rap act in which they comically mock their earlier altercation. Shi-young learns to channel her negative feelings into something creative, and gradually begins to show a lighter side of herself. Additionally, she also touches upon her deeply buried resentment regarding the way her family handled her father’s disappearance.

Shi-young is also constantly bickering with her brother. In fact, Shi-kyung remarks that the reason why he’s so hesitant to having a girlfriend is because the only girl he’s spent time with is his sister whom he can’t stand. Despite what he says, when his sister needed him, Shi-kyung immediately ran to her and was the only one that could understand her through her sobs. He then protectively runs up to the woman who attacked his sister to defend her showing that he still fulfills his big brother role in spite of their differences. 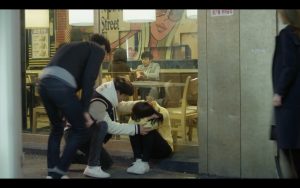 Both are learning that while they may not all always get along with family members, they must still support and love each other. This is a common theme that runs throughout the episodes as we’re introduced to three patients with fatal diseases who are also working on family problems. However, in their case, they are fighting against time having to get this done before their deaths.

Among the sweet and funny moments, Andante manages to tie-in these morbid side stories that help develop the characters. Shi-young grows close to an elderly lady by teaching her how play games on her phone. Despite having experienced the death of a character earlier, Shi-kyung is not desensitized as he sobs for his new friend after she passes away and finds out he won’t be able to complete her final request. These stories work as warning for the main characters, showing them that they must cherish their loved ones while they are still alive and healthy. 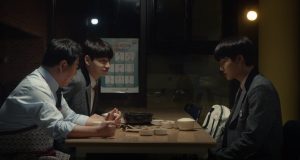 On top of looking to his family more, Shi-kyung’s begins to feel envious of the father-son relationship that he never got to experience. At one point he walks out after seeing his friend’s father prepare rice and meat on a spoon for his friend, and the offers to do same for him. During difficult moments, he also begins to speak out to his father for guidance and waits for signs as if he’s a guardian angel. He’s desperately trying to recreate the father-son talks he’ll never get to have.

Shi-kyung has accepted that his father may be dead, while his sister still clings to the chance that he may still be alive. She also struggles to live up to his legendary scholarly status, and even threatens to quit school because of the pressure. Both are dealing with their father’s absence, but perhaps, being around a town so focused on death will help them get the closure they need. 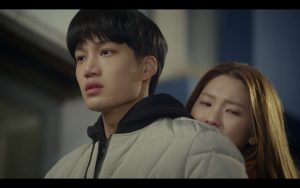 Along with developing better relationships with his relatives, Shi-kyung learns to be a boyfriend for the first time. Andante takes a somewhat realistic angle on relationships as Shi-kyung and Bom (Kim Jin-kyung) both hardly know each other and begin dating due to a mutual curiosity. We see their relationship go through awkward moments as they both are figuring out the other’s personality and how to act as a couple. After finding out Bom lied about where she was working, the two spend days without talking to each other not knowing how to approach the issue. Eventually after running into each other, they manage to talk about it, but can’t resolve things, showing their immaturity and lack of knowledge on how to resolve a problem. Bom clichély runs after Shi-kyung to hug him from behind, which at least shows she’s not willing to let go of their relationship just yet.

The characters are learning how to maintain relationships as they become a healthier family coping with the lost of the father. Connecting with characters who soon die has helped Shi-kyung accept his father’s disappearance, and showed him how to better be a son and brother. However, he’s still young and learning how to deal with a romantic relationship as he struggles to resolve his anger towards Bom’s dishonesty. Shi-young has her moments in which it seems she’s maturing but she continues to throw temper tantrums, and negatively react to any references to her father and his disappearance. 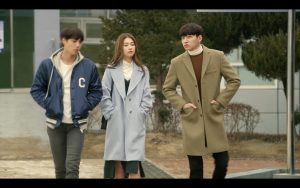 While some may find the show morbid, it’s a refreshing look at the concept of death, and how people choose to react to it. The show continues to offset the depressing scenes with comical and tender moments as the characters learn from the mistakes of those who have passed. Additionally, it’ll be interesting to see if they’ll ever conclusively discover what happened to their father, and if that will be the closure they need to move on.

Personally, I’m looking forward to seeing how the show progresses and further develops these characters.