We "Deserve" More From Kris And Travis Scott 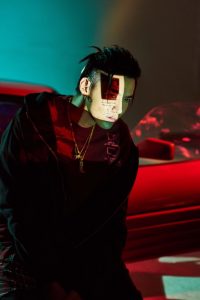 Kris Wu has been busy. Since filing for contract termination with SM Entertainment and leaving EXO, he has turned himself into a household name for many in mainland China, accepting major roles in domestic films and endorsements of high-end brands like Burberry and Bulgari. Kris has taken a more cautious approach with his music, only releasing promotional singles for his movies before releasing “Bad Girl”, “July”, and his single album 6. Eyeing a forthcoming advancement to the U.S., he has stated that his full album is slated for an early 2018 release, and will reportedly be in English.

That still didn’t quite prepare me for the news that Kris had partnered with Houston rapper Travis Scott for his latest single, “Deserve”. Signed to Kanye West‘s label GOOD Music, Travis Scott is currently one of the biggest names in the U.S. hip-hop scene, and with good reason. Following the success of his breakout hit “Antidote”, Travis Scott engineered one of the most distinctive musical styles in hip-hop today, with trap-influenced instrumentals — ranging from experimental in Rodeo to sparse in Birds in the Trap Sing McKnight — behind a liberal use of autotuned vocals and ad-libs. And that’s not even taking into account his live performances; Travis Scott’s greatest strength lies in his abilities as a performer. Always equipped with an autotune effect on his mic, he is unafraid to go melodically off-tune as he works the crowd into a frenzy with his infectious energy and surprising vocal range onstage.

As if it wasn’t clear enough from the lengthy introduction, I am a big fan of both artists. A classmate’s meltdown during the fiasco of Kris’s departure helped me gain more than just a passing interest in K-pop, and I’ve been keeping tabs on Travis Scott since his work on Kanye West’s Yeezus. I was also pleasantly surprised when Kris decided to perform his hit single “6” in Travis Scott’s signature autotuned style during his stint as a judge on The Rap of China. But all of this boils down to utter insignificance to the fact that “Deserve”, whilst a perfectly acceptable pop song, is also rather disappointing for both artists.

It starts off well enough, with Kris delivering his verses whilst Travis Scott helpfully delivers his trademark ad-libs in the background, adding a big dose of familiarity and energy to the track. However, on the second half of the song, the track seems to lose energy and excitement, and one wonders why. Maybe it was the fact that Travis Scott’s verse was almost pathetic in its brevity. Maybe it was the lack of Travis’s ad-libs later on. Maybe it was the honestly unmemorable melody. Either way, “Deserve” burns out near the end.

Lyrically, the track details both artists’ encounter with a girl they think deserves it all, but even though Kris tries his best, and his enunciation has noticeably improved, his bars still aren’t anything special. The overdone concept doesn’t help matters.

And that body on you girl, I promise that’s impressive
Rollie on my wrist, I’m trynna chill, but still I’m flexin’
Baby, you a star and all these others girls is extras (yah)
I been on the block, I’m trynna build with you like Tetris, oh (straight up) 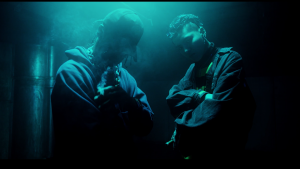 The same must be said for Travis, who admittedly was never famed for his lyrics in the first place (‘stroke my cactus’ being a particularly memorable line from his Birds in the Trap sing McKnight), and delivering nothing particularly memorable with whatever little time he was given. Whatever crazy energy he has whilst performing live sadly doesn’t often translate well into his songs and features, even less so with so few bars.

I might write a song about you tonight (you tonight)
You the perfect melody for the life (and what I like)
Let me make you famous, Michael Jackson dangerous
You my favorite song, add you to my playlist (oh)

This is where I’m afraid I must rant. I’ve watched my fair share of hip-hop music videos, Korean and English, and it’s sad to say that I’ve already come to brace myself for the tropes and cliches within them that inevitably accompanies songs mostly about sex, money, and drugs. Some, like Travis Scott’s “Goosebumps” and DPR’s “Eung Freestyle”, use editing and visual effects to great effect. Some, like Kendrick Lamar‘s “Humble”, utilizes great cinematography to elevate an already infectious track. Sadly, “Deserve” underperforms on both counts. It is already a rather basic track, but with an equally basic video, all of its flaws are thrown into greater relief. 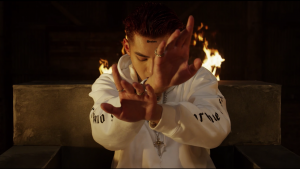 In one shot, we have Kris on a rather uninspired throne, with an ornamental girl on the steps proclaiming him as Kris Wu, First of His Name, the Dragon, Breaker of Chains, and Father of — who am I kidding, the girl does nothing but look pretty. Then, you have Kris and Travis Scott on a monster truck, which would have been exponentially more exciting had they actually driven or rode the vehicle in question. Otherwise, what would be the point? It would even have served as a nice reference to the album art of the Deluxe version of Rodeo, but no, they’re content to simply pose on it, along with other girls that do nothing but look pretty. This is preceded by the both of them having flaming drinks with girls, which is nice on its own, but isn’t utilized enough. All of this is hardly uncharted territory, and with so many other videos that have covered the same uninspired concept, “Deserve” looks basic in comparison. Hell, even Jackson’s “Papillon” — as misguided and unnecessary as it was — had better production value and cinematography than this.

As a track itself, “Deserve” is unobjectionable. If it came on the radio, I would probably bump to it, even if I couldn’t remember its melody or lyrics afterwards. Given what I know these two artists are capable of, however, I can’t help but feel that my high expectations were dashed. Kris is clearly capable of more. Travis surely could have done better. For a song where east meets west, “Deserve” comes up short. One hopes Kris has more in store of us for his full-length album next year, with better music videos to boot, and that Travis returns to his more exciting, experimental style in the vein of Rodeo for his upcoming album Astroworld.